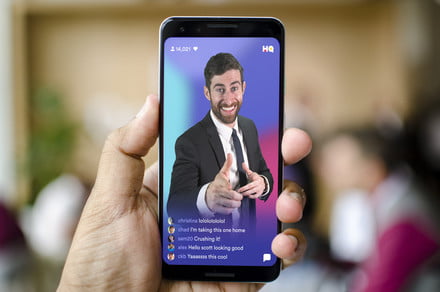 HQ Trivia has made a surprise comeback just when we need it the most. A little over a month later it was shut down, the live quiz show alerted its users via a push notification about a new game session on Sunday night. The company has been resurrected by an anonymous private investor, claimed its host on air.

The New York-based startup abruptly went out of business about a month ago in February after its founding CEO Colin Kroll passed away and it continued to run into financial troubles. Co-founder, Rus Yusupov tweeted a few days later that the show could soon return in a “new home” without sharing any concrete details. “In its new home, we should expect HQ to go through some changes, especially to cover expenses, and be less buggy,” he commented on Twitter at the time. Last week, the company’s official Twitter account sent out a mysterious tweet writing nothing more than an ellipsis possibly hinting at this relaunch.

In a tweet, host Matt Richards confirmed the live trivia show was indeed returning. Richards added that players whose rewards were stuck when the company went under will also be able to soon cash out. A spokesperson told The Verge that this wasn’t a one-off event and episodes will begin to air more regularly in the future. However, the newly funded company is still figuring out the final schedule and the timings.

For its Sunday return, the prize pool was set at $1000 and Richards offered extra, free lives as well as 500 coins to everyone. As a result, more than 10,000 people won; each earning 9 cents or 10 cents apiece. The session also included several public service announcements that address the spread of the coronavirus pandemic.

HQ Trivia returns at a time when millions across the world are stuck in their homes as the novel coronavirus pushes countries in indefinite lockdowns. With a lot of people now seeking new forms of entertainment to keep them company, the three-year-old live game show could capitalize on the situation to regain its popularity — which in its prime was drawing millions of players every day.