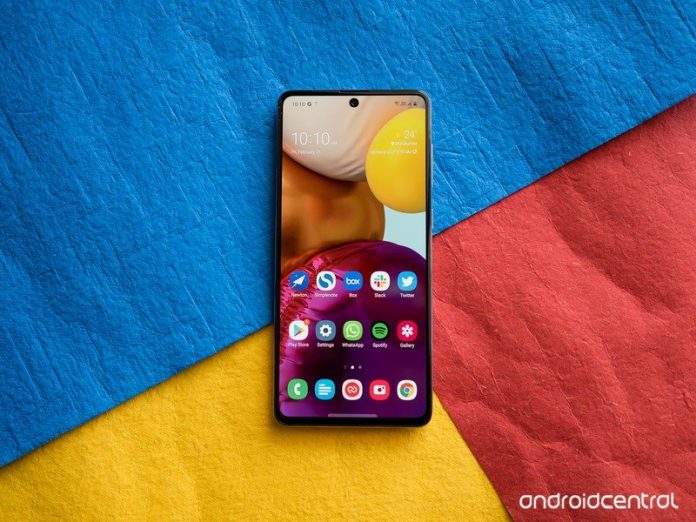 The Galaxy A71 has a 64MP camera and beefier internal hardware, making it a fantastic mid-ranger in 2020. 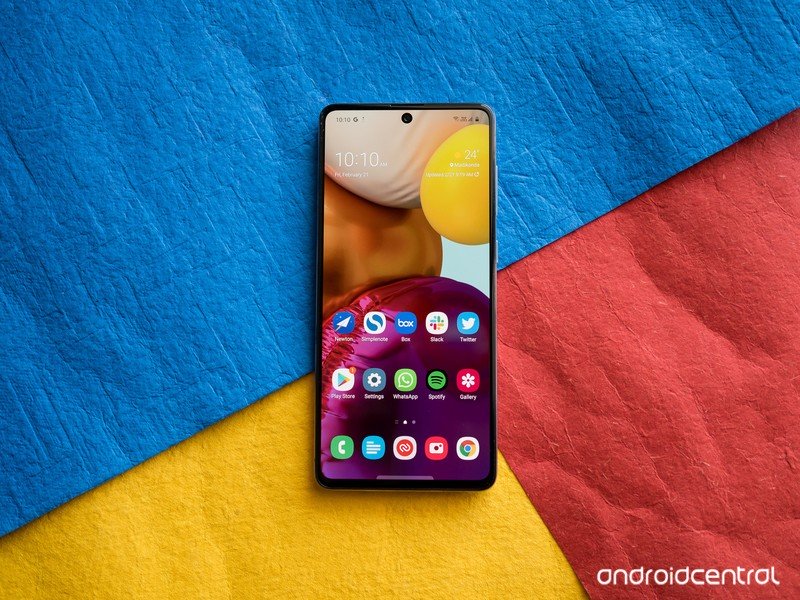 Samsung increased the breadth of the Galaxy A series last year, rolling out new models to hit price points all the way from $120 to $600. One of the standout phones in the series was the Galaxy A70. The phone featured a Snapdragon 675 chipset and had exciting upgrades elsewhere — it was the first Samsung phone to offer 25W fast charging.

The South Korean manufacturer is refreshing the Galaxy A series for 2020, and the Galaxy A71 offers a range of upgrades that make it a great mid-range phone. You now get a 64MP camera at the back, and there’s a 5MP macro lens as well. Samsung has outfitted the phone with the beefier Snapdragon 730 chipset, and the design has also been updated. This is what you need to know about the Galaxy A71. 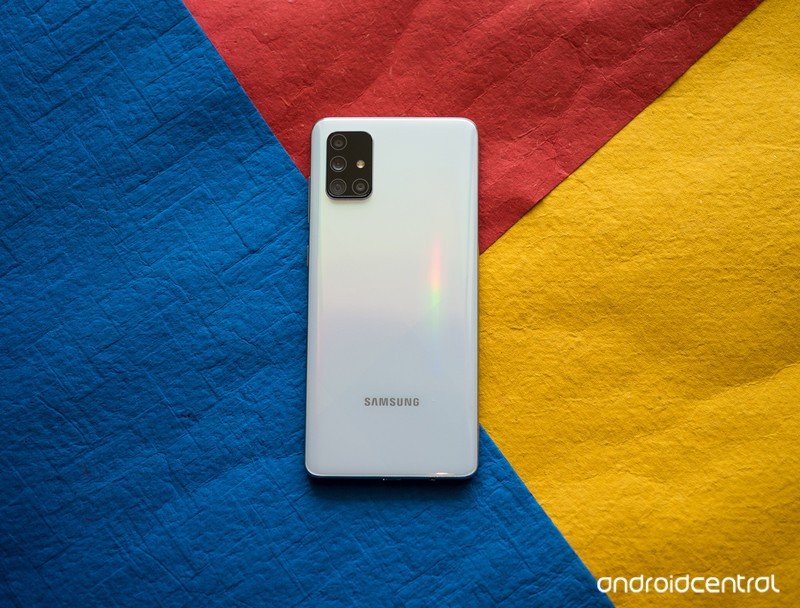 The Galaxy A71 is an evolution of the A70’s design — the diagonal lines criss-crossing the back create a two-tone effect, and there are subtle patterns this time around that make the colors shine. There are new color options to choose from, and the phone has a lot going for it on the design front. It still has a plastic back, but there’s a laminated finish that gives it a glass-like feel, similar to the Galaxy S10 Lite.

But the biggest change at the back is the rectangular camera housing, which is identical to what you get on the Galaxy S20 series. It’s clear that Samsung wants to maintain a consistent design language across all of its devices, and for what it’s worth the module looks just fine at the back of the A71.

The Galaxy A71 combines a striking design with a gorgeous AMOLED display and robust internal hardware.

Up front the major change is the switch to an Infinity-O cutout. The front camera is now embedded in the screen, and that gives it a cleaner look. The screen size itself is unchanged from last year, and the 6.7-inch panel makes the Galaxy A71 one of the largest phones in Samsung’s portfolio. The screen also has the same Gorilla Glass 3 protection as last year.

Samsung outfitted an FHD+ Super AMOLED Plus display this year, with the new panel offering better brightness and more color vibrancy. As you’d imagine, the panel itself is one of the best you’ll find in the mid-range segment. You also get an always-on display and the same customization options for AOD as you’d find on Samsung’s flagships.

There’s an in-screen fingerprint reader that works reliably enough, and you also get face unlock. The latter relies primarily on software, and isn’t as secure as fingerprint authentication or a passcode. Rounding out the design, you get the power and volume buttons on the right, and there’s a 3.5mm jack at the bottom next to the USB-C charging port. You also get a SIM card tray that can hold two nano SIM cards and a MicroSD card.

One of the more exciting changes on the Galaxy A71 is the switch to the Snapdragon 730 chipset. The 11nm Snapdragon 675 on the A70 turned out to be a decent chipset, but the Snapdragon 730 is built on the 8nm node, offering better energy efficiency figures. You also get better performance from the 2.20GHz Cortex A76 cores, and the chipset is particularly great for gaming.

Samsung is selling the A71 with 6GB or 8GB of RAM, and both models feature 128GB of UFS 2.1 storage. I used the phone for just under a day, and in that time I didn’t see any slowdowns whatsoever.

The 64MP camera gives the A71 a sizeable upgrade on the camera front.

Things are unchanged on the battery front as well: you get the same 4500mAh battery with 25W of fast charging. I’ll have more about battery life statistics in my full review, but if the A71 is anything like the A70 in this regard, you don’t have anything to worry about.

The A71 also comes with Samsung’s latest One UI 2.0 based on Android 10. There’s a whole load of new features in One UI, and it’s great to see Samsung not leave out anything in its mid-range devices. Barring a few hardware-driven features, the UI is identical to what you’ll find on the Note 10+. 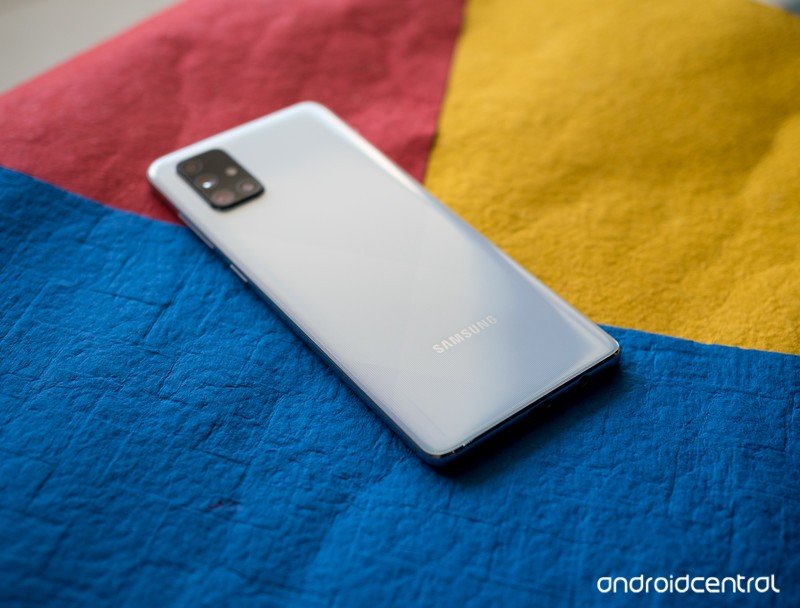 With the Galaxy A71, Samsung retained whatever worked on the A70, and rolled out tangible upgrades in areas that actually matter. The 64MP camera makes a huge difference, and the design makes the phone look much more modern. The Snapdragon 730 is a known quantity at this point, and it is one of the best chipsets Qualcomm rolled out in recent years. Samsung’s decision to use it in the A71 makes the phone one of the best mid-rangers in 2020.

The Galaxy A71 is now available in India for ₹29,999 ($416), and that’s a fantastic deal when you consider what’s on offer here. The phone will be making its way to global markets over the course of 2020, and it’s estimated to retail for under $500.

Featuring a Snapdragon 730 chipset and a 64MP camera, the Galaxy A71 is one of the best mid-range phones you’ll find in 2020. The design has received welcome updates, you get a massive 4500mAh battery with 25W fast charging, and it comes with One UI 2.0 based on Android 10.