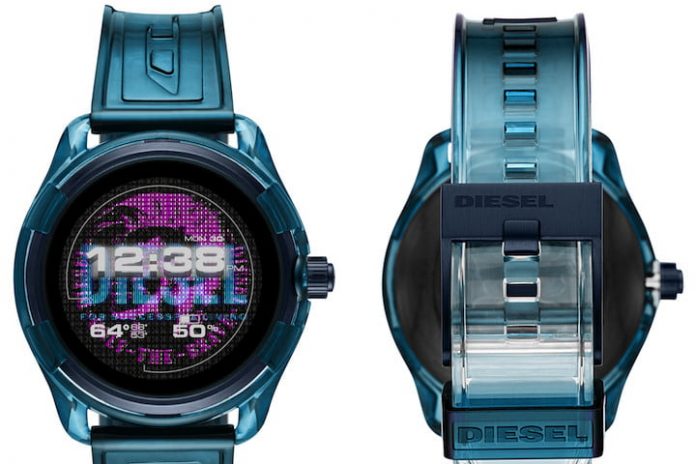 Diesel has taken the stunning translucent body and strap design showcased on its best-looking traditional watches over the last few years, and given them a smart makeover, resulting in the beautiful Diesel On Fadelite. Both the case and strap are translucent and come in four different colors, three of which “fade,” hence the name.

An all-translucent version is joined by a blue-to-clear model, a black-to-clear model, and a red-to-black watch. The four are typically Diesel — striking, individual, fashionable, and clearly influenced by the brand’s clothing and watch ranges. The straps have an embossed Diesel logo stamped on them, while the case is made from nylon for lightness and durability. The only button on the case is a large crown.

Diesel has been steadily shrinking the size of its smartwatches, with the On Axial coming in at 44mm, and the new On Fadelite at an even more manageable 43mm. This reduction in case size means the On Fadelite will suit both large and small wrists, and the color choice should attract both men and women.

We’ve always been fans of Diesel’s cool smartwatch dials, too, and there are more interactive ones on the Fadelite, including one with a spinning globe to show multiple time zones. Additionally, there are two new faces from the artist Mad Dog Jones. Diesel has revealed it will release a special edition watch with the artist later in the year.

How about on the technology side? The On Fadelite uses Google’s WearOS software and has Qualcomm’s Snapdragon Wear 3100 platform inside, but only 512MB of RAM and 4GB of internal storage space. This is unfortunate given there are higher-specification versions of the Snapdragon 3100 available. Previous Diesel smartwatches have suffered from small amounts of RAM, especially when using the flashy, highly animated watch faces.

Other features include a heart rate tracker on the back, NFC for Google Pay, onboard GPS, and the ability to connect to either an Android phone or an iPhone. The watch is swim-proof and has Google Fit integration for fitness tracking, plus there is a selection of pre-installed apps including Spotify for music streaming.

Diesel will release the On Fadelite in March for $275 or 250 British pounds.