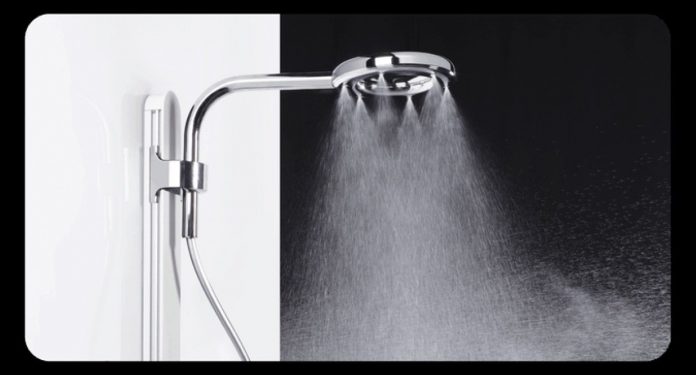 Back in 2015, Tim Cook threw his weight behind a water-efficient shower head called Nebia, which sprays in a way that uses less water, but still keeps people warm. It doesn’t have an Apple logo on it, but looks like something the company would design – if it made bathroom hardware.

Today, Nebia unveiled a new version of its shower system, and some of the interesting backstory behind Cook’s arguably left-field investment choice has also come to light.

According to Bloomberg’s Mark Gurman, the Apple chief reportedly made his decision off the back of first-hand experience with the product, after he serendipitously stepped under a prototype at his local gym in Palo Alto, California.

Philip Winter, who helped create the Nebia, told Gurman he managed to persuade fitness centers in Silicon Valley to run pilot tests of the eco-shower, and after installing the prototypes he would wait outside locker rooms to get feedback. That’s when he met Cook.

Cook was drawn to the environmental aspect, according to Winter, who asked the Apple boss if he’d be willing to make an investment. Despite the first prototype being “crude,” the Apple CEO was excited about the product because there hadn’t been much recent innovation in the shower market. He also appreciated the design, Winter said.

Cook subsequently backed Nebia and also went on to contribute in later financing rounds. The startup has raised almost $8 million in total, according to Crunchbase.

Winter said Cook had invested a “significant” amount of his own money in the eco-shower head and advised Nebia on suppliers. He also pushed the startup to prioritize user experience, design and sustainability. According to Winter, Cook’s input came in a series of emails that were “very long, well crafted and detailed.”

The new Nebia, launching today on Kickstarter, is a smaller and less expensive version of the one Cook originally tested first-hand, but it’s the result of a two-year partnership with faucet maker Moen that the Apple boss supported. The Nebia by Moen starts at $160 on Kickstarter, and will eventually be available for $199, down from $499.