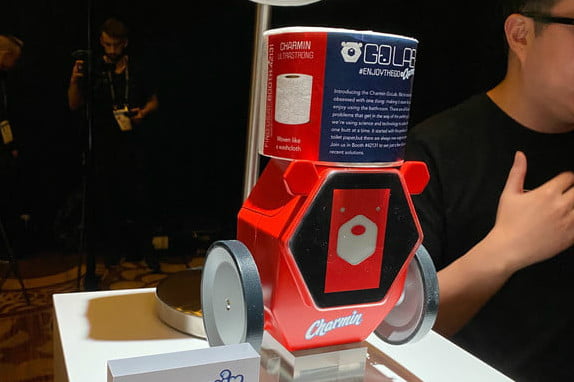 Every CES, the stars of the show tend to be the glitzy TVs, swanky cars, and mighty laptops. Go spelunking in the caverns of CES, however, and you can dig up some intriguing finds. The show is home not just to big companies, but also to dreamers, innovators, and the occasional mad scientist. Here are some of the strangest things we saw at CES 2020.

Robots: They build our cars, vacuum our floors, and now they even serve us delicious, melted cheese. Hailing from Switzerland, this pair of robotic arms practices the ancient art of raclette by heating up a wheel of cheese and scraping the top layer of gooey goodness onto a plate. Is the raclette industry in need of automation? Who knows? What we do know is that this machine moves with impressive finesse.

There’s no situation more dreadful than sitting on the toilet, reaching for the TP, and realizing that you forgot to switch in a new roll. Now you’re sitting there, adrift on a sea of disaster, the situation growing more precarious by the second. Charmin’s RollBot, an adorable two-wheeler robot that can carry a roll of toilet paper, is the high-tech solution to this bathroom nightmare. Simply press a button on your phone, and RollBot will ride to your rescue. No more yelling frantically for your roommate to toss a roll your way.

Fresco Eva Mini: Like a Keurig for olive oil

It’s all there in the tagline: Fresco’s Eva Mini is a Keurig-esque device that turns a flash-frozen pod into a serving of fragrant, delicious oil. Simply pop a pod into the machine, press a button, and watch as liquid emerald pours into your cup — you did remember to put a cup down, yes? According to the people at Fresco, the flash-freezing process allows the oil to retain its nutritional value and flavor, so it will be as if you were pressing olives in Calabria. Unfortunately, the Eva Mini is only for sale in Italy at the moment, although Fresco says it is looking into international distribution.

CharaChorder: The alternative to keyboards

Have you ever pondered your keyboard? Look at how strangely it’s laid out: Why QWERTY? Why WASD? The standard QWERTY layout has been around for more than a century, its reign only occasionally threatened by upstarts (it never even began for you, DVORAK). The folks at CharaChorder have a radical new vision for typing that consists of two controllers, each with nine little joysticks. Each stick has four commands — such as individual letters, or commands like “enter” — assigned to directions. Like playing a piano, you can finger multiple “keys,” pressing all the letters of a word to type that word instantaneously. It promises much faster typing than a classic keyboard, and in the demonstration I saw, the employee may as well have been playing Chopin.

Cyrcle Phone: The phone that is circular

Did you ever notice that every phone is rectangular? Look at your phone, look at your friend’s phone, look at the phone of the person sitting to your right, look at the phone of the menacing person standing right behind you. Phones and corners simply go together … or so we thought. The makers of the Cyrcle Phone offer a different vision, a rounder vision. According to the company, the phone was designed with a Gen-Z, female audience in mind. The size and shape of the Cyrcle Phone are better-suited to small hands and the shallow pockets that plague women’s pants. Allegedly, the kids these days like to listen to music together by sharing headphones, so the Cyrcle Phone has two audio jacks built in — your move, Apple!