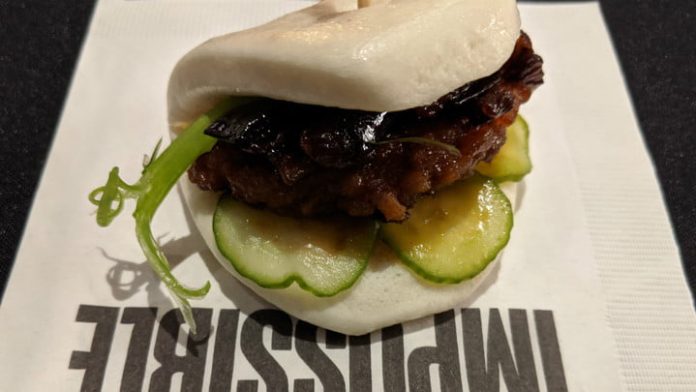 Although CES is a trade show typically known for TVs, phones, and huggable robots, Impossible Foods stunned attendees in 2019 with the Impossible Burger 2.0, a plant-based ground beef alternative that looked, tasted, and even bled like the real thing. It was wild for a food product to dominate CES awards, but Impossible has leapt right over the sophomore slump with its follow-up, Impossible Pork.

We loved the Impossible Burger — we even gave it our award for Best Tech at CES — and although I went into my first taste of Impossible Pork with a little skepticism, by the time I finished my first appetizer, I was happier than a pig in mud who had just learned that he would never be ground up and deep fried.

Pork is versatile: Fry up a patty for breakfast, stuff some into a dumpling, or caramelize it and serve over rice. To debut Impossible Pork, Impossible Foods took us on a tour of Asian cuisine, serving up meatless katsu, shumai, char siu buns, meatballs, dan dan noodles, and banh mi, an international menu that showed off not just how delicious the fake pork was, but how easily it slots into any recipe.

Impossible’s secret ingredient, the one that made their burger “bleed” like the real thing, is  heme, an iron-rich molecule that gives meat flavor. It’s also found in plants, and by engineering it from soy, the company can replicate the taste of meat without harming a hair on a pig’s chin.

Beef trumpets its flavor through any blend of spices or condiments. Even if you overcook a burger — like so many fathers on backyard grills — it will be recognizable. Pork has a milder flavor, and so other factors, like texture, are crucial; the succulent, fatty quality can often make or break a pork dish.

The Impossible Pork perfectly emulates the velvet feel of the real thing, thanks to coconut oil. The shumai (sadly devoid of shrimp, although hopefully Impossible is working on that) arrived resting in a shallow pool of its own juices and exploded with flavor when bitten into, just as a traditional dumpling would.

Even the color of the pork was immaculate. The slice of banh mi revealed the pinkish-gray color one expects.

Having gorged myself on all the Impossible Pork hors d’oeuvres, I had no doubts about the quality of the product. In taste, texture, and appearance, it was a perfect copy of pork. Since the company’s goal is to eliminate the need for actual meat, they’re on the right track.

An issue of price

Although it’s delicious, pork, like every meat, is an environmental disaster when produced at a huge scale. Animals require large amounts of feed and water to satisfy the demand of eternally growing markets. The factories that produce a lot of that meat often spew waste into water supplies and carbon emissions into the air. The antibiotics used to keep livestock healthy are contributing to the rise of antibiotic-resistant bacteria.

If presented with the opportunity to eat an Impossible Pork dish or the real thing, free of charge, I see no reason to choose the latter. The one doubt I have about Impossible’s ability to toss the pork industry into the dustbin of history is price.

When I spoke with J. Michael Melton, Impossible’s head of culinary, in December, he told me the company’s biggest challenge was overcoming the stigma that plant-based meat can’t taste good, and Impossible Pork, like its predecessor, smashes that stigma like a tenderizing mallet. Price is another matter. Impossible Burger currently costs more than ground beef, with a 12-ounce package retailing for $8.99, and given that ground pork is pretty much the cheapest meat around (I can get a pound for $4 at my local grocery store), Impossible will need to work to make its product easy for anyone to afford.

Although the company hasn’t announced any pricing for Impossible Pork, David Lee, chief financial officer, told me that the company is confident it can compete at scale. If the planet is to survive the relentless demand for more meat, compete it must.

Facebook
Twitter
Pinterest
WhatsApp
Previous articleCES has a strange relationship with cannabis tech, and it just got even weirder
Next articleBoeing discovers another potential issue with the troubled 737 Max