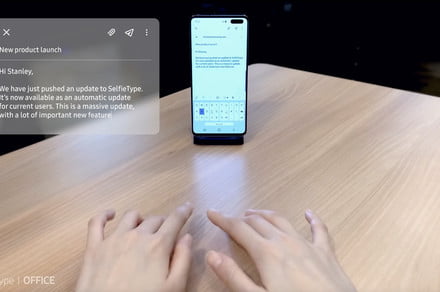 Keyboards come in all shapes and sizes, you can fold them, use them across multiple devices, and even enjoy their ergonomics. At CES 2020, though, Samsung has an interesting conceptual take on the keyboard. It’s one that you can’t even physically see — an invisible A.I. powered keyboard dubbed the SelfieType.

Although the concept of an “invisible” keyboard isn’t new, Samsung’s conceptual SelfieType looks like something straight out of a science fiction movie. Though existing products like the Celluon Magic Cube Laser Projection Keyboard need to be connected up to a device, Samsung’s conceptual keyboard is a bit different. Instead of using lasers or projection, SelfieType uses your phones’ existing front-facing camera to track your hands as you type on any surface. It is powered by machine learning and can turn the individual movement of your fingers into keystrokes.

The concept is apparently available for private demos at CES, but this isn’t something that the general public can test. For the rest of us, a promotional video also shows how it works.

You can simply place your phone on a table and begin typing. You’ll see your device’s onscreen keyboard pop up and the letters will be highlighted on the screen as you move your fingers on your table in the real world. Samsung’s video also shows how it works with a tablet, for those times when you’re in a meeting and wouldn’t want to drag in a physical keyboard with your device. However, SelfieType may only be compatible with Samsung products. The demo video showcases a Samsung Galaxy Fold phone as well as a Samsung tablet.

It’s unknown how accurate the SelfieType keyboard actually is, but it looks to be pretty promising. If it holds up to become an actual product, this would also mean that you no longer need to travel around with a physical keyboard if you want to type on your phone or tablet.

According to The Verge, the conceptual product was developed in Samsung’s C-Lab, its Corporate Startup Incubation Program. GameSpot reports that the experimental products as part of this program have eventually launched, so there is hope you may get to try it yourself at some point.