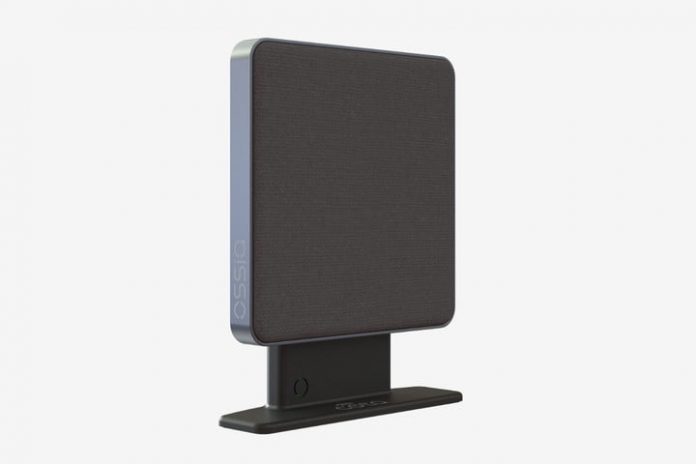 The dream of a truly cable-free future, with wireless power over distance supplied by a kind of power router, has generated a lot of excitement over the last few years, but its development has been stifled by a number of challenges. Charging our gadgets without having to plug in would be undeniably handy, but doing it efficiently and safely is far from easy. Ossia showed how the idea might be realized today with the unveiling of the Ossia Cota Home at CES 2020.

At first glance the Ossia Cota Home could be mistaken for a speaker, but this 30 x 30 centimeter device is actually a power transmitter designed for the home or office. It’s capable of automatically connecting to multiple devices in a 30-foot radius and powering them up simultaneously over the air. The simplest way to explain it is to imagine a Wi-Fi router that delivers power to the gadgets in your home instead of internet access, except that it operates on the 5.8GHz frequency.

Ossia showed off a vision of a Cota Home transmitter in a typical house or office wirelessly delivering a steady stream of power to gadgets like smartphones, tablets, TV remotes, robot vacuum cleaners, thermostat controls, security cameras, and smoke alarms. This kind of setup could reduce the need for batteries in devices and make plugging in to recharge or having to wire in various home systems things of the past.

But before we get too carried away, it’s important to note that the power delivery is limited to a trickle charge, the efficiency is poor as a lot of energy is lost in transit, and the receiving devices require the correct hardware chip inside. Rather than being a product you can run out and buy right now, the Ossia Cota Home is part of Ossia’s reference design kit that’s intended to showcase the possibilities and tempt device manufacturers to license the technology.

The Ossia Cota Home is being demonstrated for us at CES 2020 today and we’ll update this post with our thoughts later, but we’ve seen demos from Ossia and others in this space before. Barriers like Federal Communications Commission approval and chip integration have been overcome in the last few years, but questions over the efficiency remain. Ossia plays up the advantages of its solution over batteries, with all the complications they present in terms of production and disposal, but the power its transmitters can deliver drops off rapidly with distance, and at 6 feet or more it’s delivering a tenth or less of what it sends out, which is not going be enough to charge a device like a smartphone, much less a robot vacuum. That may explain why Ossia’s partnership with phone case maker Spigen, announced at CES last year, has yet to bear fruit.

Where Ossia’s tech does potentially make sense is for security camera systems, smoke alarms, or other smart home gadgets that could prove expensive to wire in or wasteful if they use batteries. It could also work for IoT sensors and other gadgets with low power requirements, or perhaps to top up more demanding devices as a complementary technology. But the case for this kind of wireless power over distance as a replacement for the wall chargers, cables, and wireless charging pads we’re used to now is still dubious.