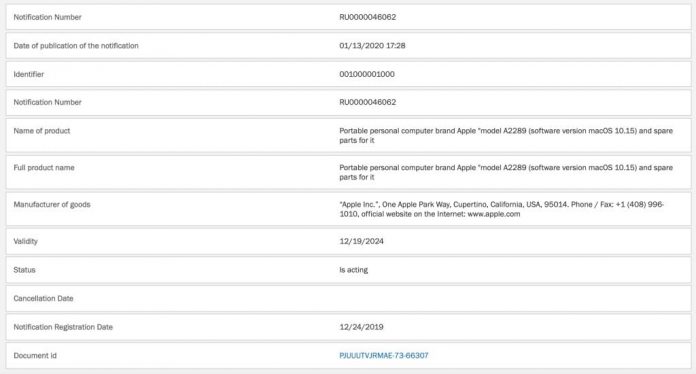 The newly released 16-inch MacBook Pro is the best Apple laptop released in years — but a successor may be already on the way. A new regulatory filing by Apple indicateS that a new MacBook Pro could be released soon, possibly in the next few months.

According to 9to5Mac, a new filing featuring what appears to be a new MacBook was spotted on the Eurasian Economic Commission’s database. A screenshot of the filing offered a few sparse details on the possibly upcoming MacBook Pro. The filing appears to have been submitted on December 24, 2019. This particular document refers to a “portable personal computer brand Apple” and says that it runs on MacOS 10.15, also known as MacOS Catalina, which is the latest version of Apple’s flagship Mac operating system. In addition, the new product is also given a model number of A2289.

That by itself, wouldn’t be enough to just assume that the new product will necessarily be a new MacBook Pro, but as 9to5Mac notes, it’s a good starting point because a successor to the recently released 16-inch MacBook Pro (and its updated Magic keyboard) “would make sense.” Not to mention a 13-inch MacBook Pro with a positively reviewed new, scissor-switch keyboard would be a welcome addition to Apple’s updated MacBook Pro line.

That new keyboard received a glowing review from Digital Trends. We reviewed the 16-inch MacBook Pro in December and especially loved the newly redesigned keyboard. Dubbed the “Magic Keyboard,” the new scissor-switch design was well-received and we especially liked its “larger keycaps and snappier mechanism” as well as the fact that it has a “full millimeter of travel.” Outside of the keyboard, we also liked the 16-inch MacBook Pro’s screen and speakers and we felt that it had “excellent performance for content creation.” There were only a few drawbacks including the fact that we still felt that the Touch Bar is “not useful” and that it lacks a bit in portability because of its size. But a 13-inch version of this MacBook Pro could fix that last drawback and bring portability back to an otherwise great laptop.

But as 9to5Mac notes, even though an EEC filing generally means a new product will be released soon, it’s likely that the release is still “a couple of months away.” And so we’ll just have to wait to see what Apple has in store for us.