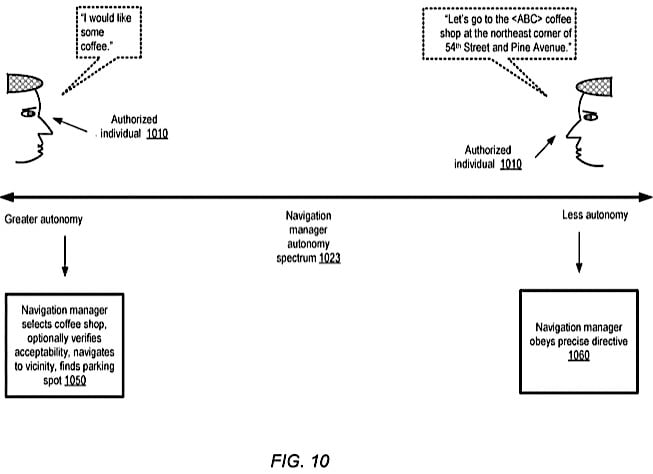 Apple wants to patent a new technology that would allow you to use voice commands to tell your self-driving car where you want to go, with the car doing the navigation, driving, and parking for you. The end result would be a Siri-like system for controlling your self-driving car.

The patent application, titled “Guidance of Autonomous Vehicles in Destination Vicinities Using Intent Signals,” was initially filed on August 2 of last year, and made public on Thursday, January 23. The technology described in the patent is meant to direct self-driving vehicles to a destination by using voice commands, gestures, or touchscreens.

The voice command technology is particularly impressive. You would be able to tell your car where you want to go and it would be able to take you there. The instructions don’t even have to be that specific — if you tell the car you want Indian food, it would find the nearest Indian restaurant, drive you there, and park.

The proposed Apple tech can even figure out the optimal place to park based on the product you’re looking to buy.

“For example, if the individual states, ‘I’d like to buy some plants for my garden,’ in the vicinity of a large retail store, the navigation manager [as the technology is described] may determine that the vehicle should preferably be parked near an entrance marked ‘gardening’ or ‘gardening supplies,’” the patent reads.

In another scenario, the patent describes a situation where you simply say, “I would like some coffee,” and the “navigation manager” would select a coffee shop based on proximity, coffee prices, or the individual’s history of coffee shops.

Aside from voice-control, the patent says the technology could also read gestures, gazes, or touch-based intent signals using sensor devices.

An example of the gesture-based technology is where the vehicle’s occupant could use their phone to point to a specific parking spot, which the car would read and then park in that exact spot.

Whether Apple plans on carrying out this self-driving technology itself in an Apple-designed car or merely selling the patent to someone else isn’t made clear in the patent’s documents. The tools could possibly be integrated into Apple’s CarPlay, which already has Siri integration and is built into many different vehicles, though they’d need advanced self-driving capabilities for it to work. We reached out to Apple for comment on this patent and will update this story when we hear back.

This isn’t Apple’s first self-driving patent. In November, Apple was granted a patent that is meant to eliminate a car’s blind spots within both human-controlled and autonomous driving modes.

Rumors have previously swirled around that Apple is interested in building a car. With more automotive patents, it looks like Apple could indeed be inching its way into the automotive market.