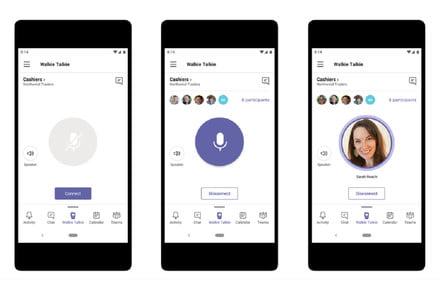 The Microsoft Teams communication and collaboration platform will soon add a push-to-talk feature that will allow smartphones and tablets to function as walkie talkies.

Microsoft revealed the upcoming Walkie Talkie feature in a blog post that details new ways that its products and services will empower firstline workers, or employees with service- or task-oriented roles.

According to the blog post, the push-to-talk feature will enable “clear, instant, and secure voice communication” that will turn company-owned smartphones and tablets into walkie talkies. Unlike calling features, which may be rejected, the walkie talkie function will quickly and easily broadcast a message to a person or a group of people.

Microsoft said that the walkie talkie feature will reduce the number of devices that firstline workers will need to carry, lower IT costs for their company, and prevent crosstalk or eavesdropping from outsiders compared to using analog devices.

Microsoft Teams’ walkie talkie feature will function over cellular data or Wi-Fi, which means that it may be used among workers in different geographic locations.

The push-to-talk feature will be launched on Microsoft Teams in private preview within the first half of the year. The walkie talkie icon will appear in the middle of the app’s bottom navigation bar once it is rolled out.

The walkie talkie feature will secure an advantage for Microsoft Teams over Slack, as its primary rival does not yet offer such a function. Digital Trends’ Slack vs. Microsoft Teams comparison reveals the advantages of each collaboration platform, with Slack being the more familiar and “comfortable” tool as an independent application and Microsoft Teams as a better fit for larger, more complex companies, especially those with Office 365 subscriptions.

Meanwhile, Apple introduced a similar feature for the Apple Watch, with similar benefits over analog devices, through watchOS 5. However, it might not be feasible for most companies to provide an Apple Watch to all of its firstline workers just for its walkie talkie capabilities, due to the cost of such a move.