Home News Like a bad ’90s revival, Compaq is back and making smart TVs
News

Like a bad ’90s revival, Compaq is back and making smart TVs 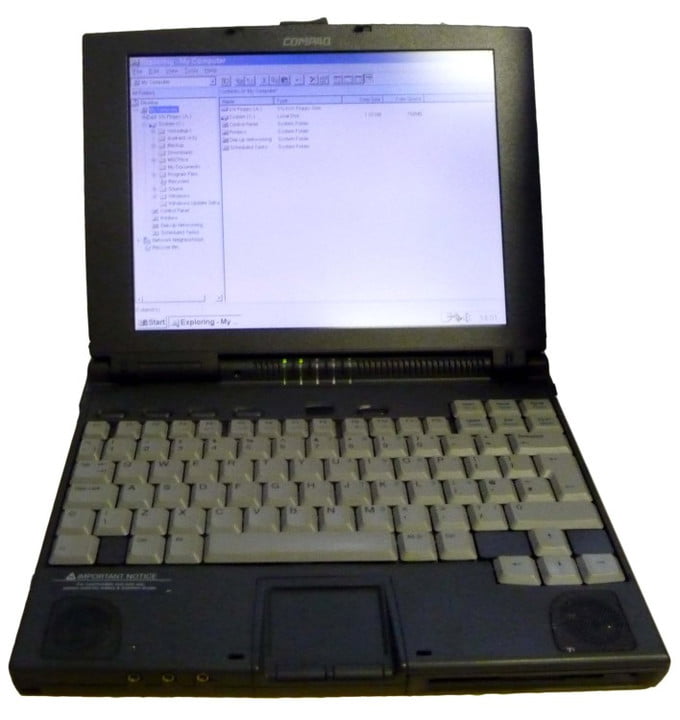 The days of Compaq and Gateway laptops are long gone. But if you have fond memories of buying your first Compaq laptop down at Circuit City, there’s good news. The brand is back — but in a different form.

As noted by Gadgets 360, Ossify Industries, an Indian electronics maker, will soon be reviving the Compaq brand name on its smart TVs. The first Compaq-branded products are expected to come later in 2020, but we don’t know much more about the products at the moment outside of its geographic focus on India.

This isn’t the first time Compaq has experienced a rebirth. In the mid-1990s, Compaq had set what was then the gold standard of computing, pushing out portable Windows 95 notebooks like the Compaq Armada 4160T and multimedia desktop PCs meant for the home and office like Compaq Presario 4122.

The company reached the height of its popularity and financial success in 1998, but started to struggle against cheaper competitors like Dell. In 2002, HP acquired Compaq for $24.2 billion and started selling laptops with the brand name. The merger was big news, but it turned out not to benefit HP all that much. By the mid 2000s, all Compaq products have been rebranded to HP, and most of the former Compaq employees had been laid off. The brand was officially killed off in 2013.

The Compaq Armada 4120 Via ComputingHistory.Org

No one’s heard a peep of the old PC brand since the 2000s. An Argentine company did license the brand for a couple of Presario notebooks for its local market in 2015. HP lives on as one of the few laptop makers to survive the era, with Compaq as a mere footnote in PC history.

The idea of a company playing on any goodwill consumers might still have for the brand has us nostalgic for the simpler days of electronics.

Will a focus on smart TVs bring the Compaq name back to its former glory? Will we see Gateway smartphones or IBM wireless earbuds next? Let’s hope not, but it’s always a fun exercise to see just how far laptops have come in the past fifteen years and which brands managed to win out in the long run.

Thunderbolt 3 has been a great protocol for the modern tech nerd. It utilizes USB-C cables to extend your PC capabilities to myriad peripherals, including monitors, network adapters, and even external graphics cards. Anker has a new entry in this space with the PowerExpand Elite 13-in-1 docking station.The company was nice enough to allow us three weeks with the PowerExpand Elite. We came away with several impressions. Most of them are for the positive and a few question marks. Let’s dive into the full review to expand on the expandability of the Anker PowerExpand Elite.DesignThis docking station is a tank. You will immediately notice the heft and solid metal construction of the casing. The PowerExpand isn’t large though. It’s around the size of a small novel making it easy to set up on your desk space.The dock can also be oriented both vertical and horizontal. Again, depending on your office, this adds additional flexibility on where to place the PowerExpand Elite.What’s in the Box?The included materials with things like docking station is always a mixed bag. Thankfully, Anker has included the essentials to get you started. Upon opening the box you will find the PowerExpand Elite 13, a two-part 180-watt power adapter, and a two-foot Thunderbolt 3 cable.The included accessories made setup a seamless experience. Take the PowerExpand Elite out the box. Plug in the power brick. Press the power button. Yes, there’s a dedicated power button which is nice. Now, you’re ready to put that Thunderbolt 3 cable to use with your laptop.All the PortsAs the name implies, the PowerExpand Elite has 13 available options of input and output. You have an array of slots on both the front and the rear of the PowerExpand Elite to accomplish this.The front houses the power button, micro and standard SD slots, a 3.5mm headphone jack, dual 10Gbps USB-C ports, and a 5Gbps USB-A port. This gives users quick access to most general input of data peripherals like USB pen drives, digital photo SD cards, and even your headphones without having to reach for the back of the dock.Now, around the back of the PowerExpand Elite is where all the heavy lifting is going to be done. The rear ports include two Thunderbolt 3 40Gbps ports (one for your laptop input and one for your output of choice), three USB-A ports, HDMI, and Gigabit Ethernet adapter.General UseUsing the PowerExpand Elite 13-in-1 is about as simple as it gets. Plug in your laptop, or Thunderbolt 3 PC, in one port and as many peripherals as the Elite can handle in the other 12. All the appropriate expansions worked as advertised in my usage.There was one caveat worth a mention. When using external monitors, you should make sure that your device is a certified Thunderbolt device. This gives you full capabilities to daisy-chaining up to three external monitors via the 40Gbps Thunderbolt out port.If using a USB-C device without Thunderbolt, you can only use display out with the HDMI port. All other expansion will work as intended, but you can’t use the other USB-C/Thunderbolt to push the external monitors. This is due to Thunderbolt 3 is backward compatible to USB-C standards, but the standard USB-C output doesn’t have the throughput to push the extra displays. Many laptop are USB-C only and do not support the Thunderbolt output.I’d suggest only using this dock with true, certified Thunderbolt laptops with this limitation. While you can get peripherals to work with no issue, the hindered monitor situation is worth noting. If not sure of your USB-C device, please check out the below picture. The Thunderbolt logo with the lightning bolt is your go-to indicator that you have a Thunderbolt certified port.Lastly, I’d loved to have seen at least one DisplayPort out option. Many other docks have both an HDMI and DisplayPort ports to offer both HD out monitor standards. This makes it more out-of-the-box compatible with numerous displays on the market.Final ThoughtsThe Anker PowerExpand Elite 13-in-1 is a phenomenal Thunderbolt 3 dock. It’s compact design and large expansion list make it a desirable option for any home office. The other setback for some might be the cost of $299, but this amount of peripheral diversity can’t be cheap.You can purchase the PowerExpand Elite on Anker’s website directly or on Amazon. At the time of this writing, Amazon has it $50 off. If you’re in the market for a versatile Thunderbolt dock, then this one from Anker needs to be on your list of options.
Read more