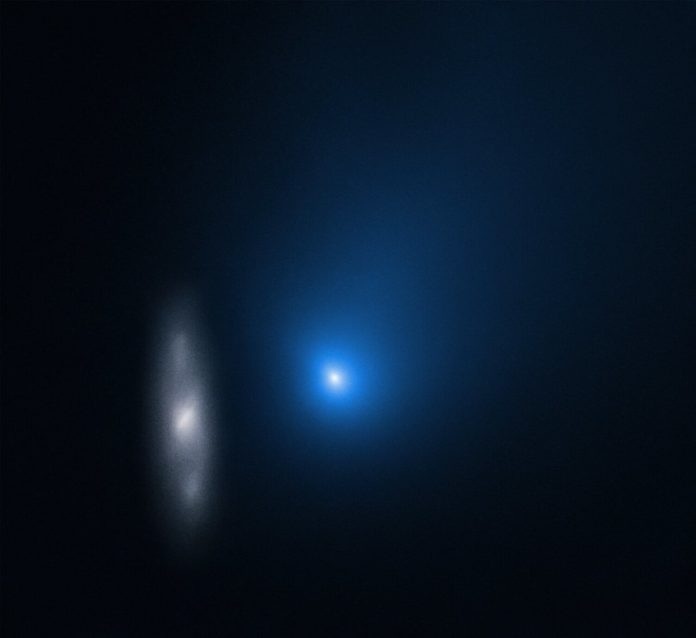 In September this year, astronomers spotted an interstellar visitor to our solar system: A comet moving through our system in an unusual orbit. This was the first object spotted visiting from outside our solar system since asteroid ’Oumuamua captured the public’s imagination in 2017. As this comet came closer, astronomers were able to image it several times and even learn about its chemical composition. It was named 2I/Borisov after the Ukrainian astronomer Gennady Borisov who discovered it.

Astronomers were keen to learn more about Borisov, so they imaged it with the Hubble Space Telescope to create a clearer image that showed its ice core surrounded by a halo of dust. Now, Hubble has captured an image of the comet once again as it zips past the sun.

Comet 2I/Borisov is only the second interstellar object known to have passed through our Solar System. In this image taken by the NASA/ESA Hubble Space Telescope, the comet appears in front of a distant background spiral galaxy. The galaxy’s bright central core is smeared in the image because Hubble was tracking the comet. Borisov was approximately 326 million kilometers from Earth in this exposure. Its tail of ejected dust streaks off to the upper right. NASA, ESA, and D. Jewitt (UCLA)

In this latest image, taken as the comet zips by at a speed of over 175,000 kilometers per hour (109,000 miles per hour), Borisov is heading back out into interstellar space. You can see its tail of dust which is thrown off as the comet travels.

“Hubble gives us the best measure of the size of comet Borisov’s nucleus, which is the really important part of the comet,” David Jewitt, a professor of planetary science and astronomy at the University of California Los Angeles, explained in a statement.

“Surprisingly, our Hubble images show that its nucleus is more than 15 times smaller than earlier investigations suggested it might be. The radius is smaller than half a kilometer. This is important because knowing the size helps us to determine the total number, and mass, of such objects in the solar system, and in the Milky Way. Borisov is the first known interstellar comet, and we would like to know how many others there are.”