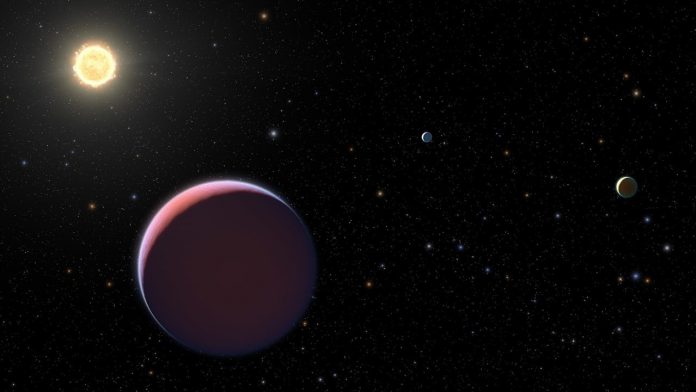 This illustration depicts the sun-like star Kepler 51, and three giant planets that NASA’s Kepler space telescope discovered between 2012-2014. These planets are all roughly the size of Jupiter but a tiny fraction of its mass. This means the planets have an extraordinarily low density, more like that of Styrofoam rather than rock or water, as investigated by the Hubble Space Telescope. NASA , ESA , and L. Hustak, J. Olmsted, D. Player and F. Summers

Our solar system contains three types of planet: Rocky terrestrial planets like Earth and Mars, gas giants like Jupiter and Saturn, and ice giants like Uranus and Neptune. In our exploration of other solar systems, we’ve also found types including lava planets, gas dwarfs, and protoplanets. But observations from the Hubble Space Telescope have uncovered a new and most unusual class of planet: A “super-puff” with the density of cotton candy.

Three planets orbiting the star Kepler 51 were discovered in 2012, and the fact that they had notably low density was uncovered in 2014. Now, data from Hubble has allowed scientists to confirm that their masses are several times that of Earth, but they are so big and bloated that they are nearly as big as Jupiter. In other words, despite being a similar size to Jupiter, they are around one hundred times lighter.

The planets are puffed up in this way due to the expansion of their atmospheres, which consist of hydrogen and helium. But scientists don’t yet know what caused the atmospheres to behave in this manner.

One theory is that the puffiness of the planets is related to the young age of the system, which is only 500 million years old. For comparison, our sun in 4.6 billion years old. The planets may have formed at a distance from their star and migrated inward over time. As the planets move closer to the star, they will eventually lose the atmospheres which make them so large. Scientists estimate that the planet closet to Kepler 51 will eventually, in a billion years, become a type of planet called a hot Neptune.

So it could be that the unusual puffiness is a stage of planetary evolution that we haven’t seen much of before. However, Hubble scientists predict that the most distant planet, Kepler-51 d, “will continue to be a low-density oddball planet.”

To learn more about the super-puffs, the researchers hope to use the upcoming James Webb Telescope to get a closer look at the planets’ atmospheres.

Facebook
Twitter
Pinterest
WhatsApp
Previous articleNASA wants to bring supersonic flights back with the super quiet X-59 craft
Next articleThink your house is smart now? Here’s a peek at what it’ll be like with AR