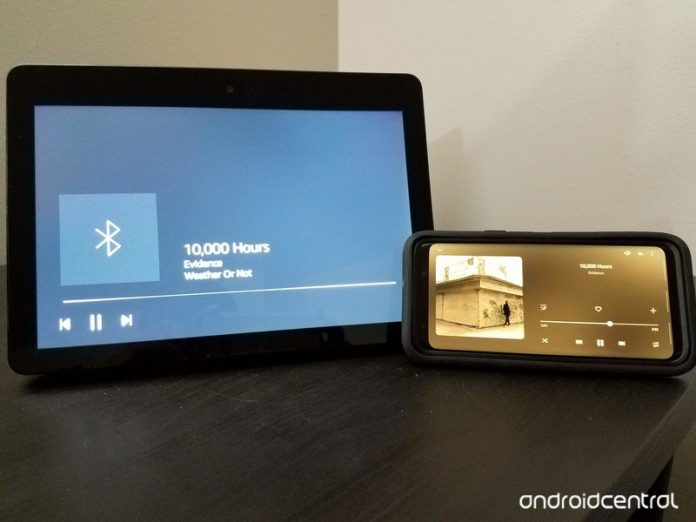 Your Amazon Echo isn’t just an effective smart assistant capable of managing your smart home. The Echo devices are also capable Bluetooth speakers for those of us that store their music on their Android smartphones. Don’t know how to set this up? Let us show you how to take advantage of this awesome feature on your Amazon Echo device.

I used a Samsung Galaxy S9 running Android 9 (Pie) with Samsung One UI for this guide. Depending on the operating system, user interface, and device model you’re using, things may look a little different. That being said, the setup should be similar across the board.

In the settings menu, tap Connections.

Tap Bluetooth.
Say Alexa (or your set wake word), pair.
Find and select your Echo device in the list of Available devices. It will be formatted as Echo-XXX or Echo (Dot/Plus/Show/Spot)-XXX.

Now your Echo Show and your Android smartphone will be connected to each other via Bluetooth.

After setting up your Bluetooth connection on your Amazon Echo, you can play your locally stored music and other audio files on your Echo device the same as a regular Bluetooth speaker.

For this walkthrough, I used a Moto Z3 device, but the process should be the same on Android regardless of the phone you use.

Open the Amazon Alexa app and tap the Play button on the bottom of the screen.
Choose a recently played playlist or album.

Tap on which device you want to stream the audio to. 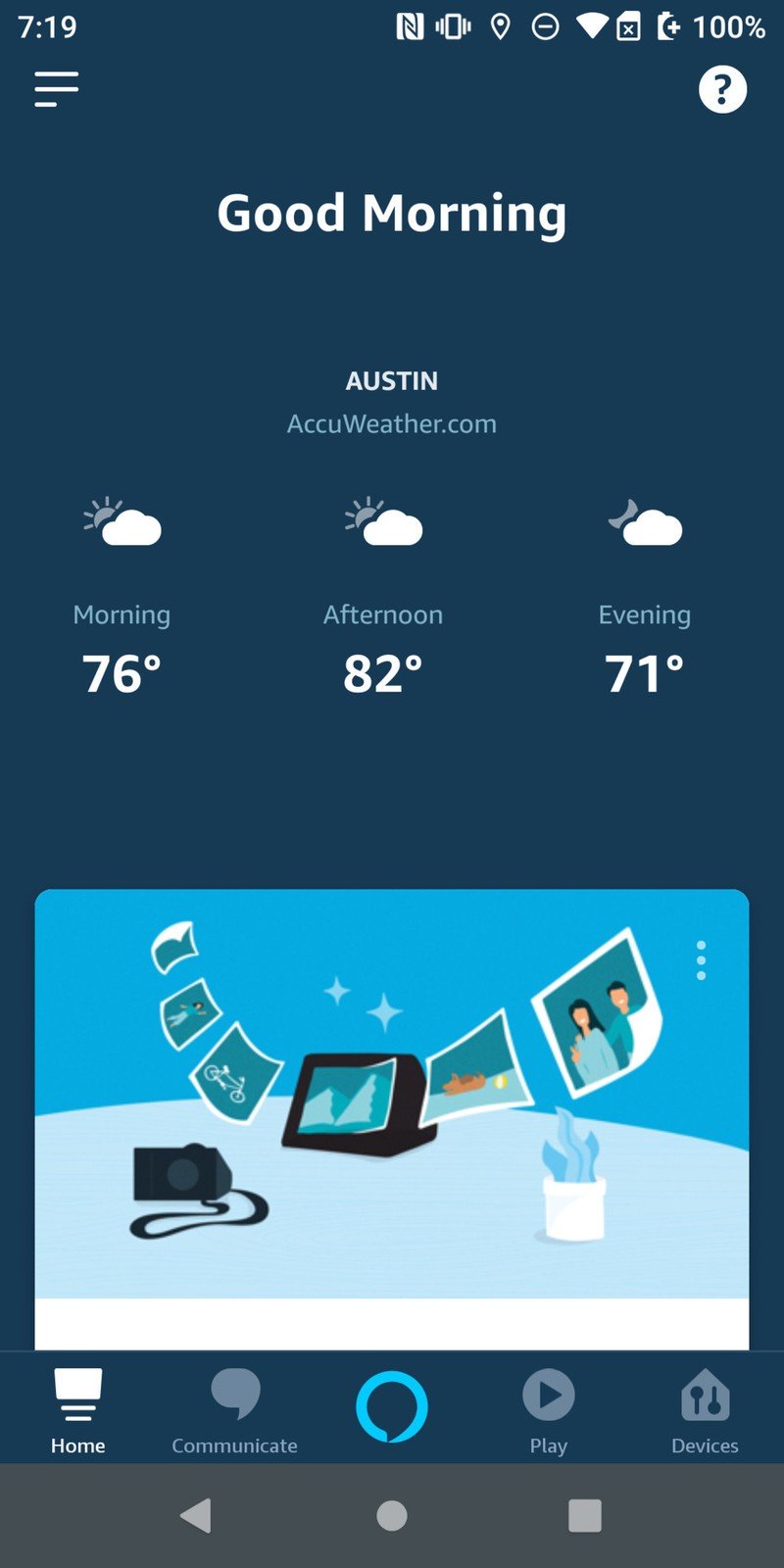 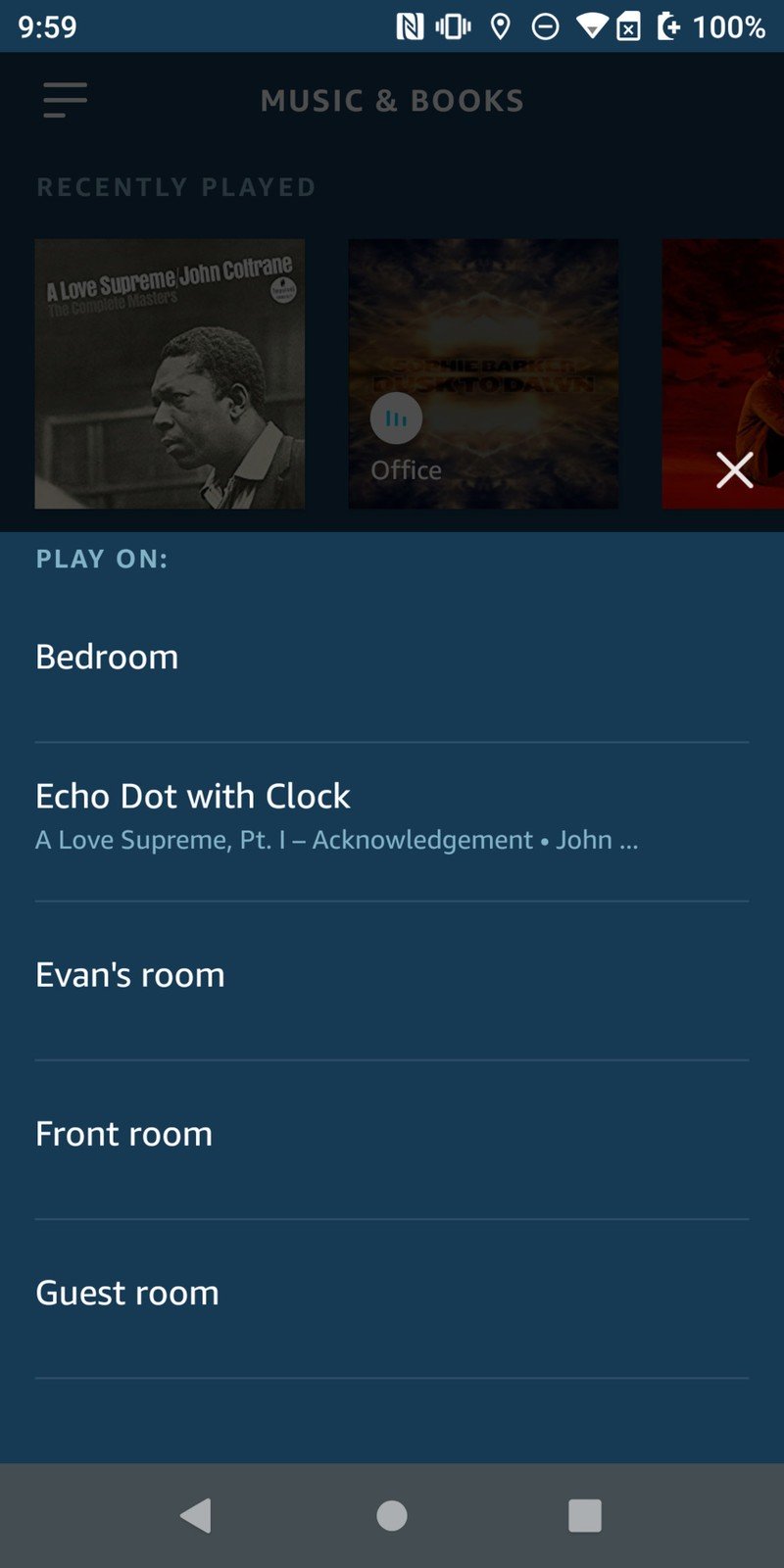 At any point, you can change which device the music is streaming to by clicking on the arrow at the bottom center of the app (where it says Echo Dot with Clock in this screenshot). 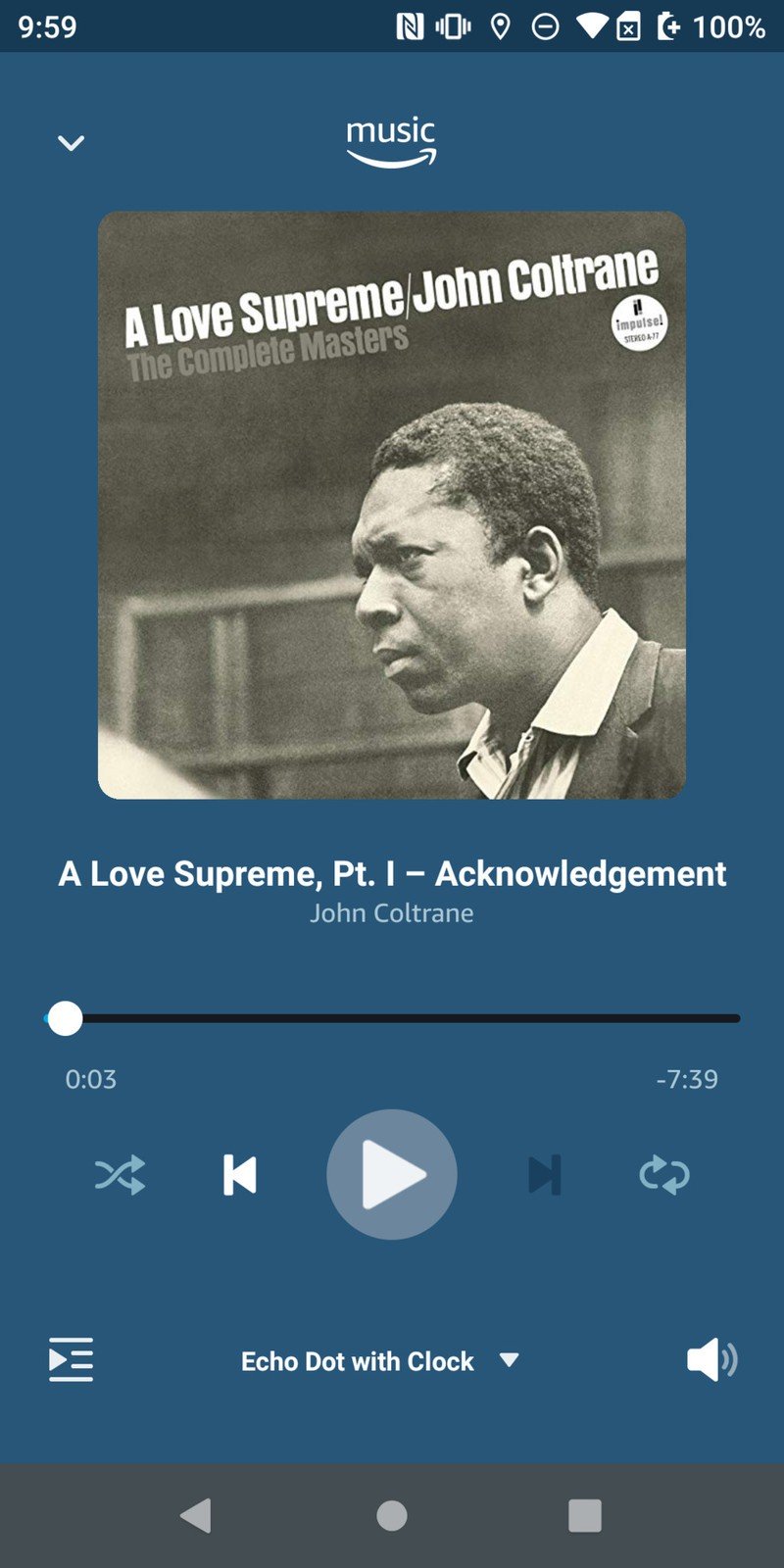 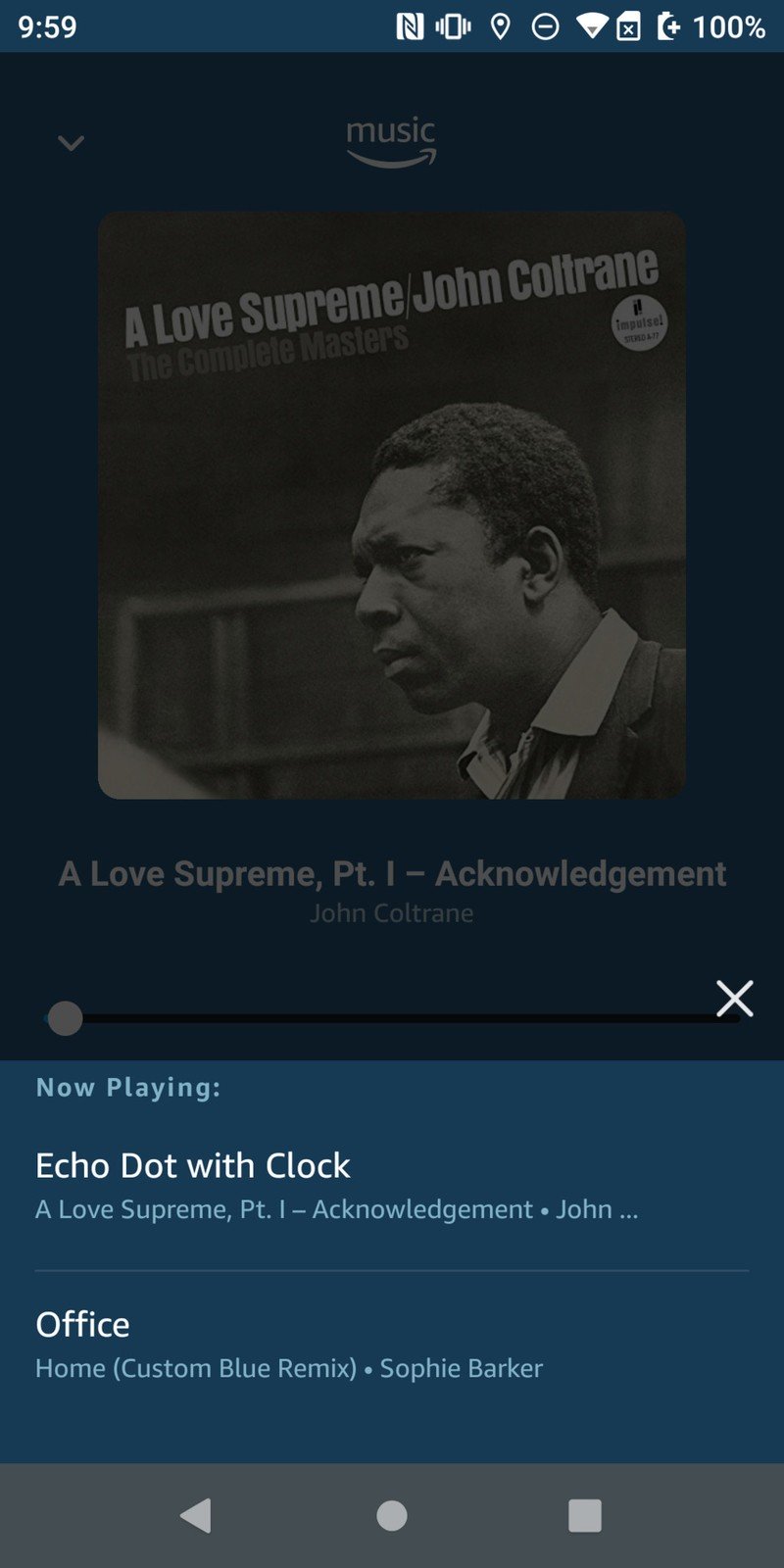 Now you can stream music from your Alexa app on your Android phone to your Echo device.

For this walkthrough, I used a Moto Z3 device, but the process should be the same on Android regardless of the phone you use.

Open the Amazon Music app and tap on an album, playlist, or song that you want to hear.
Tap on the streaming/casting icon at the bottom middle of the screen (the three curved lines and box).
Tap on which device you want to stream the audio to.
At any point, you can change which device the music is streaming to by clicking on the streaming/casting icon bottom center of the app. 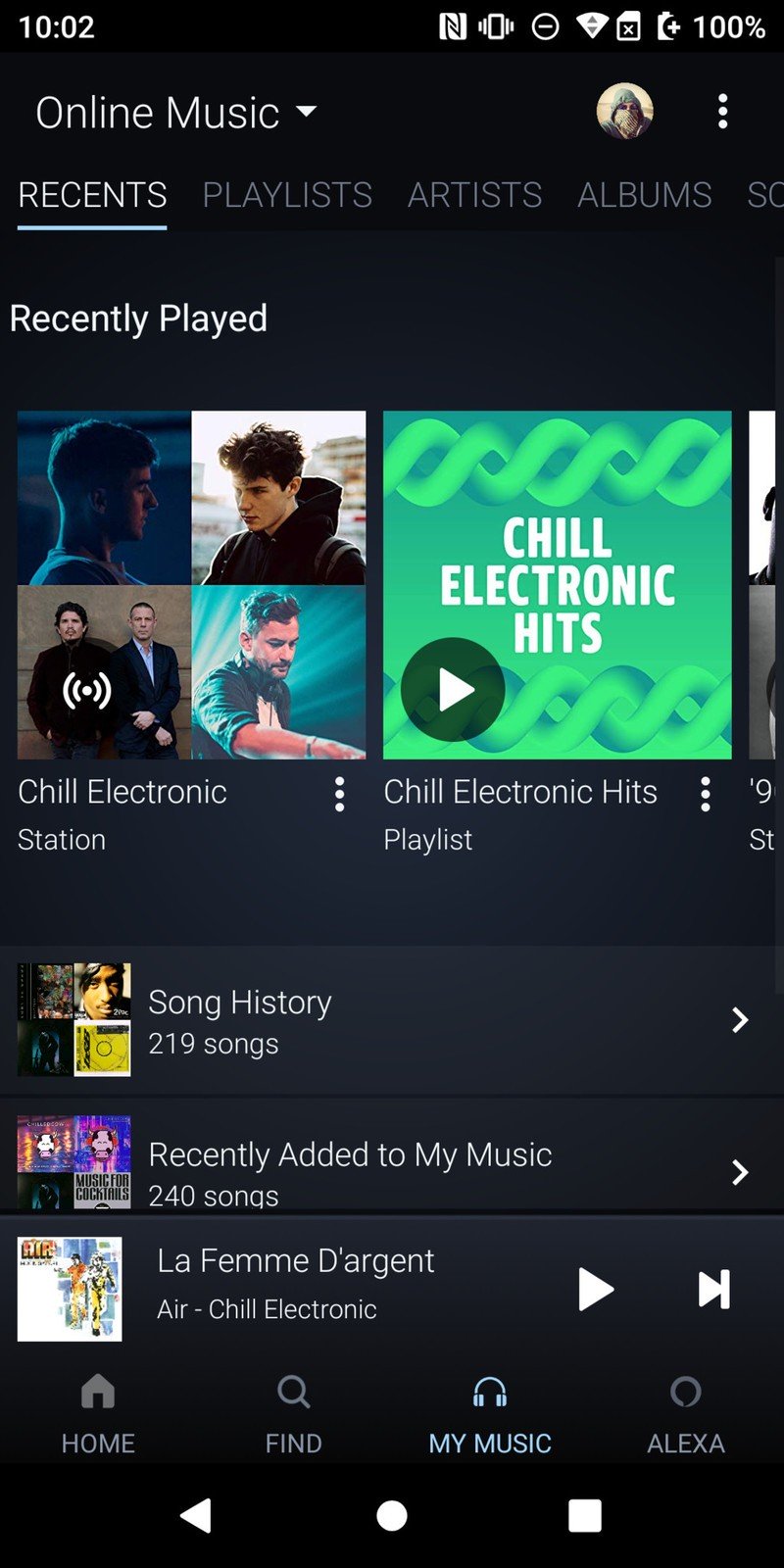 Now you can stream music from your Amazon Music app on your Android phone to your Echo device.

Here are some additional items that you can use to maximize the usage of your Android smartphone being connected to your Echo speaker. Even though the Samsung Galaxy S9 and S10 have a lot of onboard storage, having extra space isn’t a bad thing. The SanDisk Extreme line supports read speeds of up to 160MB/s for fast file transfers of high-res photos and 4K UHD videos, as well as up to 90MB/s write speeds for shooting UHD video on your device. It’s also good for locally hosting your music files if you’re not one to stream music. When playing music on your phone, it can drain the battery quite a bit. The Anker 10W Wireless Charging Stand supports 10W Fast Charging on Samsung devices with a separately supplied Fast Charging AC adapter and can keep your phone topped up during those long listening sessions.

Amazon Music Unlimited (From $8 per month at Amazon)

Amazon Music Unlimited offers over 40 million songs, special exclusives, and tailored playlists and stations. It’s already affordable, but Amazon Prime members can even get some money off.