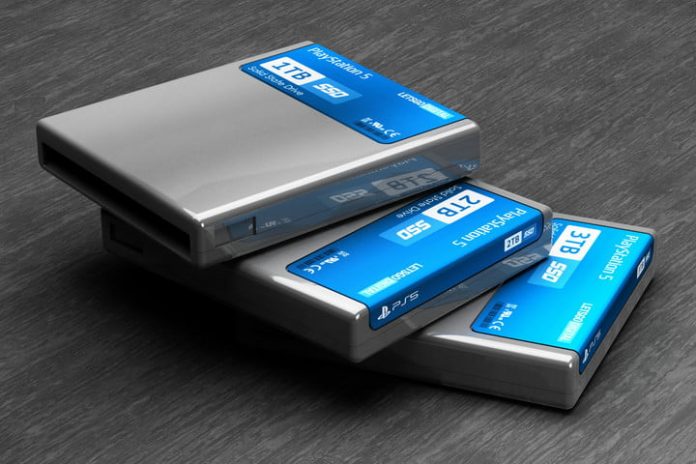 Sony filed a patent in June describing what appeared to be a game cartridge design for an unannounced PlayStation-branded handheld device. Now, there’s speculation that this patent describes a custom external SSD for the upcoming PlayStation 5 console.

Discovered by LetsGoDigital, the patent lists the design as a Class 14.99 device, which translates to “Electronic game accessories” in Japan, which led to speculation of a possible handheld gaming device given that the PlayStation Vita relied on small cartridges. The older PlayStation Portable used the failed Universal Media Disc cartridges.

Despite its lackluster seven-year run, the PlayStation Vita served as a good companion for the PlayStation 4. Owners could stream PS4 games straight to the device anywhere in the house. But it lacked the innovation of the Nintendo 3DS and Switch. It also fell prey to the rise of mobile gaming.

The published patent suggest that Sony may attempt a companion handheld console again and release it alongside – if not soon after – the PlayStation 5 arrives during the 2020 holiday season. But that may not be the case at all.

Sony will reportedly ship the PlayStation 5 with an internal SSD. That just makes sense given how hard drives are slower and require games to include multiple assets, making the game installs painfully large. But given SSDs cost more than hard drives, Sony may install SSDs with lower capacities to keep the overall console price tag low.

That’s where the external SSDs come into play. Similar to its approach with SD cards, Sony may sell proprietary SSDs designed specifically for the PlayStation 5 so gamers can increase the overall storage. That could mean PlayStation 5 owners can’t purchase and install SSDs manufactured by third parties, like SanDisk, WD, and so on.

Sony is expected to reveal the PlayStation 5 during an event in February 2020, followed by a huge showcase at E3 2020 four months later. After that, the console may arrive just before Christmas at the end of 2020. It will reportedly rely on an AMD “Navi” chip supporting 8K Ultra HD and ray tracing. It may also include a 4k Blu-ray player supporting 100GB optical discs.