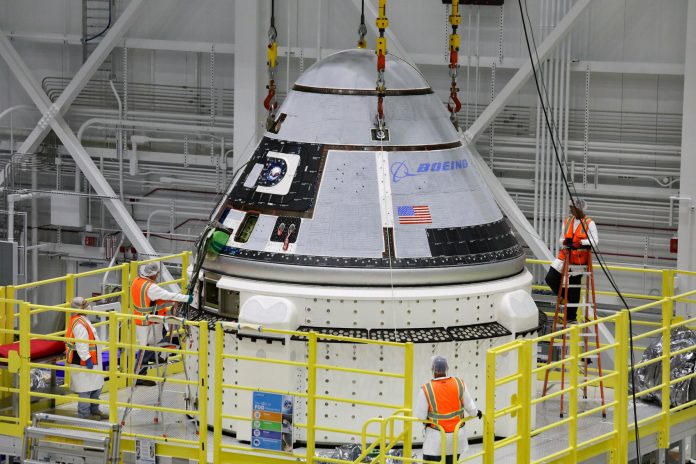 The crew module of Boeing’s CST-100 Starliner spacecraft is lifted onto its service module on Oct. 16 inside the Commercial Crew and Cargo Processing Facility (C3PF) at Kennedy Space Center in Florida. Boeing

Boeing has identified the part which lead to a parachute failing to deploy during the testing of its Starliner capsule earlier this week. The company has announced that a misplaced pin was the cause of the issue.

On Tuesday, Boeing performed an important launch abort test of its capsule, which is intended to eventually ferry astronauts to the International Space Station (ISS). For a manned craft, the launch abort test is vitally important. It is where the engineers test what would happen if something goes wrong during the launch and the passengers are forced to evacuate.

Although the test was mainly a success, with the capsule being pushed away from the rocket as it should be and landing a mile away from the launch site, there was a snag. Only two of the three parachutes which slow the descent of the capsule opened, with the third failing to deploy.

Following an investigation, Boeing announced it had discovered the cause of the parachute failing to open. As reported by Space Flight Now, John Mulholland, vice president and program manager for commercial crew at Boeing, announced the findings in a call with reporters.

“The root cause was a lack of secure connection between the pilot chute and the main chute lanyard,” Mulholland said. There is a pilot parachute which fires first and inflates to pull the main parachute out behind it. But in this case, the pilot parachute wasn’t connected securely enough to the main parachute to successfully deploy it. The connection between the two parachutes is a loop with a pin inserted inside, both of which are enclosed in a sheath. But the sheath makes it difficult to see if the pin is secured correctly.

“In this particular case, that pin wasn’t through the loop, but it wasn’t discovered in initial visual inspection because of that protective sheath,” Mulholland said. “It was subsequently … determined by both detailed close-out photos and then, obviously, when we recovered the hardware in the field, [when we] were able to conclusively tie those two pieces together.”

Now that Boeing has discovered the issue, it is confident it can be fixed. In addition, the test showed that even with only two of the three parachutes deployed, the capsule could still land safely. So despite the hiccups, it’s overall good news for the Starliner and there shouldn’t be any delays to the planned Orbital Flight Test of the capsule in December.