Here’s your first look at the upcoming Samsung Galaxy A51

The Galaxy A50s successor will have an Infinity-O display. 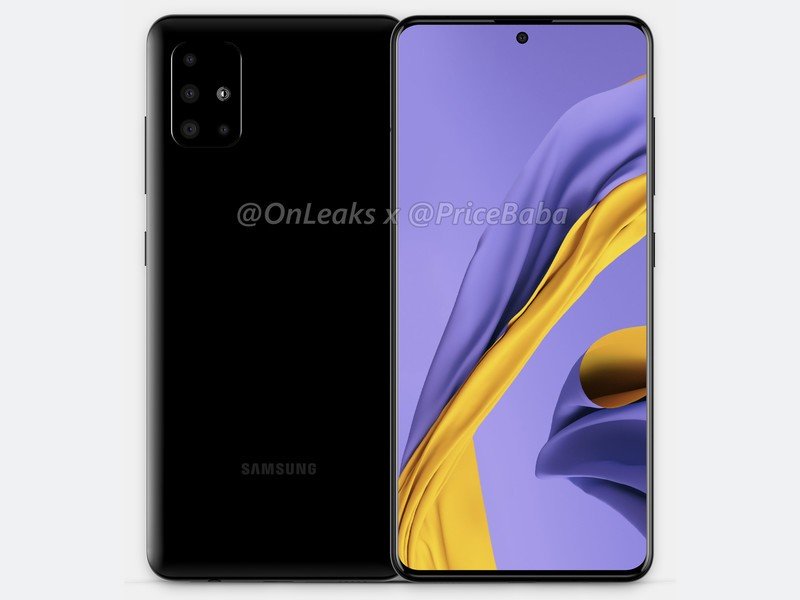 Samsung is now working on its next-gen Galaxy A-series lineup, which is expected to debut sometime early next year. CAD-based renders of the Galaxy A50s successor have now appeared online, revealing some major design changes.

The renders, which have been shared by reliable leaker @OnLeaks in collaboration with Pricebaba, give us a clear look at the upcoming Galaxy A51 from all angles. Unlike the Galaxy A50 and A50s, which come with a U-shaped notch at the top, the Galaxy A51 will have a centered hole-punch cutout.

According to @OnLeaks, the phone will have a 6.5-inch display. Thanks to the much smaller chin at the bottom, however, the phone will actually be slightly more compact than its predecessor in terms of physical size.

At the back, we can see that the phone will have four cameras in an L-shaped array. Unsurprisingly, there is no fingerprint sensor on the back, as the Galaxy A51 will come with an in-display sensor like its predecessors. At the bottom, we can see a USB Type-C port, the loudspeaker grill, and a 3.5mm headphone jack.

Samsung’s Galaxy A51 is rumored to be powered by an Exynos 9611 chipset, coupled with up to 6GB of RAM and 128GB of expandable storage. The quad camera setup on the back could have a 48MP primary sensor, 12MP wide-angle lens, 12MP telephoto lens with 2x optical zoom, and a 5MP depth sensor. It is also expected to feature a 32MP selfie camera and a 4,000mAh battery.

The Galaxy A50 is a solid mid-range Android smartphone that offers an attractive design and is packed with features. It has a large 6.4-inch Super AMOLED display with an edge-to-edge design, a triple camera setup with a versatile ultra-wide lens, 25MP selfie camera, and a 4,000mAh cell that comes with fast charging support.

It's all about making meetings more natural and listening to the feedback of scientists and educators.
Read more
News

This build is all about Platform Stability.Just under a month after Google dropped the first Android 11 Beta, the second
Read more
News

Check out Microsoft's unique customizations to Android on the Surface Duo.Microsoft's Surface Duo is coming soon, and the company has
Read more

Truly wireless headphones are pretty commonplace in 2020 as they come in all shapes, sizes, and unique designs. I’ve taken a look at many of the AirPods-styles units, but Soundcore (Anker’s audio brand) was kind enough to let me test out the company’s latest sport earbuds, the Soundcore Spirit X2.Let’s take a look at them.DesignThe Spirit X2 is a new form factor of wireless audio for me. The buds fit in your ear much like the older neckband style buds but are supported by a plastic loop that then spins around your ear. This makes them bulkier than other wireless earbuds, but thankfully, doesn’t lead to any decrease in comfort.It does lead to a learning curve on putting them on. After a few tries, you kind of get the hang of it. Soundcore even has a tutorial both in the manual and on its website, but it’s not the easiest fit to immediately handle.Each earpiece has a button rocker. The right allows for volume up at the top and play/pause on the bottom. Much in reverse, the left side controls volume down and play/pause. Hold the right volume button for one second and you’ll skip forward a track, and conversely, the left side sends you to the previous playlist selection.And you can’t have audio controls these days without consideration for voice assistants. Well, Soundcore has you covered on the Spirit X2. A long press of one second on the play/pause button of either earbud will activate Siri, Google Assistant, or even Bixby (if you’re that person I want to hear it in the comments).The exception of this long-press is phone calls. An incoming call will be rejected on the extended press of play/pause. And while on a call it has a neat little trick of swapping the call from the Spirit X2 output back to your phone speakers. One press of the play/pause will also answer and end phone conversations.AudioThe playback audio of the Spirit X2 is pretty solid. There’s a good mix of highs and mids. Bass is punchy but not overpowering. I like balanced earbuds on audio levels. I hate having one that sounds great on music listening but makes podcasts sound like they were recorded in a barrel.Qualcomm’s aptX audio codec is present and creates much of this superior balance. You don’t have active noise cancellation on music. This only presents passive cancellation through the earbud fit and design. You do get cVc active cancellation while on phone calls.These headphones are never going to make a true audiophile happy, but if you want them for casual listening you’ll be fine. Cubicle tunes or workout jams can easily be managed. Also, the looped design makes them great, and functional, for running.Battery LifeThis is another home run by Soundcore. That giant earloop also houses a much larger battery than most wireless earbuds. The Spirit X2 is estimated to last 9 hours on 50% volume and it’s dead on the money.I’ve consistently gotten a full workday in my home office with the Spirit X2 pumping out music and podcasts. Pair the great onboard battery with the charging case and you will get a maximum of 36 hours of total playback.The said case has a great design and magnetic charging system. When you do deplete the battery banks, you can recharge via USB-C. At the $80 price point, I’d love to also see wireless charging, but sadly, it’s missing.Final ThoughtsMy favorite earbuds by far in 2020 are the Soundcore Liberty 2 Pro. With a balance of comfort, great audio, and all-day battery life it’s hard to beat. However, the Spirit X2 is now in the running. They fall short on wireless charging and slightly weaker audio playback.Despite this, they beat the Liberty 2 Pro in battery life and offer a unique fit for more active consumers. If you are a runner or workout gym-rat, then the Spirit X2 could definitely be the wireless audio solution you’ve been searching for online.I’d also argue it’s a great value over offerings from big-box brands like Apple and Beats. The Souncore Spirit X2 is available in black with a price tag of $80. You can snag these earbuds from Soundcore’s website directly or its Amazon storefront.
Read more

It's all about making meetings more natural and listening to the feedback of scientists and educators.
Read more

This build is all about Platform Stability.Just under a month after Google dropped the first Android 11 Beta, the second
Read more