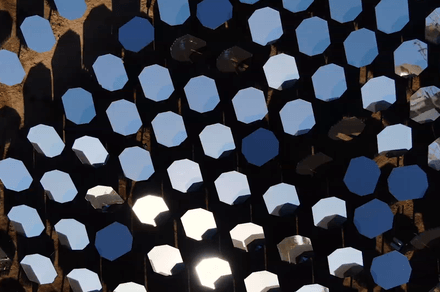 A startup backed by Bill Gates has found a way to combine artificial intelligence and solar energy to create extreme heat, essentially replacing the need for fossil fuels.

The clean-energy company, called Heliogen, has used A.I.-powered mirrors that can generate extreme heat — more than 1,800 degrees Fahrenheit — for the first time commercially, according to a press release. This concentrated solar energy is so hot that it has the potential to replace fossil fuels that are used to make cement, steel, and glass.

“We are rolling out technology that can beat the price of fossil fuels and also not make the CO2 emissions,” said Bill Gross, Heliogen’s founder and CEO, to CNN Business. “And that’s really the holy grail.”

The company is taking the concept of solar energy — specifically concentrated solar energy y— and reflective mirrors to essentially create a massive magnifying glass that would create enough heat to replace the use of fossil fuels by industries that are known to produce harmful CO2 emissions.

According to the press release, cement alone makes up more than 7% of the world’s CO2 emissions. Heliogen said that its technology could be a major step toward solving climate change.

Because of these promising uses, Heliogen’s processes attracted Gates to get involved as a backer.

“[Emissions] are everywhere in our lives, but we don’t have any proven breakthroughs that will give us affordable, zero-carbon versions of them. If we’re going to get to zero-carbon emissions overall, we have a lot of inventing to do,” Gates said in the press release. “I’m pleased to have been an early backer of Bill Gross’s novel solar concentration technology. Its capacity to achieve the high temperatures required for these processes is a promising development in the quest to one day replace fossil fuel.”

Other investors in the technology include Swaroop “Kittu” Kolluri from Neotribe Ventures, Patrick Soon-Shiong from NantWorks, and Steve Case from Revolution’s Rise of the Rest Fund.

A spokesperson from Heliogen told Digital Trends that the technology is commercially available now, and the first commercial deployments are expected in 2020.

If you're an aspiring or even seasoned developer, choosing which programming language or platform to learn next can be a
Read more
News

Streaming services are always offering free trials, but it's not often that we see deals on annual memberships. Hulu's latest
Read more
News

If you're an aspiring or even seasoned developer, choosing which programming language or platform to learn next can be a
Read more

Streaming services are always offering free trials, but it's not often that we see deals on annual memberships. Hulu's latest
Read more

After months of anticipation, Samsung's latest Unpacked event provided us with the brand-new Galaxy Note 20 lineup, along with other
Read more