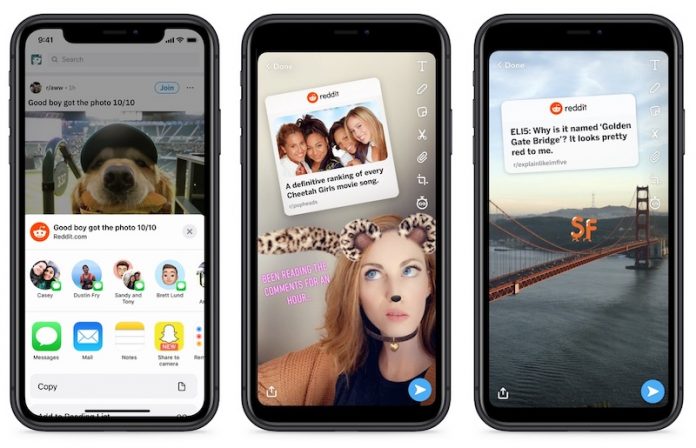 Users of Reddit’s official iOS app can now share text, link and image-based posts to Snapchat thanks to a new Share Sheet integration in iOS 13 (via TechCrunch). This is the first time Reddit has partnered with another app to allow for content sharing, and the company said it will expand the feature to other social media apps in the future.

Any Reddit user who has Snapchat on their iPhone can tap the “Share” icon on a post in the Reddit app to find the new Snapchat “Share to camera” option. From there, users can choose to send the post to friends or post to their story, and it will appear in Snapchat as a sticker with the Reddit logo, an image, and the title of the link.

“Snapchat is the first platform partner with whom we’re testing a content sharing integration, and we’re excited to see how the feature will shape the sharing habits and experiences among our users,” said Vaibhav Sahgal, Reddit’s Head of Growth Product, in a statement. “We hope the integration empowers redditors to share Reddit content more frequently, while simultaneously exposing new users to the unique content only found on Reddit.”

Reddit is hoping the new integration will lead to more engagement with younger users on its platform. The company is looking to balance out its age demographics, which skew toward older users aged 30 to 49, according to a study from Pew Research Center.

The new feature is only available for Reddit’s “Safe for Work” subreddits, as any other subreddit violates Snapchat’s terms of use. For now, the update is also only on iOS, but Android devices will get it sometime soon.