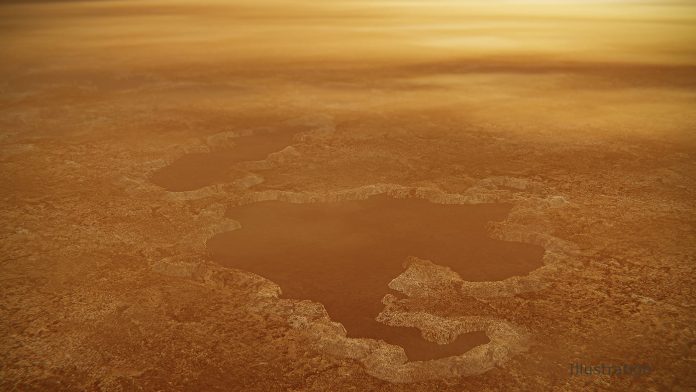 This artist’s concept of a lake at the north pole of Saturn’s moon Titan illustrates raised rims and rampart-like features such as those seen by NASA’s Cassini spacecraft around the moon’s Winnipeg Lacus. NASA/JPL-Caltech

Other than Earth, there’s only one body in our solar system which has liquid on its surface — Titan, one of the moons of Saturn. But the liquid on Titan isn’t water, it is methane and ethane. As Titan is so cold, the methane and ethane which would gases on Earth are chilled to a liquid state there and they rain down on the moon in a pattern similar to our water cycle.

Due to this rainfall, Titan has methane lakes on its surface. But there is something odd about these lakes. Scientists have noticed that some of the lakes have steep rims which can be hundreds of feet high. Now, using data from the Cassini probe, they think they know why — the rims are caused by explosions of nitrogen from deep underground.

Previously it was believed that lakes on Titan formed in a similar way to a type of lake on Earth called a karstic lake. This is where liquid lands on the surface and gradually dissolves it, eating into the bedrock and forming a trough. But now astronomers have found that some of Titan’s lakes formed in a different way. As the crust of the moon warmed, pockets of liquid nitrogen below the surface heated until they turned into gas and exploded outward, forming craters in the surface. This explains the high ridges of some lakes.

“The rim goes up, and the karst process works in the opposite way,” Giuseppe Mitri of Italy’s G. d’Annunzio University, leader of the research team, said in a statement. “We were not finding any explanation that fit with a karstic lake basin. In reality, the morphology was more consistent with an explosion crater, where the rim is formed by the ejected material from the crater interior. It’s totally a different process.”

The findings give clues to how the moon’s atmosphere has developed over time. “These lakes with steep edges, ramparts and raised rims would be a signpost of periods in Titan’s history when there was liquid nitrogen on the surface and in the crust,” Mitri noted.

Even though the Cassini mission ended in 2017, data from the probe is still being used to make new scientific discoveries. “This is a completely different explanation for the steep rims around those small lakes, which has been a tremendous puzzle,” Cassini Project Scientist Linda Spilker said in the same statement. “As scientists continue to mine the treasure trove of Cassini data, we’ll keep putting more and more pieces of the puzzle together. Over the next decades, we will come to understand the Saturn system better and better.”