Home News This nail gun drone is either the future of construction or the...
News 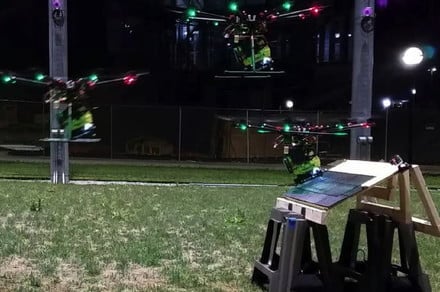 Is a drone equipped with a real firing nail gun an awesome idea or the epitome of why humanity can’t have nice things? Whatever conclusion you come to (and it will probably say a whole lot about you as a person), there’s no doubting one thing: That qualified scientists thought it was a good enough concept to actually build.

At the University of Michigan, a team of roboticists recently created just such a beast — and while, right now, it’s limited to a flight time of just 10 minutes and a couple dozen nails, that’s still enough to do a whole lot of potential damage. Or, according to its creators, some helpful roofing.

In a paper that actually exists, titled “Nailed It: Autonomous Roofing with a Nailgun-Equipped Octocopter,” the team of four researchers describe their dream of “autonomous roofing” using a multicopter. “A DJI S1000 octocopter equipped with an off-the-shelf nail gun and an adjustable- slope roof mock-up were used,” they note in the paper’s abstract. “The nail gun was modified to allow triggering from the vehicle and tooltip compression feedback. A mount was designed to adjust the angle to match representative roof slopes. An open-source octocopter autopilot facilitated controller adaptation for the roofing application. A state machine managed autonomous nailing sequences using smooth trajectories designed to apply prescribed contact forces for reliable nail deployment.”

It sounds so sensible when it’s phrased like that! Experimental results of the autonomous nail gun-firing aerial vehicle showcased its ability to hit a target “within a required three centimeter gap on the shingle.” At the conclusion of the paper, the team describe their plans for future work that includes a pneumatic air gun, power tether for long running time, and vision/depth-based localization system.

This isn’t the first time that someone has decided to attach a potentially dangerous object to a drone. Earlier this summer, Digital Trends wrote about the TF-19 WASP Flamethrower Drone, a fiery attachment for commercial drones that makes it possible to “ignite aerial and ground targets from miles away.” Meanwhile, Duke Robotics’ TIKAD drone can be equipped with a plethora of intimidating firearms, including semi automatic weapons and a 40mm grenade launcher. Not to mention the military drones used in conflicts around the world.

And, just like that, suddenly the idea of a drone that fires nails seems a little bit quaint and harmless by comparison.

Facebook
Twitter
Pinterest
WhatsApp
Previous articlePSA: Verizon is down for a lot of people in the U.S. right now
Next articleiOS 13.1 will bring processor throttling to the iPhone XS and iPhone XR

A galaxy far, far away is coming to your living room again very soon.The recent Star Wars resurgence (thanks to
Read more

Technology has come a long way since flip phones. These days, devices like the Samsung Galaxy Z Fold 2 and
Read more

What you need to know about AT&T 5G

AT&T has one of the most developed 5G networks out right now with millimeter-wave coverage alongside low-band coverage. Both networks
Read more