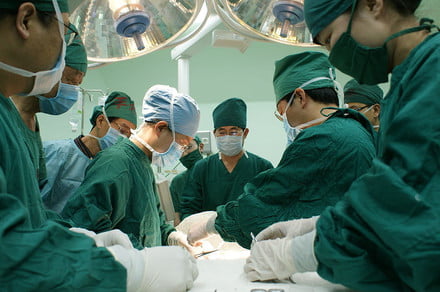 You’re a patient about to undergo heart surgery, but the surgeon performing the procedure hasn’t turned up at the hospital and, in fact, is still 20 miles away at the time that the operation is due to be carried out. A nightmare scenario? Not at all, if it’s anything like a recently reported world’s-first procedure carried out by a surgeon in India.

Using a robot called the CorPath GRX, created by a company named Corindus, five patients were the recipients of the first remote. long-distance heart surgery. The robot was controlled using a workstation with multiple joysticks, which allowed the surgeon to control the robot in real time while getting visual feedback in the form of livestreaming video showing what it was seeing. The procedure performed was something called (PCI), in which a small structure called a stent is used to open blood vessels in the heart that have been narrowed by plaque buildup.

According to a report in The Lancet, “Five patients with single, type A coronary artery lesions treatable by PCI consented to participate. The primary endpoint was procedural success with no major adverse cardiac events (MACE) before discharge … The primary endpoint was achieved in 100% of patients. No procedural complications or adverse events occurred, and all patients were discharged the following day without MACE. The operator scores were favorable, with the operators rating the procedure as equivalent to an in-lab procedure.”

The demonstration was actually carried out last year, although it has taken until now for news to be made public, presumably to allow for the patients to be monitored over the long term to confirm that they responded well to the treatment. However, the time since then has not been wasted. Corindus has used it to perform several remote tests in the U.S. as it continues to work toward its goal of expanding telemedicine to treat patients throughout remote and under-served parts of the world.

This isn’t the first time that robots have been used in the operating room. The world’s first robot-aided operation, a brain biopsy, was carried out in 1985. Since then, robots have been used in thousands of procedures — although never across such long distances. Last year, Digital Trends wrote about an operation carried out at the University of Pennsylvania School of Medicine involving the world’s first robot-assisted spinal surgery. That complex procedure utilized cutting-edge robotic arms to remove a tumor from a 27-year-old patient’s neck, via his mouth.