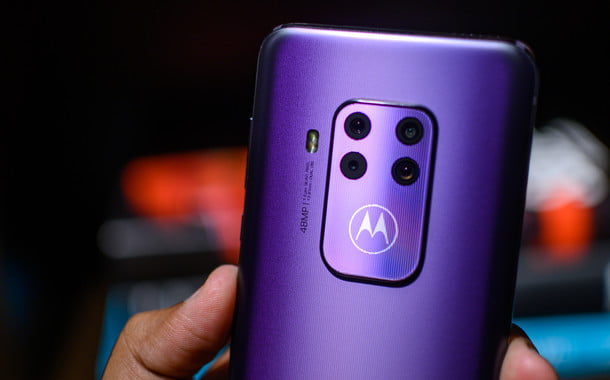 “Motorola’s One Zoom fires a new salvo in the smartphone camera wars with its impressive quad-camera array.”

For just $450, Motorola’s latest phone — the Motorola One Zoom — lets you snap zoomed in photos that don’t look pixelated, capture brighter and shareable low-light photos, allows for wide-angle shots that can take in more of a scene as well as effective portraits. How? It has an array of four cameras on the back of the phone, each serving a purpose, expanding the phone’s overall versatility.

Yet the camera isn’t the only notable part of the One Zoom. It’s stylish, too. I spent some time with the phone, and here’s how it all works.

The Motorola One Zoom is arguably the most attractive Motorola phone to date, especially in Cosmic Purple, a name befitting its epic look. There’s also Electric Gray and Brushed Bronze color options, but you really should go for purple. It’s the phone Thanos would choose.

There’s a beautiful micro-texture that’s visible in the right light on the back, along with an elegantly-placed rectangular camera module containing four cameras. It’s not as jarring as the rumored photos for the Pixel 4 and iPhone 11’s rear design, which carry a similarly boxy camera module. The unique, matte glass texture has the benefit of restricting smudges and fingerprints, so you won’t find the need to keep wiping down the phone.

It’s on the back where you’ll find one of my favorite new features on the Zoom. The Motorola logo underneath the cameras lights up when you receive new notifications, doubling as an LED light. It’s gorgeous and the effect is unique.

The phone is large, with a 6.39-inch screen, but its 19:9 aspect ratio means it’s narrow, making it easy to grasp with one hand (though I do have large hands). It does require a bit of effort to reach the top of the screen, even for me. The display has slim down bezels all around, with just a small teardrop notch at the top housing the selfie camera.

Speaking of the screen, it’s OLED with a 2,340 x 1,080 resolution. Colors don’t look overly saturated and brightness was acceptable. I’ll need to test it outdoors to see how effective it is for use in broad daylight.

The 2.5D glass on the front curves slightly into the edges, making the Motorola One Zoom feel elegant. It doesn’t feel too slippery, but the front screen is protected by Panda King glass and the rear by Corning’s Gorilla Glass 3, so it’s worth slapping a case. The frame is aluminum, which helps the phone feel substantial.

There’s a headphone jack on the bottom (whew) next to the USB-C charging port, and the right edge is where you’ll find a textured power button and the volume rocker above. So where’s the fingerprint sensor? It’s under the display on the front, similar to Samsung’s latest smartphones. It’s just an optical sensor, while Samsung’s flagships use an ultrasonic sensor. I’ve had an iffy relationship with optical in-display fingerprint sensors, so I’m not expecting a great experience with the Zoom.

The Motorola One Zoom is a phone I want to have in my pocket purely because of its design. The Cosmic Purple color and overall aesthetic looks fantastic. But will the camera impress enough to keep it there?

The camera wars rage on. The new Nokia 7.2 has a triple-camera system, joining phones like the similarly-priced Samsung Galaxy A50. Now, Motorola has upped the ante to four.

The main sensor has 48 megapixels with a f/1.7 aperture and optical image stabilization (OIS). There’s a 16-megapixel wide-angle lens with a 117-degree field of view, an 8-megapixel telephoto lens offering 3x optical zoom and OIS, and a 5-megapixel depth sensor to capture better portrait mode photos. Talk about versatile.

Everyone’s jumping on the 48-megapixel camera train these days — we’ve even seen it on the Motorola One Vision, which launched earlier this year — and we’ve explored whether packing so many pixels into a smartphone camera is worthwhile. More megapixels don’t mean better photos, but you can expect a good deal of detail and higher-resolution photos. More importantly, the camera is using pixel binning technology to merge pixels together so they can absorb more light.

Motorola said not to expect the same exact image quality as the camera on the One Vision, which is technically the same, but has software improvements will likely deliver better photos. Night Vision has carried over, another trend with phones. The dedicated night mode stitches multiple images together for brighter night-time photos.

Versatility is the highlight here. Need to zoom in? Use the 3x optical zoom with the telephoto lens. A 10x hybrid zoom option is also available. Need to fit more in the frame? Switch to the wide-angle. There’s a handy toggle next to the shutter that cycles between 1X, 3X and 0.5X, or you can pinch in and out to use the various lenses.

Motorola is facing stiff competition from the likes of the Pixel 3a, the Nokia 7.2, the Asus ZenFone 6, and even the ZTE Axon 10 Pro.

The front camera has 25 megapixels with an f/2.0 aperture, and it uses the same pixel binning technology as the main lens on the rear to absorb more light for selfies, resulting in a 6.25-megapixel photo.

It’s an exciting camera setup that I can’t wait to test, but Motorola is facing stiff competition from the Google Pixel 3a, Nokia 7.2, Asus ZenFone 6, and even the $550 ZTE Axon 10 Pro.

The Motorola One Zoom has a slightly better processor than the Google Pixel 3a — the Qualcomm Snapdragon 675 versus the 670 — with 4GB of RAM. I had no trouble with performance on the Pixel 3a, and I expect the same on Motorola’s phone. The Pixel handled intensive games like PUBG: Mobile without issues, and I expect the same here.

Most phones in this price range have the same or similar hardware as the Motorola One Zoom, but there’s an exception. Asus’ ZenFone 6, which is powered by the same chipset that’s inside phones like the Galaxy Note 10 Plus, can be had for about $500.

The Motorola One Zoom has 128GB of internal storage, which is par for the course on mid-range phones, and supports MicroSD cards if you need more space.

I’m impressed by the large 4,000mAh battery. That should translate to a day of use, if not a little more. Motorola is claiming two days, but time will tell if that holds up. It’s not as big as the ZenFone 6’s 5,000mAh capacity, but it’s more than you’ll find on the Pixel 3a and the Nokia 7.2.

Motorola is only promising one Android version upgrade and “industry-related” security updates.

There’s support for Motorola’s TurboPower fast-charging standard, which the company said gives “hours of power in just minutes of charging,” There’s no wireless charging, but most phones in this price category don’t have the feature.

Unfortunately, the Motorola One Zoom isn’t part of the Android One program. When Motorola launched the One series, it touted the phones as Android One phones, a program from Google that ensures a bloatware-free experience, along with three years of security updates and two years of Android version upgrades.

Motorola is only promising one Android version upgrade and “industry-related” security updates. That means this phone will get Android 10, which just launched, but nothing more. Security patches will arrive only when huge vulnerabilities are revealed. That’s disappointing, because affordable phones like the Pixel 3a and the Nokia 7.2 offer strong software support, and Motorola should, too.

Out of the box, you’ll see a close to stock Android 9 Pie experience. It’s uncluttered and simple to use, which is what software should be on a phone.

The Motorola One Zoom is available in the U.S. now from Motorola’s website for $450. It only works on GSM networks like T-Mobile and AT&T, though. Global availability starts September 5 as well, with a price tag of 439 euros.

While the Motorola One Zoom’s price is reasonable, its biggest issue is that it’s facing a ton of competition in this space. There’s the $500 ZenFone 6 that has a strong camera, a beefier battery, and superior performance. The $550 ZTE Axon 10 Pro also has better performance, a capable camera, and good battery life.

You can also spend less on the Google Pixel 3a, or the Nokia 7.2. These latter phones have superior software support. The Motorola One Zoom will need to impress with its camera if it hopes to score well.

OLED burn-in: What is it and how to avoid it?