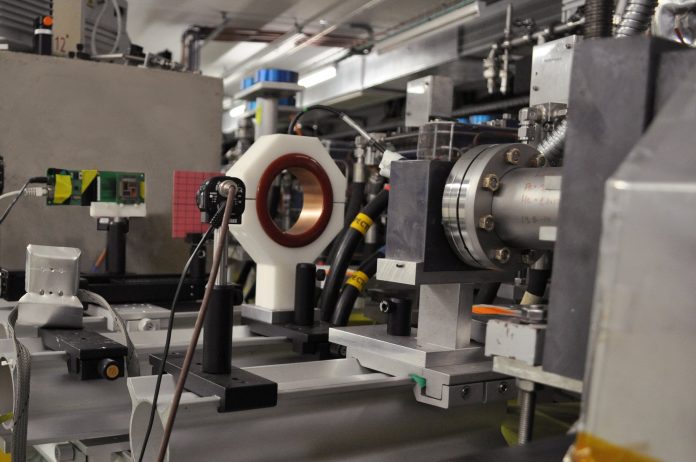 The European Organization for Nuclear Research, or CERN, is most famous for its particle collider, but it also has facilities that can test for other high-energy environments similar to those found in space. Now those facilities are being used to test future spacecraft to see if they are radiation-proof.

The European Space Agency (ESA) will launch the Jupiter Icy Moons Explorer, or JUICE, mission in 2022. Before then, ESA scientists wanted to know what kinds of environmental stresses the explorer will be subjected to when it braves Jupiter’s massive magnetic field. The magnetic field has a volume of a million times that of Earth’s magnetosphere, and trapped within the field are energetic charged particles. These particles form radiation belts which bombard visiting craft with high levels of radiation, which can be harmful to electronics.

To see how the JUICE hardware will handle this radiation, the ESA has borrowed the world’s most intense radiation beam — one located at a CERN facility called VESPER (Very energetic Electron facility for Space Planetary Exploration missions in harsh Radiative environments). Now it is working alongside CERN to develop the testing protocol for other future missions too, such as the proposed Ice Giants mission to Neptune and Uranus.

“The radiation environment that CERN is working with within its tunnels and experimental areas is very close to what we have in space,” Véronique Ferlet-Cavrois, Head of ESA’s Power Systems, EMC & Space Environment Division, explained in a statement. “The underlying physics of the interaction between particles and components is the same, so it makes sense to share knowledge of components, design rules, and simulation tools. Plus access to CERN facilities allows us to simulate the kind of high-energy electrons and cosmic rays found in space.”

As well as offering its facilities, CERN will also collaborate with the ESA to develop components for the testing process, creating hardware which can withstand radiation.

The radiation testing isn’t only for probes like JUICE, however. Another important consideration is how space radiation affects astronauts who pass through radiation belts closer to Earth, as Petteri Nieminen, head of ESA’s Space Environments and Effects, explained: “The ability to simulate cosmic rays benefits a huge number of missions… it is also a huge interest for human spaceflight and exploration to study radiobiology effects of heavy ion cosmic rays on astronaut DNA.”