Come to Halcyon on The Outer Worlds in its latest trailer 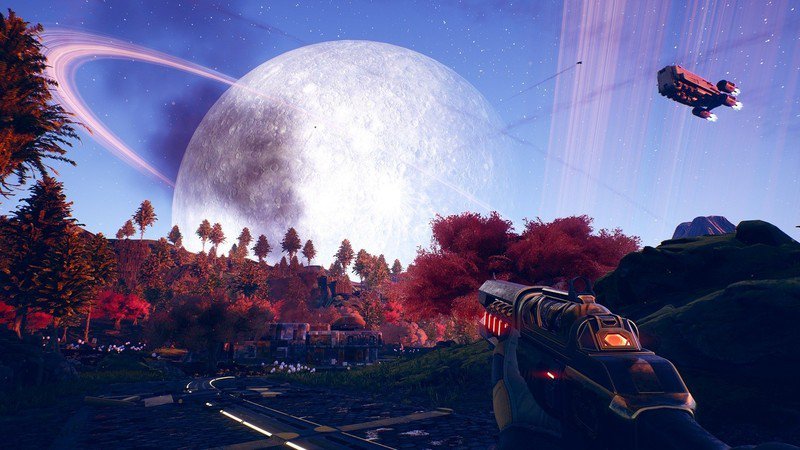 Obsidian is moving beyond Fallout to work on its very own new IP.

Microsoft’s acquisition of Obsidian Entertainment isn’t stopping the studio from developing for the competition, at least in regards to The Outer Worlds. After spending some time with pre-existing IPs like Star Wars and Fallout, Obsidian has moved on to a wholly new property that takes the developer’s experience with RPGs and combines it with their love of science fiction. 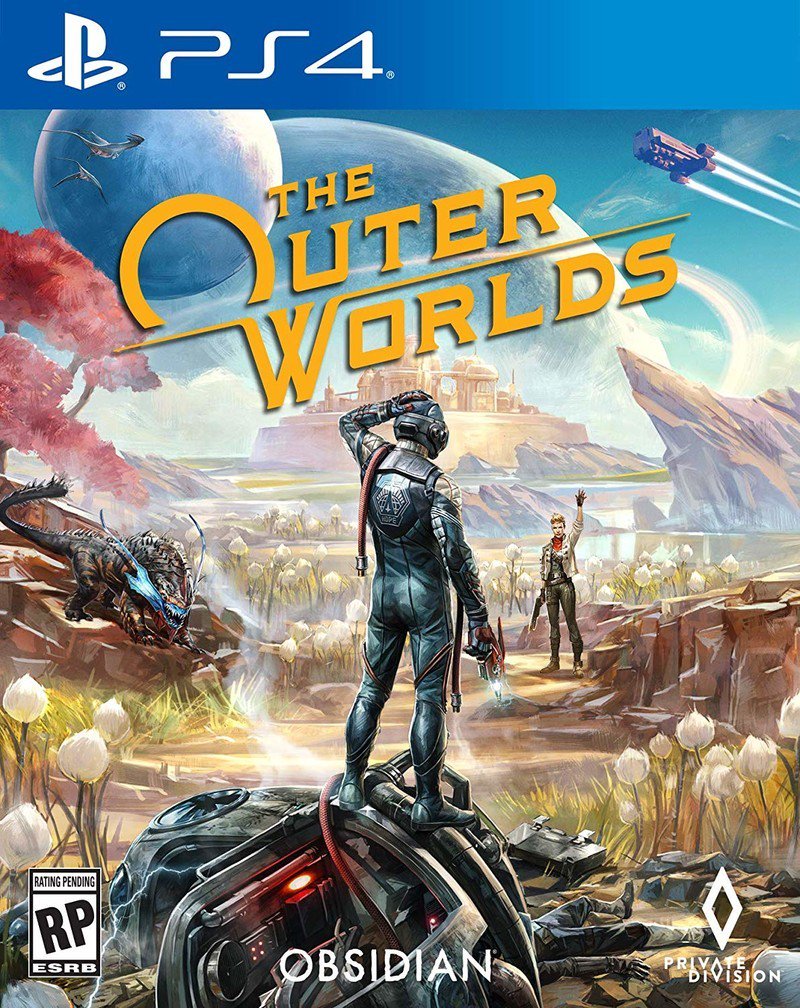 The Outer Worlds is looking to be Obsidian Entertainment at its best, a tightly-focused RPG where your choices matter. Will it make good on that promise? Only time will tell, but it looks damn good so far.

What’s new with The Outer Worlds?

Leading up to its release we’ll keep you up to date with the latest information surrounding The Outer Worlds.

Come to Halcyon, as the trailer says. Who wouldn’t want to work on a planet with hostile animals left and right, seedy gangs, and corporations that exist solely to exploit your hard labor? Sounds fun. But Obsidian does make it fun with the studio’s penchant for humor, much like Fallout: New Vegas.

Obsidian has released a 20-minute gameplay demo that was originally showed off behind closed doors at E3 2019. The entire ideo is accompanied by commentary from Senior Designer Brian Heins. The mission is set on one of the planets from The Outer Worlds called Monarch in the town of Fallbrook, which is described as a “haven for illicit activity.”

The Outer Worlds graced Microsoft’s E3 2019 press conference stage with a brand new trailer, this time giving up a glimpse of the story and conflict that will unravel after we jump in. Obsidian also revealed at this point that The Outer Worlds will release on October 25, 2019.

What is The Outer Worlds?

The Outer Worlds is certainly no Fallout: New Vegas 2, but it’s apparent that Fallout’s influences have bled into it. From its dialogue system to its choices and humor, this pulpy sci-fi RPG will feel just as familiar as it will different. Being on a tight budget, there may even be some jank that players have grown accustomed to.

And the timing of the announcement almost couldn’t have been better for Obsidian. With Bethesda facing the brunt of player backlash after Fallout 76 failed to live up to expectations, people were clamoring for Obsidian to return to Fallout and recapture the series’ former glory. That didn’t end up happening, but what the studio did announce turned out to be the next best thing.

From the creators of Fallout and Fallout: New Vegas

Obsidian’s name may not be attached to Fallout or Fallout 2, but many of its developers are alumni of Black Isle Studios and Interplay Productions, the two companies that did create the franchise. In fact, one of the original Fallout’s directors—Tim Cain—is a co-director on The Outer Worlds. According to Cain, around 20% of The Outer Worlds’ staff worked on Fallout: New Vegas for the company as well. A fraction of The Outer Worlds team also had a hand in the first two Fallout games.

A story that takes us to the edge of the galaxy Set in the far reaches of our own galaxy, The Outer Worlds puts players in the shoes of a colonist who awakens long after they were supposed to and finds the edge of the galaxy already a colonized corporate hellhole. Thanks, capitalism. The universe of The Outer Worlds is one of corporate greed that sees most forms of discrimination fall to the wayside in favor of classism and employers’ rights. It doesn’t matter who you are so long as you’re slogging through another work day to benefit your boss.

Your character gets wrapped up in the middle of a conspiracy that threatens to destroy the colony and everything that its capitalistic society has built there. The choices you make will affect the outcome of events as the story progresses, and the game will feature multiple endings as such. Don’t expect a grand adventure like you would with Fallout, though. While Obsidian is appreciative of the enthusiasm, it’s best to temper expectations as its budget limits its scope to an extent. The Outer Worlds isn’t meant to be a wide open sandbox that players can spend hundreds upon hundreds of hours in. You can’t just go off and visit any location you see in the distance. The Outer Worlds is more contained than that, but it still gives a sense of freedom and players will be able to visit a couple of different planets.

Obsidian tends to liken the scope of the game to Knights of the Old Republic 2, or maybe even a tad smaller. It’s fair to estimate that players can get dozens of hours of playtime, especially if they play it more than once. In an interview with Game Informer, co-directors Tim Cain and Leonard Boyarsky said that 15-40 hours is a reasonable frame of reference for the average player. 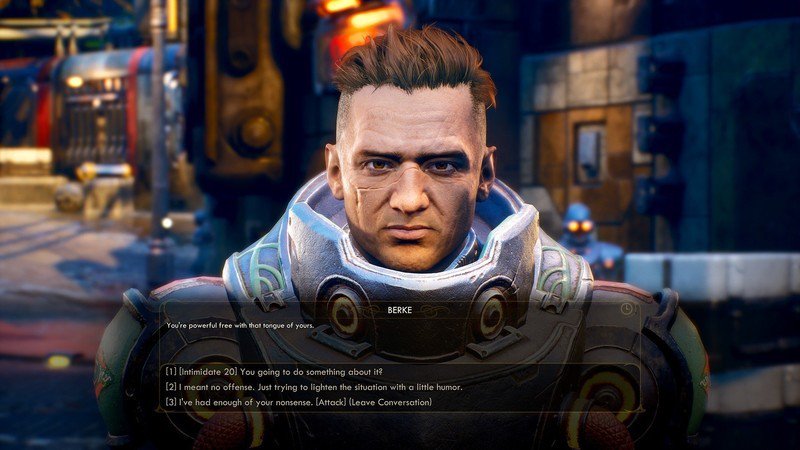 All of the good stuff that you love from RPGs will be making an appearance in one form or another. Factions? You got it. Character creator? Hell yeah. Upgradable skills and abilities? That too. Branching dialogue along with a reputation system? Yup. The one thing it seems to be missing is the ability to romance your companions. Essentially, Obsidian wanted to focus more of its time and resources into the game’s reactivity and replayability and less on the characters’ bangability.

Obsidian ensures that the companions that players will meet will be both interesting as individuals and fit well within a group environment. “We knew we needed companions with sort of that Firefly flavor,” said narrative designer Nitai Poddar to Game Informer. “We wanted them to be a band of, not quite misfits, but different personalities coming together on the same ship. And we knew we wanted a fairly confined number of them so that each would be individual.”

Players will be able to take two companions with them on missions, but that doesn’t mean they’re required. Should you choose to play entirely by yourself, without even an NPC helping you along, you can do so and not recruit them. And even if you do want them by your side, they may not stick around forever if your actions and choices don’t sit well with them. “We do have ways that a companion can choose to leave you,” said senior narrative designer Megan Starks.

The Outer Worlds caters to all sorts of playstyles, whether you like to blast through everything in your path or prefer the silent and stealthy approach. The developers aren’t entirely certain if the game can be beaten without killing anyone (though they hope so), but players can give it a go to see just how far they can make it without drawing blood. On the flipside, you can indeed kill everyone and still beat the game. 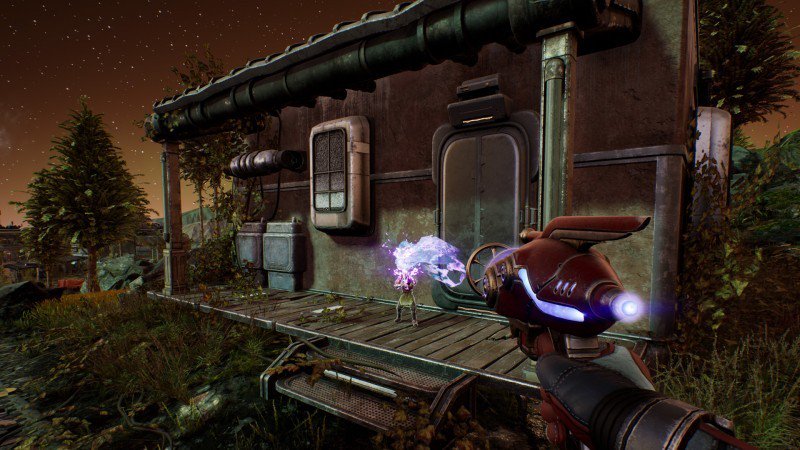 Aside from the more “traditional” weapons (as traditional as you can get in a game set on another planet), The Outer Worlds will also have a category of weapons called Science Weapons that are outlandish and don’t adhere to rules of realism. One such weapon is the Shrink Ray, which as you can probably guess, shrinks enemies to hilariously small sizes. So far there are five Science Weapons in the game and they will be difficult to come by. Though Obsidian hasn’t revealed all of them yet, the studio did say that another one, a melee weapon, is internally referred to as The Ugly Stick. Let your imagination run wild with that one.

While it takes place on an alien planet, The Outer Worlds won’t have any intelligent alien lifeforms like Mass Effect does, though there will be alien creatures that are more akin to monstrous animals. Because of this, the character that you create and the people that you interact with will be human as well. This still takes place in our galaxy, it’s just not taking place in the same timeline as the real world. The timeline in The Outer Worlds is an alternative history where it split off from ours around the time of Einstein.

Can you mod it? 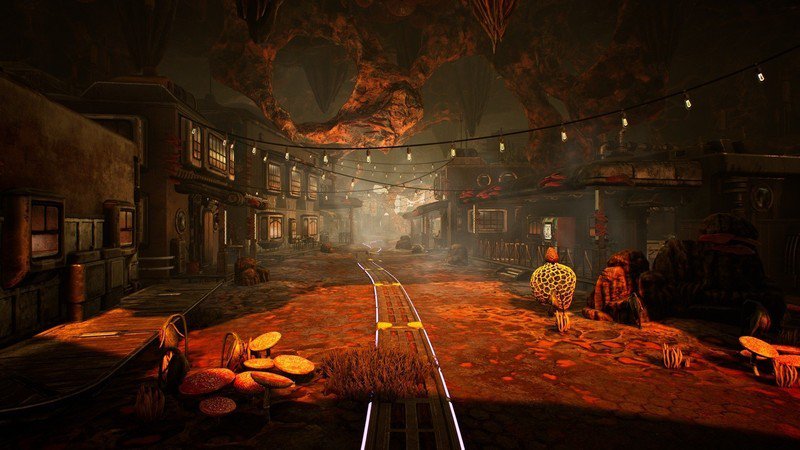 A staple of RPGs like this is the ability to mod them, and you should be able to do so with The Outer Worlds down the road in some capacity. Though Obsidian says that there will not be mod support at launch, the developer will look into it after the game ships to see what kind of support it can have. Modding has a huge community that Obsidian wants to make sure isn’t forgotten or neglected.

Will there be microtransactions?

Players can get their hands on The Outer Worlds on October 25, 2019. Despite Obsidian now being owned by Microsoft, The Outer Worlds will still be available on PlayStation 4 as well as Xbox One and PC.

The Outer Worlds is looking to be Obsidian Entertainment at its best, a tightly-focused RPG where your choices matter. Will it make good on that promise? Only time will tell, but it looks damn good so far.

Updated September 2019: Obsidian has released a trailer that highlights a few of the planets we can visit in The Outer Worlds.

Stay plugged in with these wired headphones for the Galaxy S10

Many phones are getting rid of the 3.5mm jack, including the new line of Galaxy S20 phones, but the Galaxy
Read more
News

Apple fans should jump on this deal for Apple Watch Series, which adds some fantastic features to the smartwatch.
Read more

Stay plugged in with these wired headphones for the Galaxy S10

Many phones are getting rid of the 3.5mm jack, including the new line of Galaxy S20 phones, but the Galaxy
Read more

Apple fans should jump on this deal for Apple Watch Series, which adds some fantastic features to the smartwatch.
Read more

How to transfer your contacts from iPhone to Android

You've made the brilliant decision to switch from iPhone to Android. Congratulations and welcome! Now you just need to get
Read more