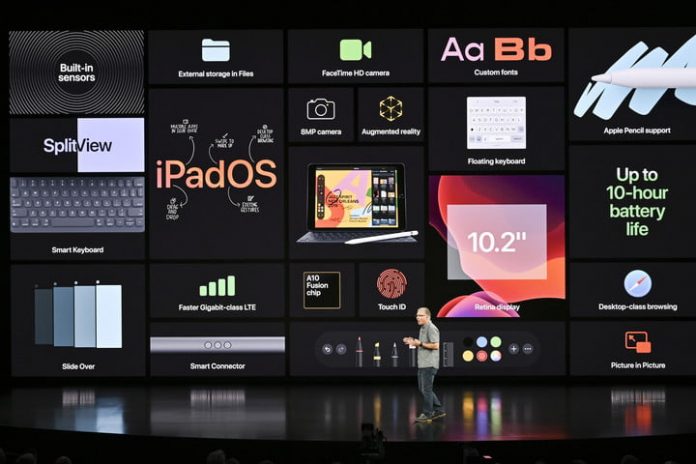 The new seventh generation iPad brings a few improvements to Apple’s cheapest tablet. First of all, the screen is bigger, sharper, and brighter than ever before. The new iPad boasts a 10.2-inch Retina display with three times the pixels of last year’s iPad. The resolution is 2,160 x 1,620 pixels. It’s also much brighter and offers a much wider viewing angle, which should be great for sharing content.

The smart connector means that you can attach one of Apple’s keyboard covers and press it into service as a laptop stand-in. It has plenty of power under the hood with an A10 Fusion chip, which is enough to power demanding games, augmented reality apps, and productivity software. Battery life is still estimated at up to 10 hours. There is deeper integration with the Apple Pencil, though it is the first generation Apple Pencil, which is sold separately for $99.

Naturally, the new entry-level iPad will run iPadOS and it brings a raft of new features to take advantage of some unique capabilities. That means desktop-class browsing on Safari, the ability to pinch the onscreen keyboard to shrink it, and the option to create PDF documents of webpages. There’s also the split-screen mode and picture-in-picture for multitasking.

You can pick up the new iPad with 32GB or 128GB of storage. You can also connect an SD card or thumb drive via the Lightning port with the right accessories to review images, and the enhanced Photos app offers more editing options than ever before. Other features include Touch ID, an 8-megapixel main camera, and a 1.2-megapixel FaceTime camera.

Apple’s environmental commitment shines through with the news that the new iPad’s closure is made from 100% recycled aluminum. It comes in silver, space gray, or gold.

This subtle upgrade brings a few improvements, but Apple is keeping the price at $329, making its most affordable iPad more attractive than ever. Schools can get the iPad for $299. The model with cellular support starts at $459. You can order now and it will start shipping on September 30.