Home News Apple’s iPadOS has arrived — here’s how to get the most out...
News 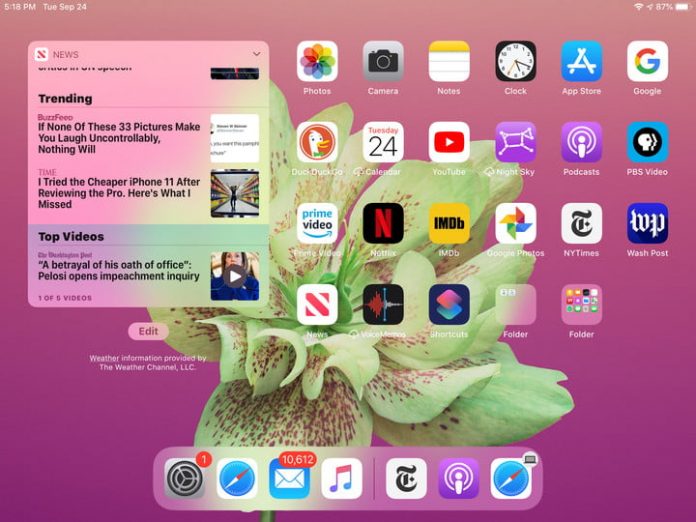 After nearly a decade in the wild, Apple’s iPad tablet finally has an OS to call its own — and it doesn’t come a moment too soon.

Despite operating on ostensibly the same iOS as the iPhone, the experience on the iPad often diverged from that on the iPhone. The screen real estate demanded innovations, while both hardware and software developers were committed to pushing the product’s capabilities beyond the confines of creativity and consumption into hardcore productivity.

Alongside its sidekick Apple Pencil and a keyboard, the iPad can now realistically substitute for a laptop under certain conditions. It may not be there yet, but getting its own discrete OS will continue to propel it in that direction. It helps that iPadOS runs on all current and supported iPads dating back to the iPad Air 2 from late 2014 (though the iPad Mini 3, released at roughly the same time as the iPad Air 2, is not supported).

The new iPadOS incorporates nearly all of the features included in iOS 13, including the famous Dark Mode, an enhanced Photos app, a Find My app, Sign In with Apple, improved Maps, and more. With the debut of iPadOS, there are plenty of new and enhanced features designed exclusively for Apple’s tablet. We’ll walk you through a few of the high-profile ones.

The new iPadOS experience begins with a revamped home screen that fits two elements into the same space. The app icons, pushed to the right side of the screen, are smaller and grouped together, as the screen makes room for widgets, called Today View, on the left side of the screen. Just swipe from left to right to reveal it, then swipe up and down to see its default contents. It’s likely you will want to make some changes. Widgets show up both in landscape and portrait orientation, though with the latter, you will only be able to view either the Today View or the app icons, not both at the same time. Here’s how to customize your home screen widgets.

With the split view in iPadOS, you can access different apps, or different parts of one app, on the same screen. It’s great for photo sorting, email, and note-taking. To use iPadOS’s advanced multi-app features, make sure you have first enabled them in the settings. Toggle on all tfour choices to see which ones will be most useful to you.

Slide over gets a makeover

The iPad slid- over feature now lets you keep multiple apps open in slide-over mode and switch between them with a swipe. Once you get fluid with the technique, it provides a quick and easy way to juggle several apps at once without having to return to the dock or navigate around.

One app, many windows

With iPadOS, you can now view one app in several windows on screen to see different operations. Using drag and drop, you can create an app instance from a note, email, webpage, or any app that supports the feature. Here’s how to get started.

You can also open multiple windows of the same app with the App Expose feature, which lets you see all the open windows for an app by tapping its icon in the Dock.

With iPadOS, Apple introduces new finger gestures for text select, cut, copy, paste, undo, and redo. To select text in an app like Notes, just double-tap at the desired point in the narrative until the text is highlighted and then drag it to include as much text as you want. Then, with any three fingers, pinch to copy and expand. It doesn’t matter which three fingers you use, though I found it a bit easier to use my thumb, forefinger, and middle finger. If your tapping and swiping is successful, you’ll see a notation at the top of the screen.

Unlike previous versions of iOS, Files in iPadOS now lets you create new folders and move files locally, and supports iCloud Drive for sharing folders with others. This means you don’t need to rely on a third-party sync to store particular files on your iPad and you can access files on a USB drive, SD card, or hard drive. The new Column View lets you browse files within nested folders. With Quick Actions, you can easily rotate, mark up, or create a PDF within the Files app.

The Tools Palette has been visually overhauled in iPadOS. It still has all the brushes and pencils and magnifiers you’re used to, but now you can minimize the full-sized palette into a small circle and pin the palette to any screen edge or corner and tap and drag it back to full size. You no longer have to take a screenshot — you can use the tool palette in any app that supports it, mostly as a Quick Action from the Share Sheet.

The new pinch-to-shrink gesture for the QuickPath Keyboard lets you reduce the size of the electronic keyboard and move it to wherever it’s convenient for one-handed typing. Make sure the feature is enabled in your settings. Note that QuickPath typing only works on the floating keyboard, not on the regular-sized keyboard.

The new iPadOS is the latest OS for Apple’s tablet, and it’s pretty much iOS 13 with some special features thrown in because a tablet is different than a phone. Overall, there are some excellent productivity features in the new OS, but some of them may prove challenging and less than intuitive. Patience and a light hand will assist in getting the most out of the new advanced features.

Facebook
Twitter
Pinterest
WhatsApp
Previous articlePhotoshop’s Content-Aware Fill is about to get even smarter with auto selections
Next article15 problems with the MacBook Air, and how to fix them