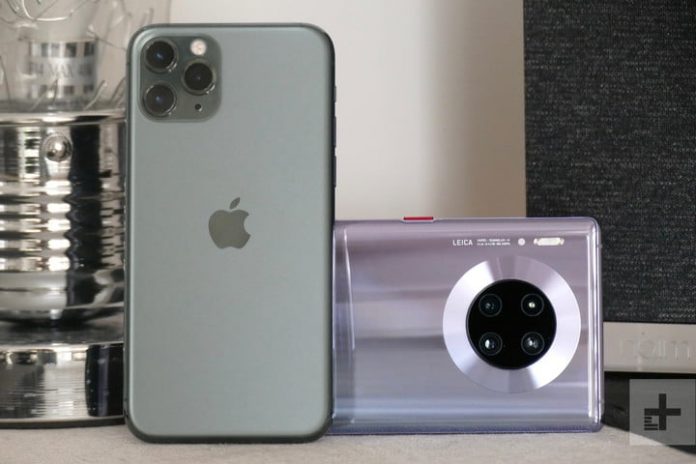 When it comes to the camera, Apple has seriously stepped up its game for the iPhone 11 Pro. But Huawei has also refined and improved the camera system for the Mate 30 Pro. Both these phones were announced within a few days of each other, with big claims made about their respective cameras.

Over a weekend, equipped with both the Apple iPhone 11 Pro and the Huawei Mate 30 Pro, I took a series of photos with both phones to see how they both perform, and which takes the best. Here’s what I found.

Which one can you buy?

The Apple iPhone 11 Pro is available to buy right now, and the camera configuration is the same as the iPhone 11 Pro Max, so expect the same results regardless of which screen size you choose (even the iPhone 11’s results will be the same, except for those shot with the telephoto lens. The Huawei Mate 30 Pro will be released in October, but in limited markets, meaning you can’t buy it in the U.S.

The Apple iPhone 11 Pro has three 12-megapixel camera lenses on the back: A wide-angle, an ultra-wide lens, and a telephoto lens (2x zoom). Both the wide and the telephoto lenses have optical image stabilization, and there is a new Night mode too, though it only on the main lens. Everything is driven by the A13 Bionic processor and image signal processor.

The Huawei Mate 30 Pro has a pair of 40-megapixel main camera lenses, the Cine lens and the SuperSensing lens, plus an 8-megapixel telephoto lens and a 3D depth sensor too. The telephoto lens takes 3x optical shots or 5x hybrid, there’s artificial intelligence for scene recognition and special effects in video mode. Night mode has also been improved.

How we tested the cameras

This is not a scientific test. If you are looking for complex graphs and tables about how each camera handles light and color, prepare to be disappointed. I took both cameras away on a short break and took photos as I went, in a similar way to how many people use their phones. I explored different features, and got to grips with the camera apps.

The idea is to see how these cameras perform in the real world. Where are the strengths, and where are the weaknesses? Which camera takes the photo we want to quickly share, or that effectively captures the scene the way we wanted? Are the features offered fun, or are they just gimmicks? That’s the aim of this test.

That said, I examined the photos on the phone screens, on a laptop, and on a calibrated monitor. Many people will only ever look at their pictures on their phone, but for the purposes of the test, it’s important to look at the pictures closely on different screens.

Logs in a doorway

Both these are great photos. Taken inside a pub, after 8 p.m., and in dimly lit conditions, each was taken with night modes. The end results are atmospheric but different. The iPhone 11 Pro’s photo captures the white of the window frames perfectly, and the light from outside shining in on the logs looks great. The warmth and natural tones look superb. The Mate 30 Pro diffuses the light on the logs more, revealing a lot more detail in the shadowy areas, while giving the scene a warmer look than the iPhone.

Which you prefer will be subjective, as they’re both good quality. I’m a fan of the iPhone shot with its natural colors and shadow.

Boats in the harbor

This was shot using 2x zoom on both phones, and while it’s optical on the iPhone at this level, it’s likely hybrid on the Mate 30 Pro, as I didn’t opt for the 3x telephoto lens. There are a number of obvious differences between the two. The iPhone’s shot is more vibrant, with better colors and more life, while the Mate 30 Pro’s shot a more muted that’s a little lifeless.

In truth, real life was somewhere in-between these pictures, but it’s closer to the iPhone’s shot. Zooming in further there is more clarity in the iPhone’s picture, too. The little white sign on the jetty is readable in both images (it states only Ribs owned by the club can be moored there), but it’s clearer in the iPhone’s photo.

It may not look like it, but these two photos were taken within seconds of each other, despite looking like quite different weather conditions. The Mate 30 Pro is under-exposing a little, making scenes less vibrant than the iPhone 11 Pro. The Mate 30 Pro does love to show texture though, and the walls, moss, and paving all looks more natural and weathered than the iPhone.

Examine the full picture more closely, and the iPhone 11 Pro shows plenty of detail, but the Mate 30 Pro highlights the details that matter. The lantern hanging from the wall, the top of the well, and the leaves on the roof in the background all look wonderful. On the iPhone, the cracks in the wooden seat behind the stocks are more clearly visible, and even the welts in the wood can be seen better too. The Mate 30 Pro smooths these areas a little too much. However, the overall tone of the Mate 30 Pro’s picture is more preferable to me.

Scooby-doo in the arcade

Taken at night inside a neon-lit arcade, the lighting proved to be a challenge for the iPhone 11 Pro, but no challenge at all for the Mate 30 Pro. Zoom in close to Scooby’s face and the iPhone’s image isn’t too sharp, while the Mate 30 Pro is pin-sharp even zoomed right in. Take a look under the Scooby-doo sign at the “Mega Change” machine, where the color is more vibrant, the text clearer, and you can clearly read the letting on the coin too.

This is an easy win for the Mate 30 Pro.

Two more pictures that really don’t look anything like each other. On top of a very blustery hill, this shot uses the wide-angle camera on both phones and emphasizes the difference in viewing angle between them. The iPhone takes in more of the scene, and the image is more colorful, better exposed, and the saturation in the foliage towards the front of the shot looks attractive.

This area is missing from the Huawei phone’s picture, despite me standing in the same position to take both photos, and the brush’s purple flowers aren’t captured at all. The lighter blue sky and less intimidating clouds on the iPhone’s shot make it a happier picture, and one I’d keep over the Mate 30 Pro’s.

Here’s where a higher quality, longer zoom comes into play. The lion was behind the fence (thankfully) and I stood at least a meter behind another fence, making a zoom photo the only option to take a decent shot. The iPhone 11 Pro’s 2x optical zoom got me up close, but the Mate 30 Pro’s 3x optical zoom got even closer.

The difference between the two is considerable. The coloring on the Mate 30 Pro’s picture is beautiful (albeit a bit over-saturated), and you can keep zooming in to capture stunning detail. It’s a fantastic photo that even manages to avoid focusing on the bars and locks in on the lion’s eye instead. Excellent. The iPhone 11 Pro’s photo is also high quality, but it can’t quite match the Mate 30 Pro here, not least because it couldn’t get as close.

A difficult shot for the artificial intelligence here, due to the similarities in color between object and background, plus the out-stretched arm. The iPhone 11 Pro wins it, perhaps surprisingly, as Huawei’s Aperture mode and its A.I. have consistently beaten most other phones in this type of test before.

The iPhone 11 Pro picks the statue out perfectly and gets the entire arm in focus for a great 3D image. The Mate 30 Pro lets the arm taper out into a blur, which isn’t a crime, but here it makes the image look awkward, as our eyes know it’s associated with the statue and therefore should be in focus. The iPhone 11 Pro also captures the texture and weathering on the statue more effectively, too.

Using the standard portrait mode on both phones, I like the results from both. The iPhone 11 Pro image is the least tampered with — even though I didn’t use the beauty mode on the Mate 30 Pro at all — and my face is far less smoothed out. You can certainly see I didn’t shave in the morning.

Impressively, both cameras capture the edge of my glasses well. The overall bokeh effect is really good in both images. The iPhone 11 Pro wins because it actually looks like me and my skin tone, while the Mate 30 Pro changes the tone a little too much. I also like the strong blur effect on the iPhone, although this aspect can be altered on the Mate 30 Pro, and some of its alternative portrait modes have a much higher blur than this image.

Out of eight categories, the iPhone 11 Pro won five, compared to the Mate 30 Pro’s three wins. It was a tight race, although there were several categories where both phones had decisive wins. It’s evidence of how much work Apple has done on the iPhone’s camera, which feels more advanced than previous generations. Especially impressive is the Night mode.

It’s worth mentioning the Mate 30 Pro is a pre-release model, and the software for the camera is not entirely final, as evidenced by DxOMark using a future build of Huawei’s camera software in its high-scoring test. It will be interesting to revisit this test when the build, or a further tweaked version, is released to the public.

In the meantime, the iPhone 11 Pro takes the overall win, with the Mate 30 Pro close behind it.

Microsoft and Google both offer word processing programs but are quite different. Which one is best for you?
Read more
Comparison

Its 2020 and yet the battle of the mobile application continues between the giants. AndroidOS and iOS are the oldest enemies on the block....
Read more
Comparison

The Samsung Galaxy S20 and OnePlus 8 are neck-and-neck, but which comes out ahead, and how much will it cost?
Read more

Previously, the maximum RAM count was 4GB. The new version has 8GB.What you need to knowRaspberry Pi 4 comes in
Read more

The law currently protects media platforms, and it's going to take a whole lot more than this order to change
Read more

Disney Plus Price: Bundles, Deals & How To Get A Year Free

It may have taken its sweet time getting here, but the long-anticipated Disney Plus (or Disney+) streaming service is now
Read more