Home News The black hole at the center of our galaxy is flaring and...
News 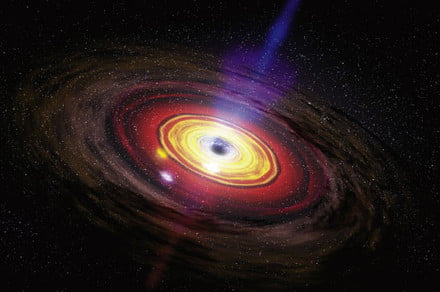 At the heart of our galaxy lies a supermassive black hole, Sagittarius A* (pronounced A-star, and also known as Sgr A*). Normally this giant monster is relatively docile, but recently it has been a hotbed of unexpected activity.

It turns out that Sagittarius A* is not as stable as we thought — it is actually emitting bright flares of energy, rapidly glowing 75 times brighter than normal for brief periods. Astronomers from the University of California Los Angeles observed the flares of near-infrared wavelength light, which are the brightest ever seen, from the W. M. Keck Observatory in Hawaii.

“I was pretty surprised at first and then very excited,” first author of the paper, Tuan Do of UCLA, told ScienceAlert. “The black hole was so bright I at first mistook it for the star S0-2, because I had never seen Sgr A* that bright. Over the next few frames, though, it was clear the source was variable and had to be the black hole. I knew almost right away there was probably something interesting going on with the black hole.”

The flare occurred on May 13 and was observed for two hours of activity which were compressed into a video that Do shared on Twitter. In the video, you can see the brightness of the black hole blazing and then dimming. It’s not the black hole itself that gives off light, Do explains, but the hot gas which falls into the black hole. Astronomers still aren’t entirely sure why this happens or how long it will last, however.

It could be that a large gas cloud approached Sgr A*’s event horizon and was absorbed by the black hole, which would give out energy in the form of radiation. Alternatively, the passage of a nearby star, S0-2 (the same star that Do mistakenly thought he was observing at first), could have changed the way that gas flows into the black hole. This would change the way that the black hole gives off light. To discover which of these answers is correct, the astronomers will need to collect more data from both the Keck Observatory and from other telescopes like Spitzer or Chandra.

The findings are available to view in a paper on pre-publication archive arXiv.org.