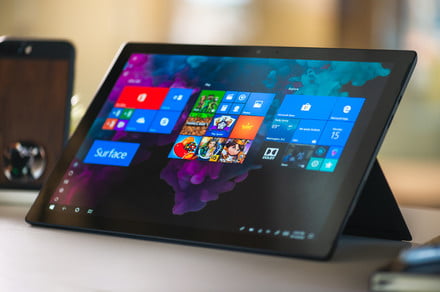 Numerous complaints have flagged throttling issues with a pair of Microsoft Surface devices that are significantly slowing them down.

Surface Pro 6 and Surface Book 2 devices are being throttled down to Pentium 2 speeds of 400 MHz, according to TechRepublic, with an increase in the frequency of reports after a firmware update was released for the Surface Pro 6.

The Surface Pro 6 runs at a minimum of 1.6 GHz while the Surface Book 2, which received an upgraded processor earlier this year, goes at 1.7 GHz. The throttling issue limits the devices to about a quarter of their processing speed, for a massive drop in performance that their owners will surely notice.

The problem is apparently due to an Intel CPU flag named BD PROCHOT, which stands for bi-directional process hot. The safety feature is designed to keep systems from overheating. It can be set by any peripheral and may kick in even if the CPU is within its temperature limits if another component is becoming too hot.

Some owners of the Microsoft Surface devices said that removing the devices from their docks or AC adapters fixes the throttling problem, while some claim that the issue is caused by third-party antivirus software. However, there are some reports that even rebooting the systems do not set the processor speeds back to normal.

The BD PROCHOT flag is not new and is not unique to the SurfacePro 6 and Surface Book 2. However, the increasing number of reports, as well as the recent firmware update, suggests at least a correlation between the feature and the affected 2-in-1 Surface devices, according to Tech Republic.

Fortunately, Microsoft is aware of the throttling problem.

“We are aware of some customers reporting a scenario with their Surface Books where CPU speeds are slowed,” a spokesperson for Microsoft told TechRepublic. “We are quickly working to address via a firmware update.”

The true reason behind the throttling remains unconfirmed, and Microsoft has not shared the timeline for the release of the firmware update that will address the problem. In the meantime, affected Surface Pro 6 and Surface Book 2 owners may try the suggested solutions while waiting for the fix.

The first Apple Silicon MacBook is due out by the end of 2020. What should you expect? We have rounded up everything you need to know about Apple’s new laptops.
Read more

The OnePlus 8T will be announced on October 14, and we know most of the details

OnePlus shows no sign of stopping its successive release of great phones. The OnePlus 8T will arrive on October 14 — and we know a lot about it already.
Read more

Apple’s new smartwatches have a lot in common, but there are also some key differences. Here’s a breakdown of the two, and which one is best for you.
Read more

Did we mention it has Baby Yoda instant film?What you need to knowPolaroid has just announced a very special camera.It's
Read more