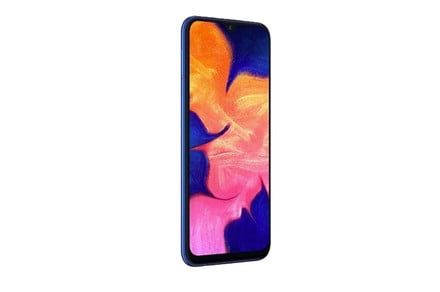 Samsung introduced its A-Series lineup earlier this year, featuring phone models that range from the low-end to the mid-tier level. One of its cheaper phones, the Galaxy A10, is perhaps the most watered down when it comes to specs but still boasts enough workable features and a surprisingly fast performance that makes it a recommendable smartphone.

You can get the Samsung A10 on Amazon for 19% off. Instead of its usual price of $180, get a factory unlocked unit for the very affordable price of $142.

When it comes to its build quality, there’s really nothing to write home about the Samsung Galaxy A10. It is constructed entirely of plastic that has a glossy finish, with a unibody design that extends to the phone’s sides. It is pleasantly lightweight at just 0.64 ounces and feels firm in the hands.

On the back of this phone, you’ll see a single 13-megapixel camera (quite unlike the rest of the A-Series lineup which boasts multiple rear cameras) with an LED flash underneath it. On the upper right side of the phone are the power and volume control keys. This phone can support two SIM cards, so you have the option to have two mobile carriers at the same time. No need to get an extra phone. Although it has an internal memory of 32GB, you can choose to expand the phone’s storage to up to 1TB as it has a dedicated microSD slot.

This phone has a V-shaped notch on the top with a 5-megapixel selfie camera, a design it shares with a lot of recent phones starting with the iPhone X. Some people like it, some people don’t. That’s because the notch blocks a certain amount of the screen which can be irritating when watching videos.

It has a 6.2-inch IPS display with a 720 x 1,520 pixels resolution. Despite being a lower-tier phone, the screen can get pretty bright and possess what Samsung calls “adaptive display.” This means it can automatically adjust its brightness depending on the amount of light in the surroundings, making it power efficient.

The Samsung Galaxy A10 runs on Android Pie with Samsung’s proprietary software One UI version 1.1., one of the finest mobile OS that doesn’t come with a lot of bloatware. Working with an Exynos 7884 chipset and 2GB of RAM, the Galaxy A10 runs exceptionally fast for an entry-level phone.

The camera works fine if a little underwhelming. Unlike the Galaxy A9 which has four rear cameras, one of which has a depth-sensing lens, this phone does take good photos but cannot take shots with a blurry background effect. The colors are nicely balanced, and the details look sharp and accurate.

The Samsung Galaxy A10 is a good entry-level phone with an awesome display and an excellent performance that comes with a very reasonable price tag to boot. Get it for just $145 on Amazon.

For more options visit this page for our best smartphones for 2019. And for more awesome deals visit our curated deals page.