Amazon and Postmates’ delivery robots heading to more sidewalks in the U.S. 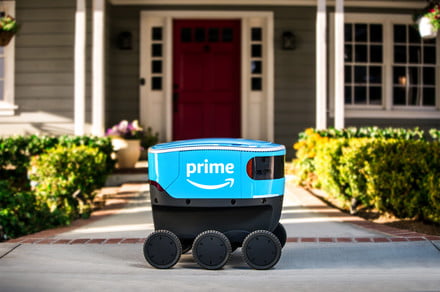 As an online shopper, you probably couldn’t give two hoots how that emergency order of toilet paper arrives at your door. Whether it’s a drone, robot, or human, all you really care about is that it arrives before anything calamitous happens.

Nevertheless, a growing number of companies are working on ways to increase the efficiency of their delivery operations as online shopping continues to grow, with solutions likely to include autonomous technology such as the aforementioned drone and robot.

While drones clearly have the upper hand over wheel-based robots when it comes to speed, strict regulations mean a delivery service using self-piloting aircraft is still a ways off.

Regulations exist for the delivery robots, too, but are a little more relaxed, a situation that’s encouraging a growing number of companies to develop the technology.

In recent days, for example, Amazon and Postmates have each offered updates on their own robots as they attempt to incorporate them into their delivery operations.

Amazon is about to expand tests of its robot, called Scout, to the city of Irvine, just south of Los Angeles, California. It follows trial deliveries in a single neighborhood in Snohomish County, Washington, earlier this year, when the company first announced Scout.

“While in the Pacific Northwest, Scout has experienced all of the region’s weather — from the expected rain shower, to the infrequent sun, and even the biggest snowstorm the area [has] seen in the last decade,” Amazon’s Sean Scott wrote in a blog post. “It’s now time for Scout to experience a little more sunshine [and so] Scout will begin to deliver packages to customers in Southern California.”

Several Scouts, each equipped with sensors and cameras to ensure safe navigation, will make trial deliveries to Amazon customers in Irvine from Monday through Friday during daylight hours. You can see the robot in action in the video above. To ensure that testing goes smoothly, each Scout will be accompanied by a human “ambassador” to ensure everything runs smoothly, though of course at some point the aim is to send the robot out alone.

On-demand delivery startup Postmates unveiled a similar kind of robot, called Serve, at the end of last year, and recently it received conditional approval from San Francisco officials to start trials in public spaces, according to TechCrunch.

Serve has both a ring of flashing light on its top and large “eyes” that move around to signal its movement intentions to people close by. It’s also monitored remotely by a human operator when it’s out on the street, and includes a “help” button that passers-by can press to speak to the operator in case of a problem.

As with Scout, Postmates’ robot will also have someone walking close by during the trial phase to monitor its movements and assist with any issues.

For many observers, the true test with these robots will come when they’re sent out alone. How, for example, will it deal with vandals and thieves, or some mischief maker who wants to see what happens when you throw a blanket over it? Some of us, after all, remember what happened to poor ol’ HitchBot.

Facebook
Twitter
Pinterest
WhatsApp
Previous articleScribd deals give you a year of unlimited books, audiobooks, and magazines for only $80
Next articleAmazon’s Google Pixel 3 discount is the best unlocked smartphone deal today