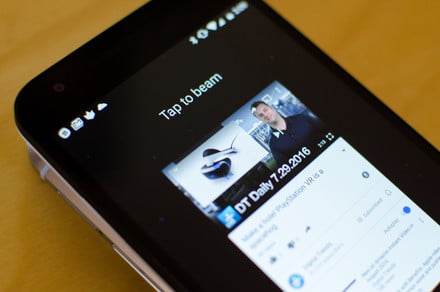 Three of the best known — and best-selling — Chinese smartphone makers are collaborating on a device-to-device file sharing feature similar to Android Beam. Xiaomi has announced the project, through its own MIUI Weibo account, and said it’s working together with both Vivo and Oppo. MIUI is Xiaomi’s Android-based user interface, which in China does not integrate Google services.

The system, which does not seem to have a name at this stage, will provide a high-speed connection between devices, where a variety of different file types can be transferred without using network data. It may end up being similar to Apple’s AirDrop feature, which uses Wi-Fi to send files after a connection has been established, while Android Beam uses NFC and Bluetooth. Xiaomi also says it welcomes other manufactures to join the partnership, with a view to creating a “more efficient” mobile experience for everyone.

Android Beam will be familiar to most people who have owned an Android phone recently, but the feature is on its way to Google’s feature-laden graveyard, as it will not be part of the upcoming Android Q update. Instead, Google is expected to introduce a new feature called Fast Share, which like AirDrop, uses Bluetooth and then Wi-Fi to connect to another device and send files quickly.

Why can’t Xiaomi and others in China use Fast Share when it arrives? It appears to be tied to Google Play Services, and therefore unable to operate on phones that don’t have access to the Play Store or Google’s suite of apps. While international versions of Xiaomi, Vivo, and Oppo phones do use Google services, the models sold in China do not.

It may not only be on phones made by these three that the new file-sharing feature appears. Xiaomi owns or invests in a variety of other manufacturers and brand names, including Redmi, Meitu, Poco, and Black Shark, so it may end up on future phones from these companies too. Oppo and Vivo are part of the BBK family, along with OnePlus and Realme, making an appearance on these possible too.

How about other companies? Apart from the names above, Meizu may not be having the best year, but it still sells phones in China and is a possible partner in the future. Huawei would be the prize, given its size, sales, and influence; but Huawei already has its own file transfer services — Huawei Share works between Huawei phones, and OneHop works between Huawei phones and laptops. Whether it sees value in joining the open project remains to be seen.

There is no indication of when Xiaomi, Oppo, and Vivo’s file-sharing feature will be available.