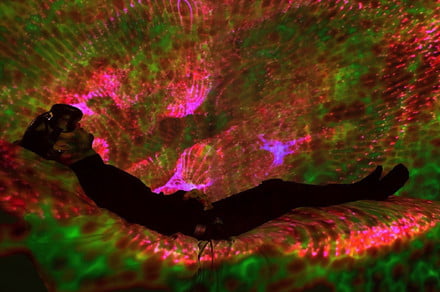 Ever find that you get into bed after a long day, but can’t get to sleep because your brain is buzzing about some incident or other? It’s an unfortunately common occurrence. Researchers in the Exertion Games Lab at Australia’s RMIT University have come up with an intriguing twist on this. Instead of a person’s brainwaves keeping them awake, they’ve been experimenting with ways to combine a person’s brain activity with virtual reality to create a kind of VR lullaby machine.

The idea, in essence, is to use technology to better relax people by visualizing their own brainwaves in a VR setting. These brainwaves are picked up using an electroencephalogram (EEG), which monitors electrical activity over the scalp. Each brain frequency is assigned a different color, while brainwave intensity is linked to movement. The result is that every person’s brain activity generates unique imagery in the form of a kind of VR screensaver designed to lull them into the land of nod.

“As long as you’re alive, your mind is active, even when sleeping,” Nathan Semertzidis, one of the researchers on the project, told Digital Trends. “We gave people a means to creatively express and explore their own mind by designing a system that listens in on different frequencies emitted by the brain’s electrical activity, and uses these frequencies to drive generative algorithms that dynamically convert the brain’s electrical activity into art. This provides a means to engage in creativity even while you are physically inactive, almost falling asleep. What was particularly interesting is that participants noted that while being engaged in this creative process it stopped their minds wandering to life stressors which would have otherwise hindered their ability to sleep.”

The work builds on research showing that good sleep is preceded by a set of very specific cognitive and mood states. It, therefore, tries to artificially prompt people to enter these states. Participants in a test of the technology reported a 21% drop in general negative emotion and 55% reduction in feelings of fear. General positive emotions, meanwhile, increased by 8%, while feelings of serenity rose 13%.

“In our study, we didn’t specifically assess the system’s ability to treat sleep-related pathologies; it was more an exploration of how brain-computer interface driven systems could benefit general sleep for non-clinical populations,” Semertzidis said. “However, given that the participants reported their thoughts being redirected away from life stressors, there is reason to hypothesize that similar brain-computer interface systems could be employed in the treatment on anxiety disorder-related insomnias, with further research.”