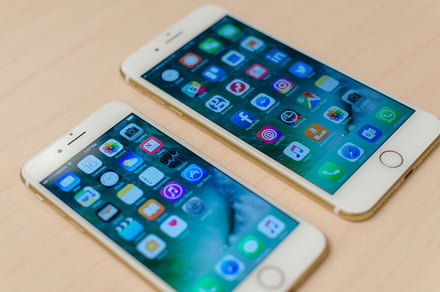 If you’re shopping for a new smartphone, but you’d prefer not to spend big on the very latest releases, then you should consider the bumper crop of affordable flagships from yesteryear. Tech moves fast, so there’s always an argument for buying something new, but many flagship phones from a year or two ago are still great devices that will meet most people’s needs and you can often pick them up heavily discounted. Here are our picks of a few older flagship phones that are still worth buying in 2019 and why we recommend them. We’ll also take a look at the pros and cons of choosing a new budget phone versus an older flagship.

If you’re an Apple person and you’re not keen on spending too much, then you should definitely consider an older model iPhone. Apple still sells the iPhone 7 and 7 Plus and, if your budget will stretch further, the iPhone 8 and 8 Plus. The main step down from the newer iPhones is the design. These older iPhones have the Touch ID home button and big bezels and they lack the Face ID camera, so they’re definitely starting to show their age in terms of looks. Reasons to go for the 8 or 8 Plus include the faster processor and wireless charging support, but there isn’t a great deal in it and their predecessors are both still solid phones that offer slick performance, great cameras, and decent battery life.

Apple is very good at continuing to update and support older devices; the iOS 12 update made it onto the iPhone 5S and every model thereafter. The oldest iPhone we’d recommend is the iPhone 6S, which lacks the water resistance of the iPhone 7 and has an older processor, but matches up in most other ways and is also the last iPhone that had a headphone port.

Samsung Galaxy S9 and S9 Plus or S8 and S8 Plus

For fans of Samsung’s Galaxy S range, the gradual refinement means that Samsung’s Galaxy S9 and S9 Plus, and even the S8 and S8 Plus, are still well worth considering. These older flagships still have gorgeous screens, modern curved glass designs, and enough processing power for most people. The S9 is a little faster, has a better fingerprint sensor placement on the back, and boasts a slightly improved camera, particularly for low-light photography, but there isn’t a big gap between the two generations. The big improvements in the S10 range are mostly to be found in the camera department, but they also pack a lot more processing power.

Samsung’s software update record isn’t the best. You can expect regular security updates, but it generally takes a few months after a new Android version is released for it to land on top Samsung phones and you’ll likely only get two. The Galaxy S7, for example, hasn’t been updated to Android 9.0 Pie and probably won’t be. That’s the top reason, but it’s not the only reason we don’t recommend going back as far as the S7 — it’s also starting to look decidedly dated and the processing power and camera are, at best, on a par with midrange phones today.

If you want a taste of Android as Google intended, then a Pixel phone is the way to go, but there’s still some mileage in the older Pixel 2 or 2 XL. Compared to the Pixel 3 or 3 XL you have slightly smaller screens and less processing power, but there isn’t a big gap. The excellent photography chops that made the Pixel 3 our pick for the best camera phone apply to the Pixel 2 as well. The streamlined interface and Google’s software know-how also ensure a slick feel to general performance. Even though the 2 XL looks a little dated, you may prefer it to the 3 XL because it doesn’t sport that ugly notch.

All of Google’s Pixel phones benefit from timely software updates. The original Pixel is a tougher sell, especially since the midrange Pixel 3a actually packs more processing power. You might even consider the Pixel 3a over the Pixel 2 if the price is right. The 3a has a bigger battery and a bigger screen, but the Pixel 2 has a faster processor, the dedicated Visual Core for image processing, and better water resistance.

If you look at the last few OnePlus releases, you’ll see that the OnePlus 6 hit something of a sweet spot. The OnePlus 7 Pro marked a real jump in price, the OnePlus 6T‘s in-display fingerprint sensor wasn’t quite right, but the OnePlus 6 offered a great screen, plenty of power, and a polished design that wasn’t too big, all at an affordable price. Sadly, it’s discontinued now, so it may be hard to find unless you’re willing to delve into the used phone market. But you can still buy the OnePlus 6T and it’s very much a modern flagship worth considering because it offers great value for money.

OnePlus does a good job of updating the software on its phones. If you can find them, the OnePlus 5T and the OnePlus 5 are still solid smartphones with plenty of processing power, good screens, fast charging, and decent cameras. The designs are a little dated and less distinct than the newer models, but these phones are still worth considering. We wouldn’t go any further back than that, though, because the 3T is inferior in almost every department.

The best small phones nowadays aren’t really all that small. Our favorite pocket-friendly line was Sony’s Compact, which packed the same powerful tech as its flagship model into a smaller form factor, but it looks as though the XZ2 Compact will be the last of its kind. The good news is that it’s still a good phone that offers strong performance, a capable camera, and decent battery life. Though we had some issues with the price and design of the XZ1 Compact when we first reviewed it, the deep discounts available now make it worth looking at for people seeking a smaller smartphone.

Sony is usually pretty good at updating software and both the Compacts have Android 9.o Pie and recent security updates. We definitely don’t recommend going back any further than the XZ1 Compact, though, as its predecessor, the X Compact, had a midrange processor, which is outdated now.

Though we were initially disappointed in the LG G7 ThinQ, the falling price has made it increasingly attractive. The design doesn’t stand out, but this phone boasts snappy performance, has a big, bright screen, and offers great audio quality. There’s also a versatile camera and good battery life. The G8 ThinQ has a better display, a bigger battery, and a faster processor, but it’s much more expensive. If you can find a good discount, the LG V30 or LG V35 ThinQ are also worth a look.

LG has a mixed record when it comes to software updates, but the G7 ThinQ has received Android 9.0 Pie. Although we liked the trendsetting LG G6 when it first came out, we don’t recommend it anymore because the processor is aging.

You might prefer to pick up one of the best cheap phones from today, rather than something that was top of the line a year or more ago. There are pros and cons to this approach, so it depends on what you value most. Let’s dig into the argument a little, but bear in mind that we’re talking generally here, so there will be exceptions to some of what we’re about to say.

There’s a good chance that old flagships will beat new budget and midrange phones in several categories. They tend to have better screens with higher resolutions; they often have better camera suites; they may have features like water resistance and wireless charging which are still rare in cheaper phones. The regularity and speed of software updates depend on the manufacturer, but most manufacturers are much better at updating their flagship range, even older flagships, than they are at updating midrange or budget phones. Having said that, Nokia is a great example of a budget phone maker that updates swiftly.

It used to be that flagship phones always outshone cheaper devices in the design department, but trends are much quicker to filter down now. Even a budget phone like the Moto G7 has a curved glass body and a teardrop notch, which makes it look more modern than many flagships from two years ago. The midrange processors you’ll find in the latest crop of budget phones are pretty good, but flagships come with flagship processors, so it takes a while for them to hit parity. Most likely any flagship from the last two years will outperform a midrange or budget device today, but there’s a line there. Right now we’d draw it under the Snapdragon 835, which slightly outperforms something like today’s midrange 660, whereas the 660 will beat the previous top chip, the Snapdragon 820.

Where new midrange or budget phones tend to offer an advantage is in battery life, partly because of greater capacity and partly because of greater efficiency. You’ll get better customer support, in theory at least, with newer phones. Because storage and RAM have trended upwards quite dramatically, there’s also a good chance that recent midrange and even budget phones will have more storage and RAM than older flagships.