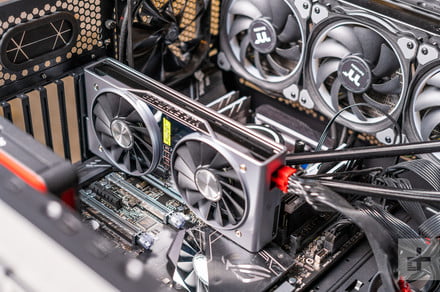 Nvidia’s RTX graphics cards might have new, stiff competition from AMD’s RX 5700 cards, but at the top end it still rules the roost when it comes to performance. With new Super cards replacing the dwindling stock of RTX 2070 and 2080 cards, it’s a great time to buy a new graphics card. But which should you pick?

Want a broader selection of GPUs? Here are the best graphics cards you can buy right now.

We’ve had our hands on almost every RTX graphics card since they released, including the latest of the Nvidia Turing refresh cards, the RTX 2080 Super. Before we look at how they perform in the real world, let’s take a look at the specifications, which paint a pretty clear picture of what we can expect from these cards.

Like the RTX 2070 Super and RTX 2060 Super before it, the RTX 2080 Super saw a modest increase in CUDA cores, along with a bump to its boost clock speed by more than 100MHz. But it also saw a jump in its memory speed, which helped push its overall bandwidth close to 500GBps. All of that does come at the cost of thermals and power draw though, with the RTX 2080 Super now rated at the same 250w as the 2080 Ti.

The 2070 Super still falls behind the stock 2080, although its improved boost clock and CUDA core count over the stock 2070 helps narrow that gap considerably. With the RTX 2060 Super so close in specifications to the stock 2070, there’s no wonder that Nvidia is retiring that original launch card.

As with all computer hardware, though, the specifications only tell us part of the story. When we got to grips with these new Turing GPUs in the real world, the performance of the 2080 Super, 2080, and 2070 Super are much closer than we’d have liked to have seen.

The 2080 Super is undeniably the most powerful card of the three, but the margins aren’t as wide as we expected. The fact that the 2080 Super is sold at $100 cheaper than the original 2080 is the only real saving grace for it. You get more power for less money, which is always a good deal. That is, except when the 2070 Super is so close in performance to the original 2080 and a full $200 less than the new Super variant.

The 2070 Super is arguably the best bang for buck card in the entire RTX lineup. It outperforms AMD’s RX 5700 XT, quite often defeats the $650 Radeon VII, and it can handle RTX features like ray tracing and deep learning super sampling (DLSS).

Along with bumps in clock speed and CUDA core count, Nvidia’s new Super cards also increased the number of the RT and Tensor cores which enable ray tracing and DLSS respectively, on its RTX GPUs. Although it wasn’t huge, the RTX 2070 Super saw an increase of 11 percent in RT cores and Tensor cores. While that won’t make it much easier to run the top-tier ray tracing effects, it should help diminish the performance impact ray tracing can have.

On the other hand, the RTX 2080 Super’s RT and Tensor core counts only increased by just over four percent. That’s negligible enough that we didn’t see any real improvement in ray tracing or DLSS performance. More is better in this case and it’s certainly an improvement over the stock 2080, but the gap between the 2070 Super and 2080 Super is considerably narrower on this front than it was between the 2070 and 2080, making the 2070 Super, again, more of an upgrade over its non-Super variant than the 2080 Super.

The 2070 Super is king, unless you have deep pockets

The RTX Super cards are all an improvement over their predecessors and unanimously represent better value for money because of it. That said, there are cards which represent greater upgrades than others and the RTX 2080 Super just isn’t one of them.

While the raw performance crown in this head to head goes to the RTX 2080 Super, the 2070 Super just offers much more value for money. If you can find an RTX 2080 at a lower price as retailers look to clear stock ahead of the 2080 Super’s proliferation, that might make it a worthwhile buy. But if you’re at all interested in bang for buck, save yourself $200 and grab a 2070 Super.