Home News Note 10 dummies give us our best look yet at Samsung’s controversial...
News 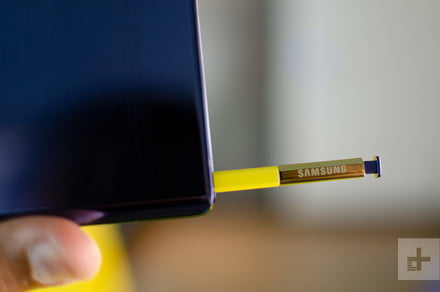 As sure as night follows day, so it seems the Samsung Galaxy Note 10 will follow the release of the Galaxy S10 range. But this year’s Note is looking to be a little different. Instead of being a single model, like previous years, the Note 10 range seems likely to be split into two models: The Note 10, and the Note 10 Pro. Now, we’ve been treated to what looks like our clearest look at the two new Note flagships. The images come from user Mikke on Slashleaks, and claim to show dummy units of both the Galaxy Note 10 and the Note 10 Pro.

The first trio of images show the two Note 10 phones from the front and the back. It’s clear there’s a large size difference between the two phones, and noted Samsung leaker Ice Universe has claimed the larger of the two is most likely to be the Note 10 Pro. This matches previous rumors that paint the Pro model as the larger and more powerful of the two. The black-on-black of the body on the display means there’s little to see on the front of the dummies, though you can just make out the centrally-placed single selfie camera lenses. This selfie lens is rumored to reside within a small hole-punch in the display, similar to the Galaxy S10.

The rear shots show more detail. Here you’ll see the large Samsung logo on both, as well as a triple-lens camera suite on both. The suspected Pro model also has two additional lenses below the single flash unit; these could potentially be small depth-sensing sensors to help boost the Note 10 Pro’s portrait photography. Contrary to rumors it would come with capacitive buttons, the Note 10 does seem to have physical buttons. Unsurprisingly, there’s no fingerprint sensor — expect it to be an ultrasonic in-display scanner instead.

Images of either end of the phone have more shocking surprises in store for fans. The top of the dummy phones houses little more than the SIM card tray. The bottom has a lot more to chew on though. There you’ll find the S Pen, a downward-firing speaker, and the USB-C port — but missing is the headphone jack. Samsung has been one of the few manufacturers to continue to pack the jack in recent flagship phones, and the removal of it could lead to a backlash from fans.

How likely is it these dummies represent the true face of the Note 10 range? The removal of the headphone jack, the two models, and camera suite certainly match the most recent rumors and leaks, and these images have been mentioned or retweeted by notable leakers, including the aforementioned Ice Universe and Steve H.McFly. While nothing is certain until Samsung chooses to take the wraps off itself, these dummies certainly match the prevailing winds of rumor. We’ll find out for sure on August 7.

We live in a digital age. Files can be streamed and shared, content is available on demand, pretty much anything you do on a mobile device is in the cloud. Life is smarter, more efficient, and technologically easier on nearly all fronts.One area that could be improved upon is in note-taking and handwritten content. While there are plenty of apps that allow for typing notes, drawing with a stylus, or sketching, nothing beats the old pen and paper approach.The SyncPen Smart Pen (2nd Generation) blends the analog world of writing and drawing with the digital one. In short, it turns everything written into a digital format, converting scribbled notes, sketches, and drawings into shareable files.Using a motion-tracking micro camera tucked inside the pen, it takes what you write on the included 10-inch LCD notepad, and then reproduces in the SyncPen app. From there you can treat just as you would any other digital file. Email, share for collaboration, save to the cloud, or edit.SyncPen FeaturesConverts hand-written notes & hand-drawn doodles and sketches into editable digital filesAllows capturing 360°angles of notes, not at a specific angleLDC writing pad enables paperless writing & can also be used in offline modeIdentifies 66 languages & imports handwriting into textSynchronously records your audio with the noteApp keeps & sorts your notes by word or dateConverts into a variety of format; from an MS Word document to a PDF or a JPGGet Yours!Available in blue or grey, the SyncPen Smart Pen and Notebook typically retail for $199, but with our current offer, you’ll get 25 percent off the price, putting it at just $149.99.Best SellersEarn Credits!For every $25 you spend in the AG Deals Store you get $1 credit added to your account. And, if you refer the deal via social media or an email that results in a purchase, you’ll earn $10 credit in your account.First Time Buying?If this is your first time buying, you are also eligible for 10% discount! Just be sure to subscribe for email updates.Free StuffNot looking to spend any money today? No worries. You can still visit the AndroidGuys section for freebies and pick something anyhow.
Read more

Looking around at the various wireless service providers, one might get the sense that there is an endless number of choices. But when we get down to it, many of them rely on the networks offered by three biggest carriers.Twigby, a Mobile Virtual Network Operator (MVNO), is one such carrier. Indeed, it has its own rate plans and features, but it uses cell towers from Sprint and Verizon.When it comes to buying a phone for use on Twigby there are a few options to consider. For starters, you can bring your current device to the carrier. Additionally, you can buy a universally unlocked phone for use on Twigby. Just ensure it has CDMA support. Customers can also purchase a phone directly from Twigby.While the handset selection is rather light, it’s a decent mix of entry-level and mid-range models. What follows are some of the best Android phones available at Twigby today. These aren’t the most powerful, but rather the best for particular needs.Google Pixel 3a XLAlthough it arrived in the middle of 2019, the phone is still more than adequate for a lot of users. It runs a clean and current version of Android and gets monthly security updates and bug fixes.In terms of hardware, the handset offers up a large 6-inch display and features one of the best point and shoot cameras on the market. Under the hood is a solid set of mid-range hardware even by today’s standards.Shop Google Pixel 3a XL at TwigbyMotorola Moto G FastPowered by a stock Android 10 software experience, Motorola’s phone has just the right extra custom touches. It’s pretty much left the way Google intended Android to be, but with a smattering of helpful extras.A large 6.4-inch screen stretches from edge to edge with the front-facing camera tucked in the hole-punch cutout. Around back is a multi-camera setup while a two-day battery sits inside the water-repellent body.Shop Motorola Moto G Fast at TwigbyLG Stylo 4 PlusIf you’re the kind of person who likes to jot down notes, sketch the occasional image, or mark up a document, this is the sort of phone you’ll appreciate.The phone sits a little lower on the totem pole in 2020 but still works well for a first-time user. Standout details include a big screen, decent battery, and 16-megapixel camera. We’re always fans of IP68 water and dust resistance, too.Shop LG Stylo 4 Plus at Twigby
Read more