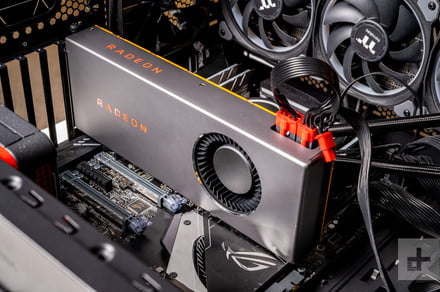 AMD’s new RDNA-based, Navi graphics cards are here in the form of the RX 5700 XT and RX 5700. These two cards are built on the same GPU core with hardware locks on stream processors and core clocks to keep one faster than the other. For the privilege of the XT’s higher performance and curiously dented cooler shroud, you have to pay a $50 premium. Is it worth it? To find out, we pitted the Radeon RX 5700 XT vs. RX 5700 in a one-on-one shootout.

For a look at how these cards measure up to Nvidia’s new Super cards, check out our original RX 5700 XT and 5700 review, and our head-to-head comparison with the Nvidia RTX 2060 Super.

The crux of this comparison was always going to be down to performance. The raw power of these two cards is their biggest differentiating factor, so the question is, is it worth spending an extra $50 for the added capabilities of the 5700 XT? Let’s take a look at the specifications first to get an idea of what we’re dealing with.

The first difference between these two cards is in their number of compute units. The 5700 XT has just over 10 percent more with 40, versus the 5700’s 36. That equates to the same difference in stream processors and should be a major component in the differentiating performance between the two cards.

Another major factor is the clock speed. The base clock is 150MHz higher on the 5700 XT and its “game clock,” the typical clock speed you can expect during sustained load, is 130MHz more. That’s not likely to have a huge impact on overall performance, but it all helps. The boost clock is much greater on the XT, but with the sub-par cooling on these cards, we don’t expect either to approach that speed for more than a fraction of a second near the beginning of a load.

Memory wise both cards are the same with identical configurations of GDDR6 and an identical resulting bandwidth. The 5700 XT has a sizeable uplift in TDP requirements, making it a greater candidate for aftermarket cooling, though could suggest there would be greater overclocking headroom on the 5700.

As for how this all affects real world performance, we turn to our suite of benchmarks that we conducted during our initial review of the two cards.

In gaming tests both cards prove to be very capable at both 1080p and 1440p, with more than playable frame rates (40-80FPS) at 4K in Fortnite, Battlefield 5, and Civilization VI. Across the board we see the RX 5700 perform within roughly 10 percent of the 5700 XT. In some cases, it’s even closer.

If you’re just looking for overall performance, the 5700 XT is clearly the better card, but if value for money is important to you and that extra $50 would be more useful elsewhere, the 5700 holds its own. That’s especially true at 1440p, where it manages well over 100 FPS in Civ VI and close to it in BF5 and Fortnite.

One of the biggest issues facing the RX 5700 XT and 5700 is that the reference blower coolers aren’t up to the task. Although there have been some who’ve found that new heatpaste and added washers can make quite a difference, the out of the box coolers on these cards aren’t great. They’re loud and they don’t cool the GPU well enough to prevent throttling, which is why we don’t see these cards hitting the boost clocks that AMD claims they’re capable of.

Because of that and some issues with launch drivers, overclocking on the 5700 XT and 5700 isn’t great at the moment. But it could be. With an RX 5700 XT on a custom watercooling loop with a 95% increase in power limit, IgorsLab overclocked it to more than 2.1GHz on the core. That results in a frame rate increase of just over 11 percent in Shadow of the Tomb Raider.

That’s quite an exciting prospect for tweakers and those considering buying a third-party 5700 XT with improved cooling when they launch in August.

The 5700, on the other hand, appears to have some sort of limiting factor beyond drivers and thermals. In a separate test, IgorsLab hit a wall at 1,800MHz on the core with a 20 percent increase in power limit. That may be a hard lock AMD has put in place to prevent the 5700 exceeding the performance of a stock 5700 XT. We’ll need to wait for more mature drivers to make sure that’s the case, but it may be something that can be circumvented with a BIOS flash.

The big takeaway from overclocking the RX 5700 series at the moment, is that it’s not great, but the potential is there. With better cooling and some further tweaking and testing, these cards may be great overclockers. If and when that time comes, the 5700 may be able to outperform a stock 5700 XT if its cooling holds up. But with much greater headroom, at least for now, the 5700 XT appears to be the better overclocker.

The AMD RX 5700 and 5700 XT are an exciting release from AMD. The first to use the new RDNA architecture, these cards show serious potential with better cooling and more mature drivers. Considering how hot and loud the reference cards get though, we would really recommend waiting for third-party cards before buying one of these. It’s not long to wait, and we’ll know a lot more about this generation’s true capabilities in August with those partner cards.

But if you must buy a new Radeon GPU to take advantage of FreeSync or want the best value of these two cards at this time, the 5700 is the better of the two. Its performance is better than its reduced price might suggest, and it will be less demanding on the limited cooling capacity offered by the reference blower design.

The 5700 XT is definitely more powerful and may have greater headroom if you plan to upgrade its cooling in the future, but for now, with overclocking in the state that it is, the 5700 gives you more for your money.