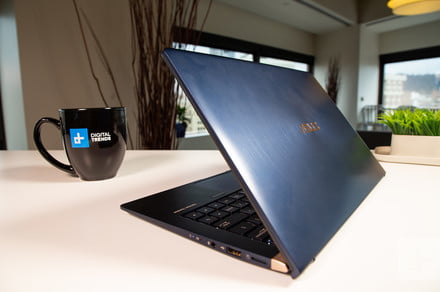 Let’s say you’re in the market for a 13-inch laptop, and you have more than $500 but less than $1,000 to spend. While you might salivate at premium laptops that are well past your ceiling, never fear — there are some great options in your price range that will give you most of what those premium laptops offer at a fraction of the price.

Our favorite in this price range is the Asus ZenBook 13 UX333. We hesitate to call it a “budget” laptop because it’s so darn good. But it’s not alone — Acer released a 13-inch laptop of its own at a similar price point, the Swift 3. Is the Acer good enough to take on the ZenBook 13?

In terms of aesthetics, there’s really no comparison. Asus’s latest member of its ZenBook 13 300-series inherits a high-end Royal Blue color scheme with striking gold trim and iconic ZenBook swirl on the lid from its more expensive siblings. The Swift 3 is far more conservative, essentially just another silver laptop in a sea that’s swimming with them. It’s not a bad look, but it can’t hold a candle to the ZenBook 13. And Asus fitted this reasonably-priced laptop with the same thin bezels as more expensive models, making it smaller and far more modern looking than the Swift 3.

Good looks isn’t all that the ZenBook 13 inherited. It’s also tested to MIL-STD-810g military standards for robustness. And it feels up to the task, with no bending or flexing in the lid, keyboard deck, or bottom of the chassis. The Swift 3 is reasonably durable, but again it falls short. As we mentioned, the ZenBook 13 is smaller thanks to its tiny bezels, and it’s also thinner at 0.55 inches compared to 0.63 inches and lighter at 2.7 pounds versus 2.87 pounds.

Getting data into a laptop is important, and the ZenBook 13 wins this round as well. First, it has an ErgoLift vent that props up a snappy and precise keyboard (with some funky key layout issues that you’ll have to get used to), and a Microsoft Precision touchpad that’s augmented by an LED inlay that provides a useful virtual numeric keypad. The Swift 3 doesn’t have any nifty technology in its equally snappy and precise keyboard and excellent touchpad, and so the Asus scores points for its extra design touches.

Both laptops provide a mix of legacy and future peripheral support. In fact, their connectivity is identical — a USB-A 3.0 port, a USB-A 2.0 port, a USB-C 3.1 Gen1 port, and a full-size HDMI port. Both have a microSD card slot, and both have 802.11ac Wi-Fi and Bluetooth 5.0.

The ZenBook 13 is both better-looking and better-built, and that virtual numeric keypad is great for entering a bunch of numbers.

The ZenBook 13 uses an 8th-generation Whiskey Lake quad-core CPU, the Core i5-8265U, which provides a great balance of efficiency and performance. It’s a great choice for anyone with typical productivity tasks. The Acer Swift 3 uses the Core i7-8550U, the previous version of the Intel 8th-gen chip that’s also a quad-core CPU. Typically, it’s faster than the Core i5, but in our testing, the ZenBook 13 actually kept up with the Swift 3. That makes these two laptops equally matched in terms of performance.

The ZenBook 13 does offer a variant with the Nvidia GeForce MX150, an entry-level GPU that can provide for some decent 1080p gaming as long as the graphical details are turned down. The Swift 3 is limited to Intel’s integrated graphics, and compared to our review unit with the same graphics was equally as fast (or slow) in gaming. Both laptops provided fast storage performance thanks to PCIe solid-state drives (SSDs).

Display quality an area where the ZenBook 13 took a strong lead. Asus chose a very good 13.3-inch IPS Full HD (1,920 x 1,080) panel with exceptional contrast at 1360:1, higher-than-average AdobeRGB colors at 77 percent, and good accuracy at 1.68. It’s a much better display than the more average screen in the Swift 3 that managed 680:1, 73 percent, and 2.84 in the same metrics. Subjectively, we enjoyed the ZenBook 13’s display experience a great deal more.

The ZenBook 13 is noticeably smaller than the Swift 3, and slightly thinner and lighter. But let’s face it: Neither of these laptops are a burden to carry around.

The ZenBook 13 lasts a lot longer on a charge, letting you leave your power adapter behind.

The ZenBook 13 wins all of our comparison sections, and it’s also very attractively priced to boot. Spending just $850 gives you a Core i5-8265U, 8GB of RAM, and a 256GB SSD, which is a great deal.

In the end, though, the ZenBook 13 simply offers a much more striking design, better durability, equal performance, a much better display, and better battery life. Whew! It’s a clear winner.