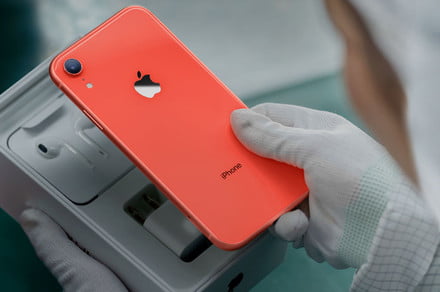 Considering Apple is making a $6,000 computer, you might not think it would worry about a price hike for the iPhone. But Foxconn, which manufactures many of Apple’s phones, says it could move production out of China if the U.S. puts more tariffs on the country as part of an escalating trade war.

“Twenty-five percent of our production capacity is outside of China, and we can help Apple respond to its needs in the U.S. market,” Foxconn semiconductor division chief Young Liu said during a recent investor briefing, Bloomberg reports.

Even if Apple moves iPhone manufacturing out of China, production costs could go up substantially — up to 30% — thanks to the complex supply lines that made it possible to build millions of iPhones in the first place.

It’s not just iPhones that are manufactured in China. The iPad, Apple Watch, and Macs all have components made there or are partially assembled in Chinese factories. Apple will feel the pinch from tariffs on all these products, which could affect the calculation on whether to pass on the cost to you.

“As we moved production to Asia over the past 20 years or so, all the supply chains moved as well,” said Rosemary Coates, executive director of the Reshoring Institute and president of Blue Silk Consulting. That’s especially true of China. “There’s a pretty fabulous integrated supply chain for almost any product you can imagine,” she told Digital Trends.

While most of these big global companies are able to shift production, “it doesn’t just happen with the snap of a finger,” said Coates. It requires retraining and hiring more workers, for one thing. The process of reestablishing a supply chain could take 12 to 18 months and comes with its own problems. “Almost no place can match the manufacturing might of China at the moment,” said Coates. Shipping from India can add two weeks, and the country doesn’t have the same infrastructure — deep-water ports, trains, eight-lane highways — as China.

All of that could increase Apple’s manufacturing costs by 30%, Coates said. That could push the price of the iPhone XS, which is currently $999, well over $1,000. Whether Apple would pass on the cost to buyers — which would likely decrease demand — or absorb the increase itself is unclear. Apple hasn’t commented on Foxconn’s statement.

The company — and Apple fans — might be facing price hikes no matter what happens thanks to the ongoing trade war. In May, President Donald Trump raised tariffs to 25 percent on $200 billion worth of Chinese goods. Then he threatened to do the same for an additional $300 billion in imports if China’s President, Xi Jinping, doesn’t attend the G-20 summit later this month in Japan.

“If the U.S. is ready to have equal consultations, our door is wide open,” said Geng Shuang, spokesman for China’s Ministry of Foreign Affairs. “But if it insists on escalating trade frictions, we will respond to it with resolution and perseverance.”

The tariffs could impact all kinds of products and is already affecting the price of washing machines. If the trade war drags on, the price of an iPhone could jump by up to $160 more, according to some analyst estimates.

Still, with uncertainty about tariffs and trade wars looming, Coates think manufacturers should diversity sooner rather than later. “They need a Plan B and a Plan C,” she said.”Even if they decide to stay in China, now is the time to develop alternative plans.”

“Longer-term, U.S. corporations could try to compensate by moving some production out of China,” tech entrepreneur Vaclav Vincalek told Digital Trends recently. “Some will come back to the U.S. However, some will go to other countries like Vietnam.” Foxconn announced in April its plans to start mass producing iPhones in India later this year.

The company also has plants in Brazil, Indonesia, Japan, Mexico, Vietnam, the Czech Republic, the U.S. and Australia among other countries, according to The Wall Street Journal. Exactly how and when Foxconn would shift production to its other plants — and how quickly they could move it — remains to be seen.