Home News The best travel chargers for your phone
News

The best travel chargers for your phone 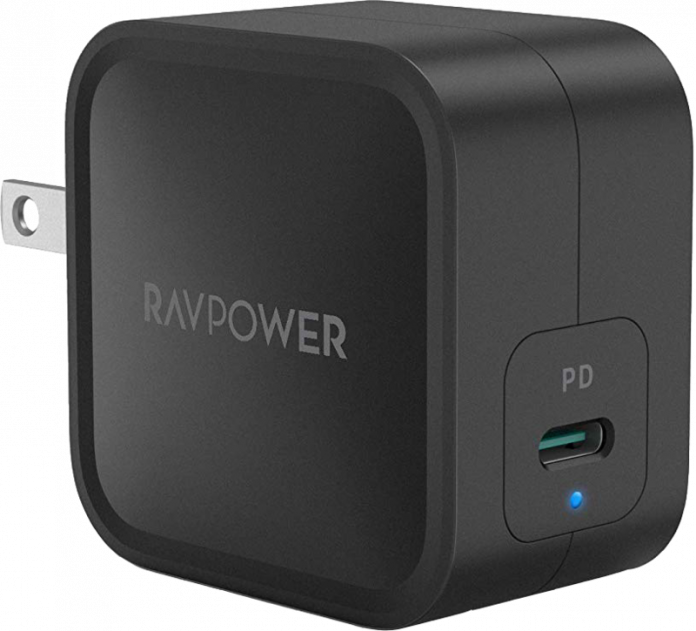 Keeping all of your gadgets charged can be one of the most stressful parts of traveling. Nobody wants to pack half a dozen charging bricks in their bag, and using the same chargers you keep around the house means undoing and redoing your home charging setup every time you go on a trip. Here are some travel-focused chargers that will make your life easier.

Charging bricks are getting more powerful

If all you need to power on your next trip is your phone or tablet, you can easily get by with a simple charging brick. While the one that comes with your device works just fine, the ones listed below offer higher output than what’s typically included with a phone, partially thanks to the advent of gallium nitride technology. 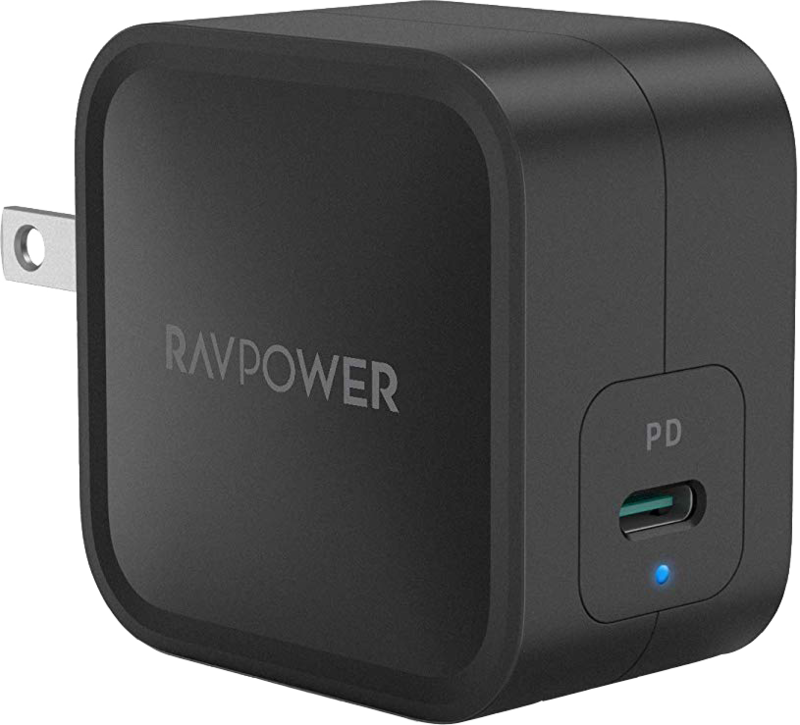 If you only need to charge a single device while you’re out, RAVPower’s gallium nitride brick is one of the smallest ways to push a whopping 61W of power over USB-PD 3.0. That’s enough to charge a phone, tablet, Nintendo Switch, or even most USB-C laptops with ease. The plug even folds into the brick for easy packing.

30W in a tiny package 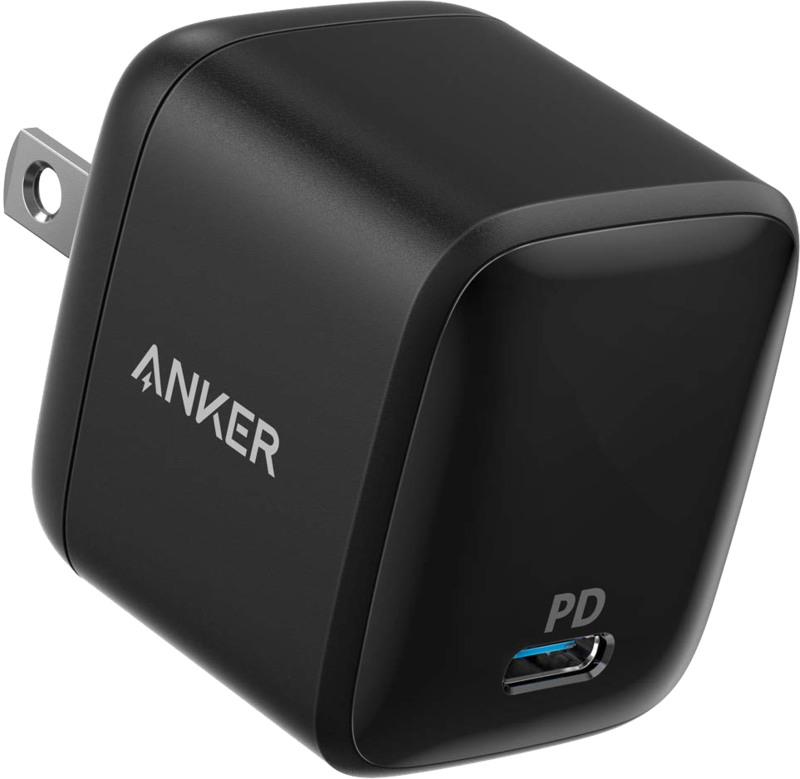 Gallium nitride is a breakthrough technology that allows for high output charging in significantly smaller chargers compared to silicon. The Power Port Atom is roughly the size of a regular phone charging brick but outputs up to 30W with USB Power Delivery. The plug doesn’t fold, but it’s small enough to still be easily packable. 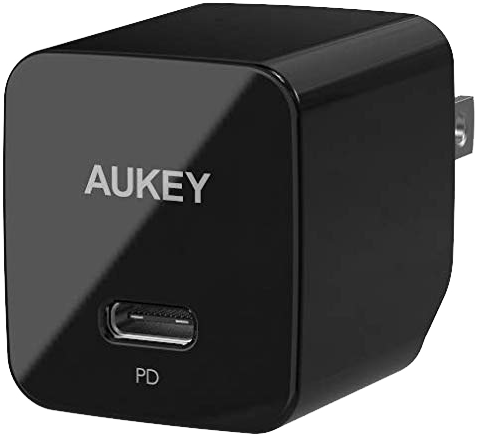 Aukey’s 18W PA-Y18 charger is an ultra-tiny brick that pushes 18W out to your phone through its USB-C port. It supports fast charging thanks to USB Power Delivery, and despite the small size, the plug still folds into the brick. Since it’s so small, you can plug multiple bricks into a power strip.

Multi-device chargers are perfect for travel

It’s easy to get lost in the seemingly infinite selection of chargers on Amazon, but the bricks listed above should be on your shortlist if you’re only looking to charge your phone while you’re out. Gallium nitride has allowed even tiny charging bricks to deliver loads of power, which is great news since batteries in phones are getting increasingly bigger and more power-hungry. The PowerPort Atom PD 2 is smaller than a MacBook charger and features two USB-C ports with Power Delivery for ultra-fast charging. You can charge a single device at up to 60W, or output 30W from each USB-C port, and the foldable plug keeps the charger compact. This GaN brick is perfect for charging a laptop and tablet at once — and of course, it’ll charge your phone just as well. The Satechi travel charger is the priciest of the bunch, but it’s a great-looking hub that charges up to four devices at once — including a USB-C laptop like a 13-inch MacBook Air or Pro, thanks to its support for USB Power Delivery. It also features two USB-A ports, both at 2.4A. Satechi’s charger supports a wide range of international voltage requirements and includes a long power cable. 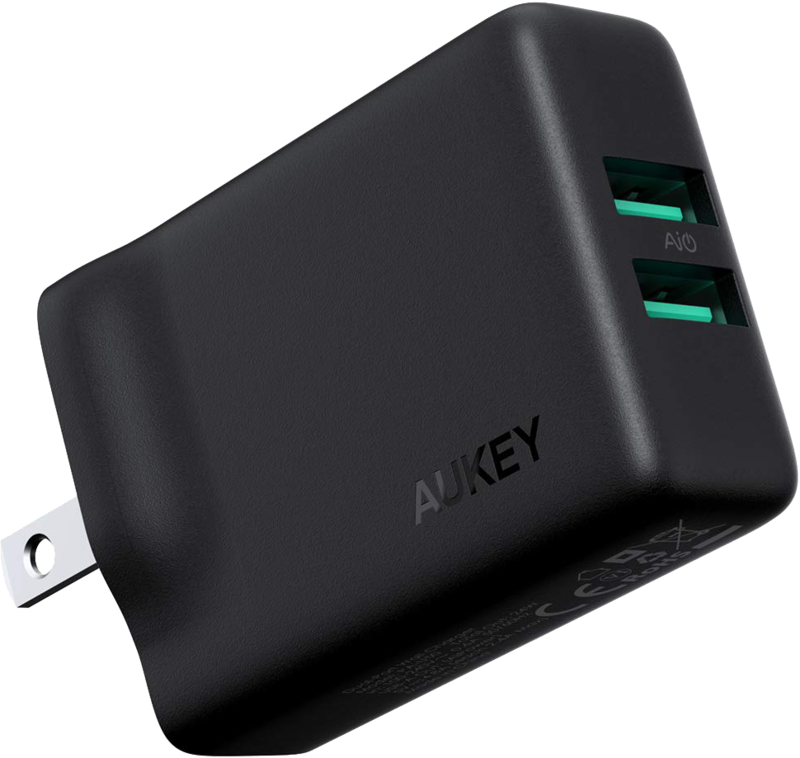 Aukey’s gallium nitride charger powers two devices at up to 4.8A over the more traditional USB Type-A at a considerably lower price. It’s slim enough to only occupy a single outlet on most power strips, and powers any 5V USB-powered devices. The Navitas GaNFast power chip keeps the charger from overheating while charging your phones or tablets. 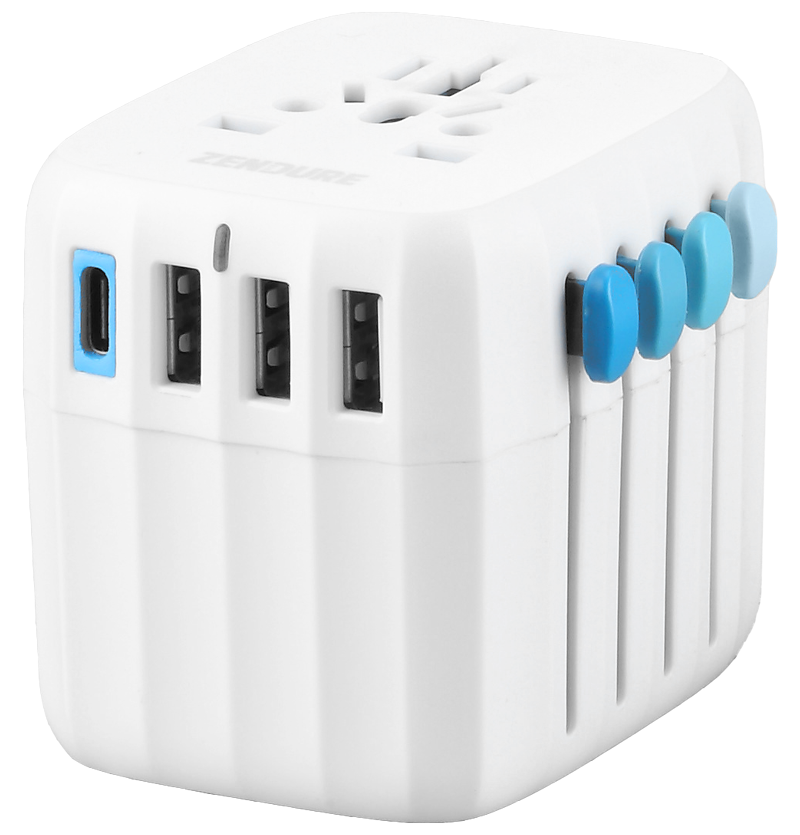 The Passport GO is a Kickstarter project that allows you to plug your chargers into virtually any outlet in the world. More importantly, though, it has three USB-A ports and a USB-C port built-in with 30W Power Delivery, thanks to gallium nitride technology. This means that depending on the power needs of your devices, you could leave your bulky chargers at home. 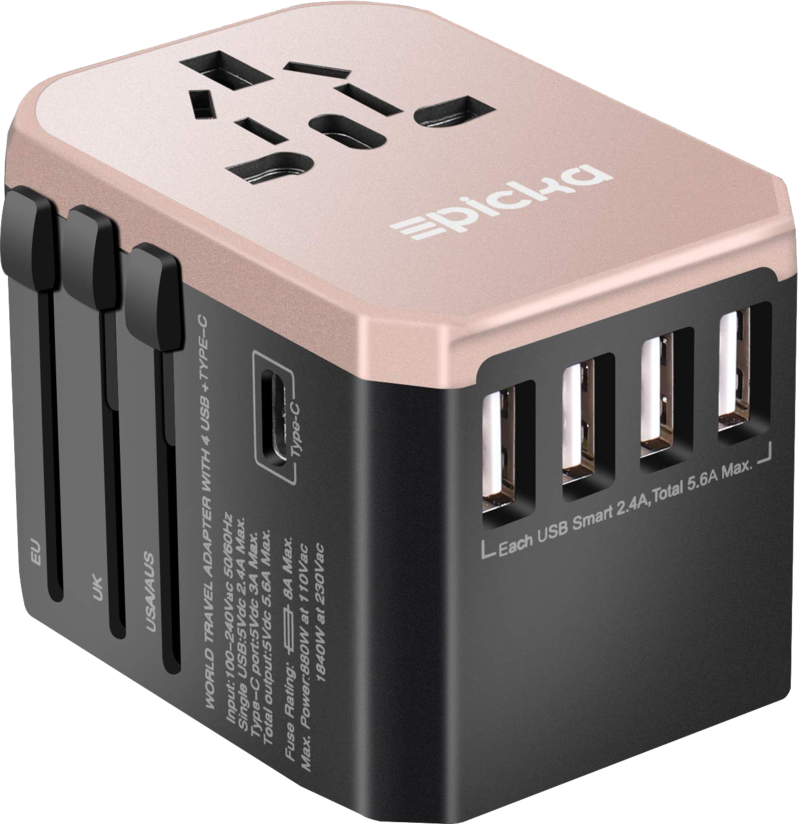 Epicka’s travel adapter doesn’t have gallium nitride tech inside, but it still boasts four USB-A ports, each with 2.4A output, along with a USB-C port on the side that’s capable of 3A charging. It’s available in several stylish colors, including rose gold (a personal favorite of mine), and supports standards for the EU, UK, U.S., and Australia. The Glamfields travel adapter has three USB-A ports rated at 2.4A and a 5V/3A USB-C port. It adapts for use in the EU, U.S., UK, and Australia, and has an auto-resetting permanent fuse that disconnects automatically when a high current is detected, preventing your chargers from getting fried. The AC port supports up to a whopping 1500W, meaning you’ll have absolutely no trouble charging your laptop late at night.

GaN has made it an amazing time to buy a charger

Gallium nitride has been a breakthrough technology when it comes to fitting high-output charging into a small, portable form factor. If you need proof, just look at the RAVPower Pioneer, a small charging brick with enough output to power most laptops. It’s a bit pricy for a single-port brick, but it’s a heck of a lot more compact than other similarly high output chargers — and if you still want a better deal, there are plenty of cheaper bricks with slightly lower output.

When you’re traveling with multiple devices, though, a single-port charging brick often isn’t enough, no matter how much output it offers. The portable multi-port chargers listed above are great for powering your laptop, tablet, phone, and accessories all at once; our pick is the Satechi 75W Dual Type-C Travel Charger, which looks sleek and charges four devices at the same time, including two USB-C ports with Power Delivery.

If you’re planning a trip to a foreign country, packing the right charger becomes a bit more involved. The plugs are often different from what you’re used to, and far too often the solution for many is to buy half a dozen region-specific adapters that convert your plugs into the appropriate shape without doing much else. That’s where travel adapters come in — we’re big fans of the Zendure Passport GO, which incorporates gallium nitride for higher output charging in the same small form factor, allowing you to charge a laptop at up to 30W without needing a dedicated power brick.