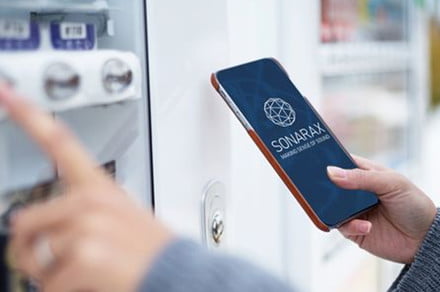 Imagine that your smartphone could talk directly to an ATM to securely authenticate your identity without you having to touch it. What if your phone could use sound from the speaker system in the mall to guide you directly to the specific store, or even the specific shelf in that store, that you’re looking for? Sonarax claims that its new ultrasonic communication protocol, which enables machine-to-machine connectivity is capable of all that and more.

“We have a communications protocol, like Wi-Fi or Bluetooth, but our protocol relies on sound waves,” Sonarax CEO Benny Saban told Digital Trends. “Any device that is equipped with either a microphone or a speaker can participate.”

There are many potential applications for this technology, which sends data as high-frequency sound beyond the threshold of human hearing.

Sonarax is already working with a couple of major financial institutions, where it’s focused on making the user experience at ATMs easier without compromising security. Employing the existing speakers in cash machines, Sonarax software allows secure pairing through your phone, so you can withdraw cash without having to touch the machine. The same secure pairing can be used to make payments at vending machines, physical points of sale, or even between phones. By speaking directly to each other, the devices circumvent the need to authenticate with a text message or another security measure.

The protocol can send encrypted data using sound waves, without having to record sound or have it analyzed remotely.

“This is a communications protocol that encodes on devices and decodes on devices,” Saban explained. “Nothing is sent to a server; privacy is maintained.”

Sonarax can also send data on open channels where it might be used to trigger location-specific advertising, such as an augmented reality overlay at an in-store display. But more exciting, and potentially useful, than that is its potential as a navigation aid.

While GPS is sufficient for outdoor navigation, where precision isn’t as important, we need better directions when we’re indoors. Deploying a beacon system can be expensive, difficult to calibrate, and the accuracy can still be disappointing. With Sonarax software, you can use an existing speaker system to map out an area. It’s a self-calibrating system which is easy to install and the frequencies it relies upon can be intertwined with another audio channel, so in-store speakers can continue to play muzak or announcements. There’s no special hardware requirement, you just need the right software.

“With sound, we can track not just location, but also how it behaves in movement which enables us to track your velocity and direction,” Saban said. “The phone itself is the sensor and every speaker is like a beacon.”

Sonarax claims positioning accuracy can go down to inches. It is also currently working on implementing its technology in a museum, so your phone can guide you to specific exhibits and trigger related information when you arrive at the right spot. It can even link up the location and data to related purchases from the museum store. It does all this using software on top of a regular multimedia system.

This technology could be used to guide to you to the sock stand or the cafe in the mall, but it could also work as a way to locate where you parked your car or even to find your child or a friend in a crowded building.

Great accuracy for indoor navigation is certainly an attractive prospect, but sound also offers other advantages to existing technologies that are based on radio waves. For a start, it poses no interference threat, making it suitable for hospitals and airplanes. It also doesn’t emit any electromagnetic pollution, which is a growing concern for some people.

There are obviously limitations to sound in terms of bandwidth and it travels relatively slowly. Sonarax is currently working on increasing the amount of data that can be sent and Saban expects to increase the limit from 1 kilobit per second to 4 kilobits per second by the end of the year. As for interference, he claims that the technology works in noisy environments, whether it’s an airport with a plane taking off in the background, or an echo-filled train station hall.

“Anywhere sound travels we will make it work,” he says.

As a software company, Sonarax is looking to license the technology and integrate it into products and systems. Audio giant Knowles has been working with the firm to integrate the algorithm at the hardware level. Sonarax has also been working Cadence. It is currently seeking more business partners and offers SDKs (software development kits) for Android, iOS, Windows, Java, Linux, and many other platforms.

With a couple of major demonstrations on the horizon, including one at the notorious Toronto PATH, which offers 30 kilometers of underground shopping, services, and entertainment, Sonarax is ready to show off what ultrasonic sound can do for indoor navigation. We’ll keep you posted on the results.

When you spend eight hours a day at your desk, it's easy to slouch a little. The problem is, that
Read more
News

Raise your hand if you’ve ever completed a Rubik’s Cube. Yeah, there aren’t too many of us out there who can do it, much less in a timely manner.On the other end of the spectrum are people who compete to see who can complete one in the quickest time possible. We’re talking a matter of seconds.If you’ve ever asked someone to help you figure out how to solve the twisty-turny colorful square, you probably found yourself confused by what should be a few simple rules. Once you get it, you get it, but until then, it can be maddening.The GoCube ($99) is smart version of the popular cube that pairs to your phone. And while it can walk you through the process of solving it, there’s more at play. After its popular Indiegogo crowdfunding campaign saw it raise more than $1.1 million dollars, it’s available for the masses.We’ve had one of these in the office for a few weeks, picking it up, playing with it, and trying to get better at solving the puzzle. While we’ve gotten better, we’re nowhere ready to compete against friends or family.The first impression of the cube was that it was buttery smooth and easy to articulate. There was no ratchet-y plastic sound of the gears in the Rubik’s Cube. This was quiet stuff that moved quickly and easily.Paired with your phone over Bluetooth, the GoCube’s sensors are able to show you exactly what each color and square looks like. Even as you flip the cube over in your hand you can see it moving in real time on your phone. And as easy as tapping a button you’ll have a literal turn-by-turn walk through of steps to solve.If you’re already adept at completing a cube you’ll find it can time and encourage you to get better. The app makes a game out of learning how to master the GoCube and there are plenty of fun challenges to keep things fresh. Players can even play against others whether in-person or globally.You wouldn’t know it from feeling the GoCube but there’s a battery tucked inside with the six-axis sensors. Moreover, the app provides the remaining battery level in the corner.Charging is done by a proprietary plug that can snap directly into a particular square; the other end simply requires a USB port. Included in the box are a base and a dock that can hold your cube. If you like to show it off, or keep it on the desk, you’ll appreciate the ease in which you can charge.We’ve enjoyed our time with the cube and have gotten better. Admittedly, we’re still to reliant on watching the phone tell us the steps instead of us learning the algorithms and ways to see it on the cube itself. Fortunately, there are plenty of steps and games left to help.With a road trip coming up and two teenagers in the car we’re definitely packing the GoCube. That is, of course, provided we’re able to find it in time. For some reason, it has grown legs and began traveling between family members and friends.In all seriousness, we appreciate the GoCube and think it’s a really cool toy or gadget. And while it does lend itself to fans of the original Rubik’s Cube and the speed cubing community, the app widens the demographic. It’s one of those “fun for all ages” sort of things.Learn more about the GoCube at Particula’s website where the unit appears to be on sale. For a limited time you can purchase the GoCube for just $79.95. You can also find it at Amazon where it’s also listed for the same price.
Read more