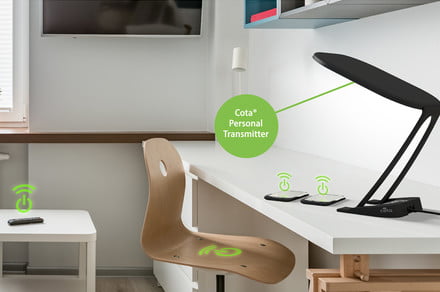 Ossia has finally managed to win Federal Communications Commission (FCC) certification for its Cota technology which can transmit power over-the-air that can be received by devices at a distance. That means Ossia can now market and sell its Cota Transmitter and Receiver in the U.S. for the first time.

“This certification is a meaningful step towards achieving our vision of powering the future through Cota Real Wireless Power,” explained Ossia CEO, Mario Obeidat, in a press release. “Not only does it validate the safety and effectiveness of delivering wireless power at a distance, it paves the way for the enablement of billions of devices and sensors in the future that cannot be wired or supplied by batteries.”

This is exciting news, but there are some limitations. This initial certification covers a 2.4GHz Cota system capable of delivering 1 watt of received power at a distance of up to 1 meter.

We’ve been following the slow development of wireless power over distance for years now and we’ve seen several demonstrations, including an Ossia demo where its transmitter was used to charge a Samsung Galaxy smartphone from across the room. While technology like Ossia’s Cota system works, and is actually capable of delivering multiple watts of power at up to 3 meters, and lesser amounts at up to 10 meters, the real challenge is doing so safely.

Ossia has met the FCC’s stringent rules on Specific Absorption Rate (SAR) requirements for safety. These SAR limits are supposed to dictate safe levels of radio frequency energy that can be absorbed by the body without causing health problems. The Cota system is deemed safe for people, without the need for a motion detector or an exclusion zone, because the receiver sends out a signal that establishes a clear path from the transmitter before any power is sent. This ensures that power is never transmitted straight at a person and also means it doesn’t require direct line of sight, as signals can be bounced off walls and ceilings.

The FCC has approved Ossia’s Cota system under Parts 18 and 15 of its regulations, but one of the reasons for the glacial pace of approval here is that the regulations were never designed with wireless power in mind. Other companies, including Energous and Powercast have also won FCC approval, but the power levels are extremely low, way below what you’d need to charge a smartphone or even a smartwatch.

“The first devices will be installed in commercial, industrial and other non-residential environments,” Obeidat told Digital Trends in an email. “Real-world applications could include IoT sensors, industrial sensors, multi-purpose alarms, and smart lighting.”

Another issue with wireless power over distance is the efficiency. The vast majority of the power you transmit is lost before it reaches the receiver. While we’re used to putting our smartphones on wireless charging pads, the Qi wireless charging standard has managed to reach efficiency levels of around 75%. Currently, most wireless power over distance technology is at around 10% efficiency, meaning 90% of the power transmitted is lost. No doubt that efficiency can be improved with time and research, but it’s an obvious barrier to adoption right now.

Ossia and most of the other players in this industry are still bullish about the potential. We met with the company at CES earlier this year to hear about its partnership with Spigen, one of the biggest phone case manufacturers around. Spigen hopes to develop and sell a transmitter and case bundle that would allow you to charge your iPhone or Android smartphone at a distance in the home. At the time Ossia was hopeful that the partnership might bear fruit by 2020, but that looks very ambitious.

While this FCC certification certainly advances the state of wireless power, where the technology seems to make the most sense right now is for things like sensors, lights, and alarms where inefficient batteries are currently used and changing them is a tricky maintenance task. Whether we’ll reach the position where a wireless power transmitter sits alongside your Wi-Fi router at home and powers lights, remote controls, wearables, phones, and other devices remains to be seen, but that’s certainly where Ossia is aiming.

“Much like how Wi-Fi is ubiquitous today, we envision that Cota wireless power will positively impact billions of lives around the world as a critical enabler of existing and emerging technologies, including 5G and the Internet of Things,” says Obeidat. “This certification is a major first step toward that future.”