If graphics cards don’t need it, what’s the point of PCIExpress 4? 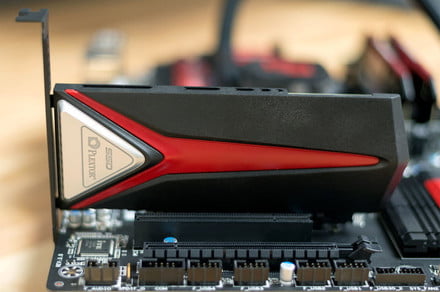 PCIe 4 is finally here. AMD’s upcoming Ryzen 3000 generation of CPUs are backwards compatible with most first and second-generation, 300 and 400 series motherboards. But the 500 series, and more specifically the X570 chipset, introduces some exciting features, including support for PCIe 4.0. But considering graphics cards of today don’t even max out PCIE 3.0, and many of AMD’s flagship X470 motherboards from 2018 actually ran PCIE 2.0, is there really much point to the new standard?

The answer is actually, yes. Despite mainstream graphics cards not needing anything close to the full (almost) 32GBps of unidirectional bandwidth that PCIe 4.0 x16 ports offer, there are some very real benefits to the new standard and they could make upgrading to the new 500 series motherboards worthwhile for AMD fans. And even Intel ones. Especially if the projected performance for Ryzen 3000 is anything to go by.

When it comes to PCIe lanes, graphics cards are the most hungry for them. The top-tier GPUs like Nvidia RTX 2080 Ti and AMD’s Radeon VII require masses of bandwidth to pump out the high frame rates and details that they’re capable of. But even these cards don’t need what PCIE 3.0 x16 slots offer. So, why is PCIE 4.0 a benefit? Because it means that gamers won’t need to run their fastest graphics cards in the fastest configuration.

A 2080 Ti pushes the limits of what a PCIe 3.0 x8 port will allow, just – TechPowerUp’s testing proves that. So, on a board with PCIe 3.0, running it in an x16 configuration makes the most sense. But that means the graphics card alone is hogging the all 16 lanes of PCIe. On an AMD Ryzen CPU, be it first, second, or third-generation, there are only 24 lanes to go around. Four of those are set aside for PCIe and SATA drives, four more provide the link with the chipset (which has a number of lanes of its own and shares them between storage drives and USB ports), and 16 dedicated for graphics cards.

Intel CPUs do things a little differently, but has the same 16 lanes for the GPU(s) they’re paired with. To get any more than that, you’d need to look to HEDT systems like Intel’s Core i9 X and XE CPUs, and AMD’s Threadripper chips (they aren’t dead, no matter what you hear), which have 44 and 64 lanes, respectively.

With PCIe 4.0, however, there’s no need to run a graphics card with the full 16 lanes, because x8 mode will give more than enough for even a 2080 Ti. That means unlocking an extra eight lanes (or more in the case of lower-power GPUs) that can be used for a variety of additional purposes.

What can we do with more lanes?

The obvious answer might seem like more graphics cards! But multi-GPU support in 2019 is limited at best, with both AMD and Nvidia having moved on from their respective multi-card technologies, with few game developers really taking advantage.

We could see those lanes leveraged by more niche use cases, like multi-GPU cryptocurrency mining rigs, but we don’t expect many outside of benchmarkers and heavy-overclockers to really leverage multiple graphics cards any more with PCIe 4.0 than they do now.

Gigabyte even demonstrated four 2TB M.2 SSDs on a single card with maximum read and write speeds in excess of 15GBps.

More likely and more useful, is that those lanes could be used for a variety of add-in cards. If you want the fastest storage possible, PCIe 4.0 NVME drives are at the forefront and some have already been announced with sustained read/write speeds as high as five GB/s. That’s 10 times the speed of your average SATA III SSD.

While those kinds of speeds aren’t going to deliver much in the way of a reduction in game load times or Windows boot times over today’s fastest PCIE SSDs, or even much beyond SATA SSDs, for those dealing with large amounts of data or regularly performing big file transfers, that massive storage throughput could come in handy.

With less of a reliance on chipset PCIExpress lanes, PCIe 4 enabled home RAID setups of multiple high-speed NVMe drives for even more sustained read/write headroom, are perfectly viable too. Gigabyte even demonstrated this as Computex with four 2TB M.2 SSDs on a single card with maximum read and write speeds in excess of 15GBps.

It needed its own cooling fan and shroud, like a miniature GPU, but what’s another fan when it comes to extreme storage performance?

Faster networking is also a more viable option with PCIe 4.0. 10-gigabit Ethernet could be possible on just one dedicated lane, making it far more accessible for the average person. Additional USB or Thunderbolt 3 ports could also benefit from those free lanes, allowing for more accessories and peripherals.

Those Thunderbolt 3 ports could come in extra handy in the laptop space. With additional bandwidth and dedicated lanes that don’t have to rely on the chipset’s more limited connection to the CPU, we could see external graphics cards compete directly with onboard GPUs for the first time. That would make external enclosures like Razer’s Core X Chroma, a real alternative for laptop owners who want gaming power at home and a more portable, longer battery-life device during their work day.

It’s also possible that games built for new-gen consoles like could take advantage of faster storage drives on PC too.

Outside of home PC users, data centers, and supercomputers could see real benefit from PCIe 4.0 too. All of that additional bandwidth could enable larger arrays of GPUs for high-end rendering tasks and number crunching on an extreme level. Those looking to run a large number of displays on a single system too, could see a benefit.

So, is it worth upgrading for?

As is usual with the bleeding edge technologies in the PC space, PCIe 4.0 is not going to transform your home PC experience in any meaningful way right away. If you’re an everyday gamer, or even one running some of the most powerful hardware in the world, you aren’t going to see a big difference in your FPS because of PCIe 4.0 alone.

It does open up the ability to better utilize multiple graphics cards and even faster NVMe drives, but neither of those are that important for most people right now.

That will likely change in the future, though, as new generations of graphics cards pushing the bandwidth boundaries of what PCIe 3.0 can do. It’s also possible that games built for new-gen consoles like Sony’s PS5 with near-non-existent load times, could take advantage of faster storage drives on PC too. At that point it will be within the interest of gamers wanting to make the most of their hardware to upgrade. But we’re not there yet. Not even close, really.

PCIe 4.0 is a neat addition to the Ryzen 3000 platform that AMD will launch in July 2019 and is something it can hold over Intel as a feature that is exclusive to AMD systems for now. Those who can take advantage of those additional lanes and bandwidth will find some benefit to it, but for everyone else, PCIe 4.0 doesn’t do much on its own that will really be felt for the time being.

That said, AMD received massive support from motherboard partners with Ryzen 3000 and the 500-series is likely to be fully featured and offer the greatest overclocking potential for the new CPUs. It’s not going to be necessary to upgrade to – AMD is sticking firm on its promise of multi-generational support for motherboards using the AM4 socket. But there will be some benefits, PCIe 4.0 included, that make it an intriguing option for those looking to make the most of their new CPU.