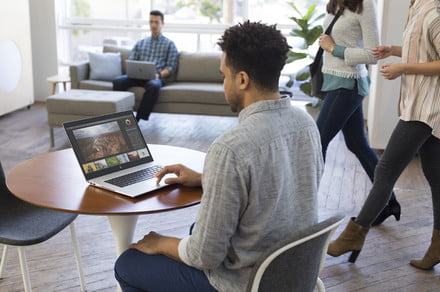 “Even the neatest of the neat freaks can feel disorganized” when they’re trying to get work done on their PC, so says Dropbox.

In a bid to help you better handle “work about work,” the company has just unveiled a new desktop app that creates a single workspace for organizing your content, connecting your various tools, and collaborating with others. In other words, the aim is to eliminate the need to endlessly hop between different apps to locate files and communicate with team members in order to get your work done.

The update is the most significant one ever taken by Dropbox as it continues to move away from its original core service as a place to store and share files in the cloud.

The company has been working on the new interface for a while now, with the fruits of its labor shown off in a video (above) posted online on Tuesday.

The update sees Dropbox integrating more tools into its app, including communication and collaboration service Slack, so you can now start Slack chats and share content via Slack all from within Dropbox. Video conferencing service Zoom is also integrated, allowing you to add and join Zoom meetings, while at the same time sharing files from your Dropbox account with others in the conference.

In addition, the redesigned service lets you create and store shortcuts to any website alongside your content in Dropbox, enabling you to keep content from online project management and productivity tools together with other work in Dropbox, the company said in a post, while a single search box now lets you hunt down important files and documents across all of your content, saving you time in the process.

Dropbox said it has transformed shared folders into “rich workspaces,” giving members the ability to pin key content to the top of a workspace and also “@mention” others and assign to-dos so that everyone is on the same page regarding task responsibility. You can also share feedback more easily, with the ability to leave comments alongside your content, across desktop, web, and mobile.

Dropbox users can opt in to the new desktop app via the early access program where they’ll find the new features added gradually over the coming weeks.

More than 500 million people — including 400,000 business teams — are now using Dropbox, with around 13 million paying for the service. Now it hopes its efforts to create a virtual workspace for its army of business users will help spur growth in the face of tough competition from the likes of Google and Microsoft.