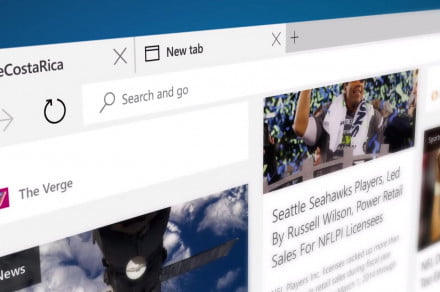 Microsoft claims that more than 60 percent of businesses rely on multiple browsers as part of their workflow. By being able to access Internet Explorer simply by launching a new Edge tab will definitely help simplify things. And to help users manage their workflow better and avoid a clutter of opened windows, Microsoft announced a new Collections feature for Edge. Collections will help users collect and organize content more efficiently, Microsoft said, and the feature also integrates with Office.

In a demo during the keynote, Microsoft showed how Collections works by allowing you to quickly store text, photos, and images from across the web. A panel, which slides opens from the right side of your Edge browser, displays all your Collections. You can create a new Collection, or add to a current one by selecting what you want from Edge and dragging it into the panel. When you’re done, you can share your Collection by sending it as an email or exporting it to a Word document, where appropriate web citations and links are included at the end of the page for quick reference.

In addition to being able to launch Internet Explorer in a new Edge tab, Microsoft also announced at its Build developer conference this year that the new Edge browser will support new privacy controls. When you surf the internet, you can choose between Unrestricted, Balanced, and Strict modes. Based on the choice you select, Edge will automatically adjust the settings to restrict how third parties and websites can track you across the internet.

With recent scandals affecting large technology firms, such as the highly publicized Facebook incident involving Cambridge Analytica, there has been a renewed interest in privacy and data security recently. Apple, for example, is positioning itself as a consumer-focused company dedicated to protecting your privacy in its recent ads. As part of Apple’s new initiative, it also announced a more secure version of its Safari browser on iOS and MacOS last year designed to prevent cross-site tracking. On MacOS Mojave, Safari limits fingerprinting by websites by using a simplified version of your system configuration. By doing this, your Mac would essentially look like everyone else’s Mac, and this helps prevent websites from being able to uniquely identify your device.

Microsoft’s privacy-centric Edge features are likely developed to better compete against Safari. Microsoft claims that the new features will roll out “near the broader launch of the next version of Edge,” though a specific date was not stated.

Updated May 6 with more details on Collections.