Home News Chang’e 4 mission may have found minerals from beneath the surface of...
News 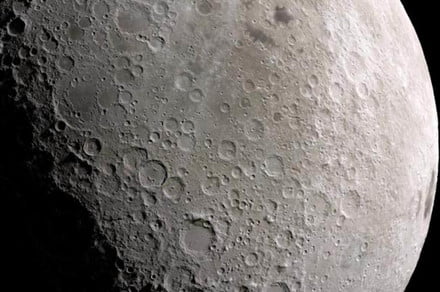 China’s Chang’e 4 mission has been exploring the far side of the moon since it landed at the start of the year, and has already made discoveries about the temperature on the moon and sent back images of the moon’s lesser-explored regions. Now it has made a major discovery: pieces of rock that could be from beneath the surface of the moon.

The Chang’e 4’s lander, called Yutu-2, was searching for minerals around its landing site in the Von Kármán crater when it spotted two unexpected mineral types. These minerals aren’t generally found in the crust of the moon, so scientists believe they may be from the moon’s upper mantle, the layer beneath the surface rock. According to data from the lander’s spectrometer, the material looked like it contained low-calcium pyroxene and olivine, which match what is believed to exist in the mantle.

If the lander has indeed located mantle rock, this could be an invaluable source of information about the moon’s interior and could give clues to how the moon formed and why it developed in the way that it did.

“If this really is a bit of the mantle, then that is so cool,” Sara Russell, a professor of planetary sciences at the Natural History Museum in London, said to National Geographic. It would represent a “critical piece of the jigsaw” to understand the geology of the mantle, about which little is known.

As the vast majority of missions to the moon have focused on its nearer side, the far side of the moon remains largely unexplored. The Von Kármán crater is a solid potential site to find mantle rock as it is part of a huge and ancient crater called the South Pole-Aitken basin, which is an ancient impact crater 1550 miles wide. “If you’re going to find mantle material anywhere, the South Pole-Aitken basin is the best place to go,” Russell said.

However, it is not yet certain whether the samples observed by the Chang’e 4 mission are actually mantle rock. It could be that the material is left over from the initial impact which created the basin, or it could be a type of solidified lava. In order to determine the nature of the material, more readings from the Chang’e 4’s spectrometer will be needed.

The study is published in Nature.

I find that people are often surprised at just how flexible Chromebooks are as work or entertainment devices. Many of
Read more
News