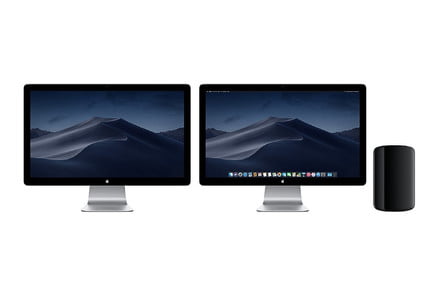 An image, rumored to be of Apple’s upcoming Mac Pro, was leaked this week. However, specific design details included in the image seem to prove the unreliability of the picture.

According to Apple Insider, the leaked image was released via Imgur and appears to be “an internal slide from a presentation for the “Mac Pro 7.1” has seemingly been photographed on a display and then shared.”

The internal slide included a simple illustration for the overall design of the forthcoming Mac Pro as well as a somewhat lengthy list of specs expected to be included in the Mac Pro. Also, the slide includes a red and white “APPLE INTERNAL” label in the top right corner, the Apple logo in the bottom right corner, and a last modified date of November 7, 2018. The name of the author (of the slide) was blurred out in the image as well.

However, as Apple Insider notes, the validity of the image is questionable considering the list of specs contains details that seem dubious at best. The questionable specs include a DDR5 SO-DIMM memory, support for Thunderbolt 4, and three double-wide PCIe4 slots.

The DDR5 SO-DIMM memory claim is questionable on two fronts: In general, the DDR5 hasn’t been commercially released yet, nor is it expected to until 2020. Also, the SO-DIMM version of the DDR5 apparently hasn’t even been formally announced yet. Support for Thunderbolt 4 also sounds a bit odd because according to Apple Insider, it too hasn’t even been announced yet. And the inclusion of three double-wide PCIe4 slots was also deemed strange considering “a lack of available cards that will be able to use it.”

While it’s understandable that Apple enthusiasts would be excited for a newly designed Mac Pro, especially for one that is expected to be modular, it’s worth reminding you that leaked images of forthcoming Apple products should be taken with a grain of salt. That said, Apple fans don’t have to wait too long to see what it’s in store for the latest Mac Pro as the new device is expected to be unveiled in June at Apple’s annual Worldwide Developers Conference.


Facebook
Twitter
Pinterest
WhatsApp
Previous articleOnePlus Bullets Wireless 2.0 hands-on review
Next articleVolkswagen is launching a full range of EVs, but it doesn’t want to be Tesla