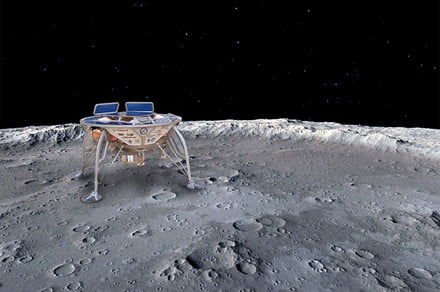 An amazing achievement for a tiny spacecraft from Israel: the Beresheet lander has entered orbit around the moon, making Israel just the seventh nation to do so.

The Beresheet lander, a washing machine-sized craft created by Israeli non-profit SpaceIL, has been traveling in increasingly large circles around Earth for the past six weeks since its launch in February. Each time the craft came back around to approach close to Earth after an approximately 19 hour revolution, it gained velocity and sped away from the planet. Each time the rocket would fire its engine to push its speed even higher.

Finally, this week it traveled far enough from Earth with an orbit of 400,000 kilometers (250,000 miles) to be captured by the moon’s gravity and to be pulled into orbit. In order to stay close to the moon and not shoot off into space, the craft had to be slowed in a procedure called the lunar capture maneuver. The craft slowed after it passed the moon for the first time, allowing the moon’s gravity to pull it into orbit.

The dramatic lunar capture maneuver was the linchpin of the entire operation, occurring at 14:18 GMT (10:18 a.m. ET) on Thursday, April 4. The probe’s velocity was successfully slowed by 324 meters per second and the craft entered orbit around the moon.

“The lunar capture is an historic event in and of itself — but it also joins Israel in a seven-nation club that has entered the moon’s orbit,” Morris Kahn, the founder of SpaceIL, said in a statement. “A week from today, we’ll make more history by landing on the moon, joining three superpowers who have done so. Today I am proud to be an Israeli.”

This is the also the first time that a privately funded spacecraft has entered orbit around the moon. As Kahn alluded to, the next challenge for Beresheet will be a historic landing on the moon next week.

The lander will complete several elliptical orbits around the moon before performing “Lunar Orbit Insertion maneuver #2,” when commands from Earth will instruct it to begin the landing process. It aims to land on a tiny target of just 20 square kilometers (7.7 square miles). It will fire its rockets to reduce its speed and hopefully touch down gently on the surface.